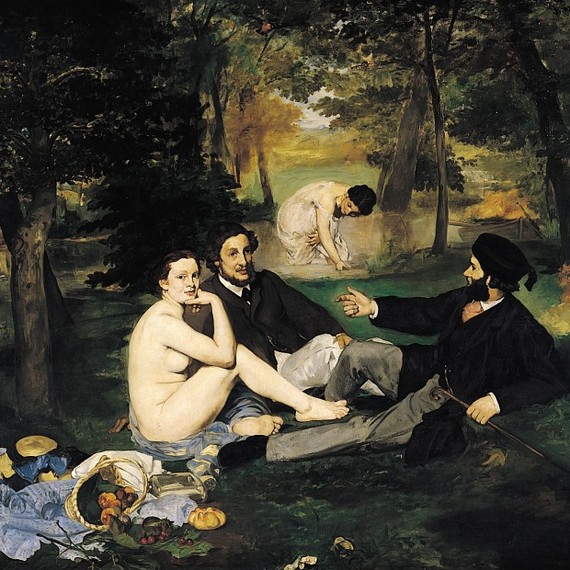 Once upon a time, etiquette was important: One needed to know which fork to use, which glass to sip from. Those days, my friends, are over. Now, questions of etiquette mainly revolve around how many Instagrams each guest is allowed to take during dinner.

But there remains one corner of the world where table etiquette remains a vexing and important issue: at nude resorts. And it's a problem for a growing number of people.

"We're seeing a rise in 'nakations,' especially among people in their thirties,'" says Sue Nerud, spokesperson for the American Association for Nude Recreation. Exact statistics are hard to come by, however, since many nudists prefer to remain anonymous. (In fact, several nudists in this article spoke only on the condition their names not be used.) And while Nerud said recent studies show that nakations are great stress relievers, there remain those pesky etiquette issues -- which we are about to solve for you!

1. Towel On: "Naked butts at the table are a big no-no," says travel writer and photographer David Lansing, who likes to take off his press hat (and everything else) at nudist resorts around the world. For reasons of basic health and safety, everyone brings a towel to sit on. More proof that, as fans of the Hitchhiker's Guide to the Galaxy know all too well, a towel is "the most massively useful thing an interstellar hitchhiker" -- or hungry nudist -- "can have."

2. Just Because We're All Naked Doesn't Mean We're All Friends: "You should wait to be invited to a table," says Lansing. "This isn't like going on a cruise; even though there may be eight or 10 people at a large table, they usually all know each other, and there will be a very uncomfortable pause in the conversation if you just sit down at a table uninvited. That said, nudists are some of the friendliest people I've met and invariably you'll be asked to join one group or another for lunch or dinner. But do wait to be asked."

3. Listen to Your Mother -- Use a Napkin! "As a matter of etiquette," says advice columnist April Masini, "covering your private parts with a napkin while at a nudist event is good manners the same way not chewing with your mouth open is. We all know it's there; we all know what's happening; we don't need to see everything at dinner. Just because you take your clothes off doesn't mean you should strip yourself of manners."

SEE MORE:22 Recipes Everyone Should Know How to Cook

4. Some Don't Like It Hot: "Most nudists resorts will hold traditional barbecues, and first-timers need to be careful around the 'weenie roast,'" says Tom Mulhall, who owns the Terra Cotta Inn in Palm Springs, California, and blogs about nudism on The Huffington Post. Nor is the grill the only danger -- the dinner table, too, can be hazardous. "Don't allow your waiter to serve you a bowl of hot soup. He can spill into your lap," notes photography instructor Eugene Louie, who visits clothing-optional resorts for self-reflection.

4. Listen to Your Mother, Part 2: "Sit up straight," says Masini. "Good posture at the dinner table is always a way to show good breeding and good manners, but when you're nude, slouching and elbows akimbo are not only more noticeable -- they create a silhouette that is less attractive than if you have clothes on. Sit up straight!"

5. No One Will Pardon Your Reach: "Don't reach -- even if you think it's not a reach," says Masini. "Nude or naturist dining requires a greater margin of coordination and control. Without a bra, and with a well-endowed chest, reaching -- even a little -- may result in your breasts in the marinara sauce."

6. There Is Such a Thing as Too Casual. "Casual dining doesn't mean you can put your ankle across your knee, or your feet up on the coffee table -- even if it's an outdoor barbecue with paper plates," says Masini. "Reconsider the view others will have while eating." Of course, if you keep a napkin in your lap, this won't be an issue.

7. Eyes Up Here, Buddy! "I'd say the most important table etiquette for nudists is no staring," says Lansing. "It's not unusual for nudists to just wrap a gauzy sarong around them as they go straight from the pool (or beach) to the table, so you want to try really hard to maintain eye contact." Instead of discussing people's bodies, it's safer to talk about the food.

9. Chill Out: If you're nervous about dining in the buff, don't be. The resort owners I spoke to all said concerns about being naked usually go away after 15 minutes. Nude dining seems naturally relaxing: You don't have to think about what to wear (or dry-cleaning bills), and you never have to loosen your belt if you overeat. Although, actually, I can't think of a better motivation to lose weight than the fact that everyone can see your gut (and everything else).