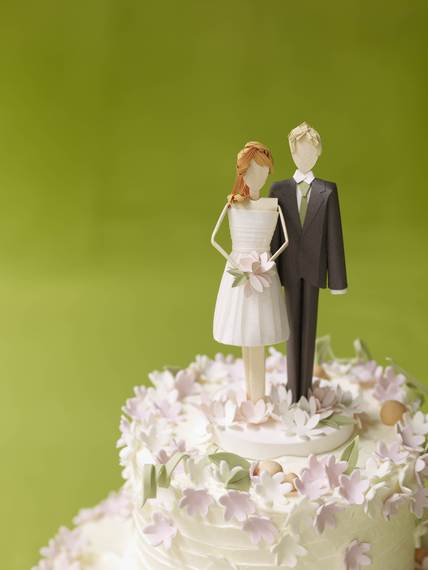 Five years ago you were out with your BFFs until 5 A.M. and locking lips with random hotties at the bar thinking, "Man, this is the life!" Flash forward to the present day and not only does the thought of a public makeout with a stranger at a dingy bar gross you out (ew!), but you couldn't imagine staying up that late on the regular. It's not that you're getting old...okay, maybe that's part of it. However, you've finally met someone who makes you want to settle down and be all domestic. If you didn't know already, here's 9 signs you're totes ready for married life.

1. You've officially kissed your sloppy drunk club days goodbye, well, for the most part anyway.
Your idea of the perfect Friday night now consists of takeout sushi from your favorite spot, a glass of good wine and a Netflix movie with your guy.

2. You treasure your girl time/alone time and aren't in the least bit worried about what he's up to when he's with his boys.
Poker nights are pretty harmless, plus you can typically expect a sweet text or two from him throughout the evening. Absence really does make the heart grow fonder.

3. You already have your future kids first and middle names picked out (for both sexes, obviously), although that's not to say you plan on popping out babies anytime soon.
But hey, if it were to happen, you wouldn't be too mad about it. He's got some good genes and heck, so do you!

4. Speaking of little ones, taking a pregnancy test all of a sudden isn't so terrifying, which is kind of terrifying in itself, right?
In fact, the one time you and your guy did have a scare you actually felt a slight twinge of disappointment (a totally foreign feeling for you) when it came back negative. Who would have thought the day would come...

5. You've either talked about opening or currently have a joint bank account for shared finances, like monthly rent, groceries, vacations and date nights out.
And while you may want to ring his neck sometimes, like when he forces you to walk five blocks in heels because he simply doesn't believe in paying for valet, ugh, you've somehow managed to make it work and make sacrifices on both sides.

6. Home is where the heart is.
In addition to bridal blogs, you increasingly find yourself perusing home décor websites more than your go-to fashion and beauty ones. What can you say; those pretty patterned throw pillows and Moroccan-inspired rugs are calling your name, and OMG, you've just got to get your hands on a midcentury bar cart or you might die.

7. You're comfortable (almost too comfortable) saying and doing pretty much anything around him and vice versa.
You trust him with your deepest secrets and wouldn't think twice about asking him to pick up tampons or a late night chocolate treat from the grocery store for you. Now, that's love.

8. You weren't sure it was even possible, but you love him more than your parents.
Sorry mom and dad! The love is different of course, however, he's officially snagged the number one spot in your heart and life and become your family, albeit not officially yet.

9. You don't hate doing his laundry (gasp!) and actually like cooking for him (double gasp!).
You still consider yourself a feminist and split chores. In general though, you just have this weird natural urge to take care of him and help lighten his load. Oh, the things you'll do for love, or rather, what love will do to you.

41 Bridal Gowns That Look Even Better From The Back