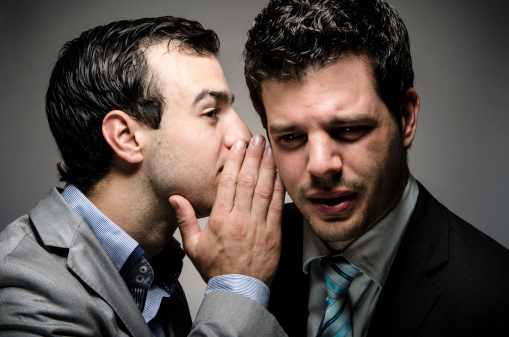 Powerful people talk in a healthy way, combining the right blend of confidence and humility. They share authentically with their hearts and inspire others to action. Check out these things powerful people never say so you can become even more powerful.

You don't see powerful people waste time protecting the status quo. Instead, they boldly ask the question "Why?" They're always pushing to take things to the next level, and they're not afraid to rock the boat when it needs rocking, especially when it's heading the wrong direction.

Ever heard someone say this when they're trying to act more transparent? Powerful people know that it's a waste of words to say things like "honestly" when it would only make people question their honesty the other 99.9 percent of the time. Powerful people stick with sharing the truth at all times and in all places without adding conditions or caveats. And they're loved for it.

Powerful people like problems. They love getting challenges for breakfast, lunch, and dinner, and converting them into solutions. They don't dodge responsibility, but embrace it with statements like, "That's on me" or "I'll handle this." When it comes to taking responsibility they dive in first, and when it comes to taking credit they put themselves last. Like Ronald Reagan, they realize "there is no limit to the amount of good you can do if you don't care who gets the credit." They choose respect over popularity, sticking with what's right over what's politically expedient.

You'll never see powerful people demeaning other people. Gossip is not in their DNA. They focus on the positive, knowing that their influence with others is only as strong as how well they treat everyone at all times.

It's surprising how some people say things like this as if they like the idea of killing dreams. Instead powerful people build up an immunity to doubt. They realize we'd all live in a very different world if everyone who ever had a big idea followed the bad advice to avoid pursuing it. Powerful people are willing to explore the impossible and live by the words: "I can do it."

Ever hear this one? These are the words of those who've surrendered themselves to circumstances and written off the possibility of changing it. Instead powerful people replace this with "What if?" They don't set limits on what they can change and influence. Like the doctor who's sent into the middle of a battlefield to rescue injured soldiers, they never give up, but do everything they can to make circumstances better all around them. They don't focus on finding themselves first, but look to create themselves by adding value and meaning to other peoples' lives.

These are fast becoming famous last words. Everything is connected now, and powerful people get that, and they maximize their efforts by working with and through others. To them, work and service are the same thing. They're never afraid to say "I don't know" or to ask for help, especially when they're leading. They don't let their pride get in the way, which creates unbreakable trust with others.

Powerful people avoid complaining like a deadly virus. They know that it's a waste of words, and that it robs people of power. Whenever they're tempted to complain, they think instead on a solution to whatever they're facing. Instead of saying, "I can't believe that guy just cut me off! What a jerk!" they go with, "That guy just cut me off. I'm going to slow down a bit so there's no accident here. And I'm going to listen to my favorite song to get inspired."

Powerful people do care what others think, because they care about others. They stay focused on how to share their story and join forces with others. They make every effort to connect with what others need and want. Wherever they go, they build friendships and expand their network to do things never been done before.

What things have you heard that aren't powerful? What above stands out most to you? Is it challenging the status quo, avoiding gossip, and/or taking your impact to the next level? How will you become even more powerful today?

If you liked this post, I'd love it if you'd hit the "like" button at the top of the page so I can continue to write and share with you on a variety of topics.