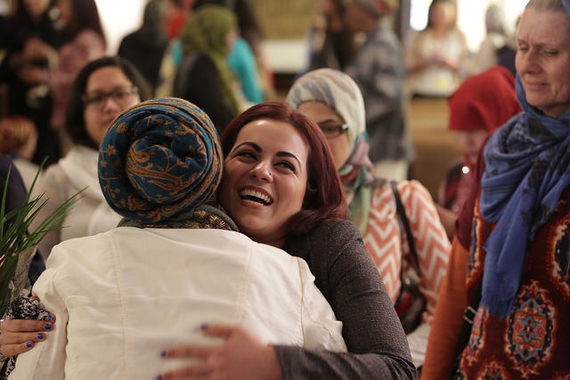 This past January, as global praise and media coverage poured in surrounding The Women's Mosque of America's first Friday jumma'a (congregational) prayer services, I started to pick up on something hidden beneath all the congratulations: "Good for you! It was a long time coming! You finally showed them!"

Instead of being seen as a celebration of Muslim women, the Women's Mosque of America was erroneously being framed as a "liberation" from Muslim men. As tempting as it may be to believe that we Muslim women are a monolithically oppressed group of Jasmines waiting to be saved from big bad bearded Muslim men, this couldn't be further from the truth. This sensationalized narrative about the mosque's creation revealed just how pervasive misinformation about Muslims is.

I spent my teens volunteering in the civil rights department at the Council on American-Islamic Relations in Los Angeles (CAIR-LA) post-9/11, a period when hate crimes against Muslims in America rose 1600 percent. As victims of death threats, harassment, and other hate crimes stepped into our national offices week after week, I learned firsthand that harmful stereotypes don't just stay on the screen; they have a direct and powerful impact on the communities they misrepresent.

It was at CAIR that I decided to pursue a career in media, to take ownership of my narrative as a Muslim woman. More than a decade later, as I watched the way the Women's Mosque of America's narrative was misinterpreted and reframed according to preconceived notions about Muslim women and Islam, I realized that I needed to share our story again -- in my own words as the mosque's founder.

Here are 9 things that you should know. (Please note: my views are my own):

9) The Women's Mosque of America was started by a team of Muslim women and men. Muslim men have been among our greatest supporters and allies at every stage in the formation of the Women's Mosque of America, from religious advisors to donors to the board of directors. We are especially grateful for the male imams who have reached out to offer their mosques for our prayer services, and who are working with us to develop our co-ed classes, events, and programming so that everyone can benefit from the female Muslim perspective.

8) Women's mosques exist around the world and come from a long legacy of women's involvement in Islam. Building a mosque was my childhood dream and prayer; it's something I've been collecting ideas and planning for my entire life. But the inspiration for establishing a women's mosque came in recent years, after learning about the thousands of Muslim women scholars and leaders who were actively engaged in the formation and spread of Islam; spending a year studying under an inspiring Shaykha at a Muslim women's college; and reading the riveting book Destiny Disrupted, which revealed the fascinating -- and surprisingly arbitrary -- history behind the formation of shariah (religious law). Although the Women's Mosque of America is the first of its kind in the U.S., women's mosques exist in at least a dozen countries around the world, including China, Syria, India, Egypt, Palestine, and even ultra-conservative countries like Yemen. 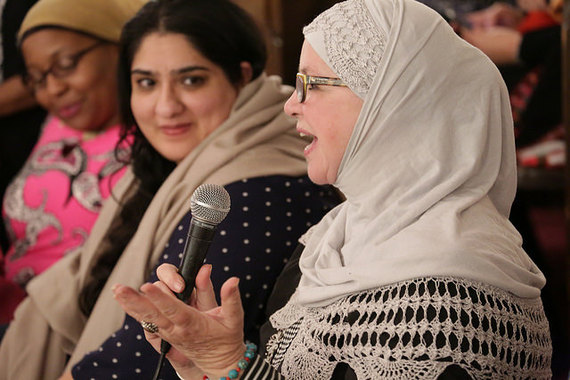 7) Your idea of what a Muslim woman looks and acts like is probably wrong. Quick: think of a Muslim woman! What image pops into your head? Likely, a woman wearing a black niqab (face veil), which is worn by a tiny minority of the 600 million Muslim women in the world and yet has become the primary image used to depict Muslim women -- the overwhelming majority of whom do not wear a khimar (hair-covering) as part of their hijab except during prayer. Additionally, American Muslims are the most diverse Muslim group in the world. Any race, ethnicity, culture, language, dress, or delicious food you can think of -- we got it. Muslim women are the second most highly educated female religious demographic in America, and we are so much more than the way we dress. The unhealthy post-Colonial obsession with our clothing -- both within and especially outside the Muslim community -- is utterly dehumanizing, and it needs to stop.

6) Segregation in mosques is not necessarily a sign of inequality. The five daily Muslim prayers are physically intimate and active. Although there are mosques in which there is no physical separation between men and women during prayer (including in Mecca), how a mosque chooses to segregate during the physical prayer varies according to cultural practices. Additionally, at the Women's Mosque of America, our segregated prayer services offer the comfort and empowerment of being surrounded by sisters - similar to the concept of a women's college or gym. For example, our April sermon was delivered by a survivor to mark Sexual Assault Awareness Month, and the sharing that happened in the discussion circle afterward was only possible because it was a room full of women.

5) There is no clergy or religious hierarchy in Islam. Anyone can be an imam, lead a prayer, or deliver a khutbah (sermon) -- including women. As Muslims, we believe that every human has a direct and equal connection to God, without intermediaries. We believe that all the prophets, from Adam, to Moses, Jesus, and Muhammad (peace be upon them all), were humans just like the rest of us. This democratic spirit is one of the most beautiful aspects of Islam, and it's not just limited to gender equality, but also translates into Islamic beliefs about social justice. Sometimes, this egalitarianism works against us, because without a pope-like leader, anyone can stand up and claim to speak for us, but these cases must always be balanced by the peaceable actions of the vast majority of 1.2 billion Muslims. 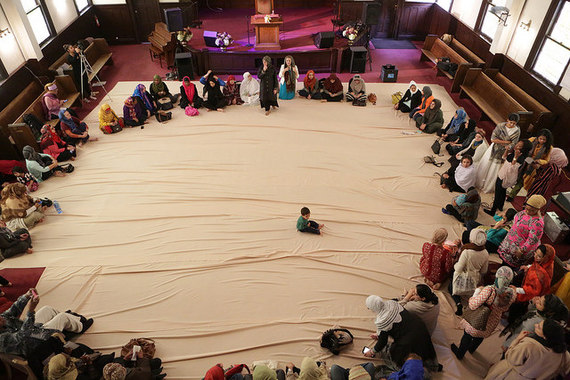 4) The "72 virgins" myth is not in the Qur'an. Similar to the Jewish community's relationship to Hebrew, most Muslims grow up reciting the Qur'an in its original Arabic without ever reading a translation in a language they understand. With Arabs making up less than 20 percent of all Muslims, this means that the vast majority of Muslims have no idea what's actually written in the Qur'an. In the days after 9/11, when verses of the Qur'an were being taken out of context and distorted, I read the Qur'an in English from cover to cover for the first time, and it proved to be the single most empowering act of my entire life as a Muslim woman. As important as it is to find out what is said in the Qur'an, it is equally important to find out what is not in it, so as to distinguish between cultural practices and actual Islamic teachings.

3) Muslim women love Muslim men. Muslim men are our brothers in faith, our helpers, our allies, not to mention our family members and trustees. Those beards that seem to scare everyone (but inspire hipsters worldwide) are inspired by the beauty of the Prophet Muhammad (peace be upon him), whom Muslims strive to be like in every aspect of our lives. Just like Orthodox Jewish women, we find our men's beards cute, sexy, and attractive. Indeed, we like big beards and we cannot lie... (Ok fine, maybe that's just me.) But when we see our men receiving scowls at the airport because of the way they look, it hurts us. When we see our boys bullied to the point that they choose to erase their Muslim identities or shorten their names (and facial hair) to blend in, it saddens us. If you want to support and help Muslim women, that means supporting our men, boys, and families, too.

2) The Prophet Muhammad (p) was arguably the greatest feminist that ever lived. There is a reason why "Muhammad" is the most common name on earth today, and why Gandhi himself praised our beloved orphan prophet. Aside from uniting the warring tribes of his region, closing the gap between the rich and the poor, and instituting the groundwork for his society to end the practice of slavery, the Prophet Muhammad (p) liberated women, fought for them to have the right to divorce and manage their own finances, and ended the practice of female infanticide in his region. He boldly rebranded menstruation as a woman's "precious" time, in the face of tribal views about it being shameful and quarantine-worthy. On a personal level, he did his own household chores, and he was younger than his beloved wife Khadijah (may God be pleased with her), who was his boss and actually proposed to him - something rare during his time (and even today!). I love the Prophet Muhammad (p) dearly because he always practiced the words he preached: "Among the best of Muslims are those with good character, and the best among them are those who treat their wives with kindness."

1) Muslim women are speaking. Are you listening? Muslim women have a multitude of voices and stories, and we have the ability to speak for ourselves. At The Women's Mosque of America, we welcome Muslims from every sect, cultural background, school of thought, and level of religious practice. We celebrate and respect the differences of opinion within our vast religion, and we believe that our community's diversity is a beautiful sign of Mercy from God. In that spirit, we use our mimbar (pulpit) to amplify the full spectrum of our diversity for the public benefit, and we regularly have interfaith sisters who join us each month as observers, participators, and supporters. When they congratulate us...there are no misunderstandings hidden beneath their praise, because it's clear to everyone in the room that we are here to celebrate our voices and proud legacy.

So who are Muslim women, and what do we have to say? I invite you to watch the video from our historic first Friday jumma'a service to find out:

To learn more about the Women's Mosque of America or to make a donation, please visit: womensmosque.com

A special thank you to Ayesha Mattu of the Love, inshAllah book series for her incredible and generous help with editing. I am so grateful for your love and light (and truffle popcorn)!