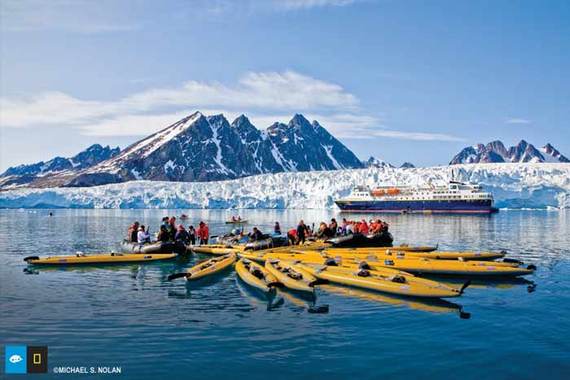 Whenever I open up an issue of National Geographic magazine, I immediately flip though the pages to preview the photographs. Though I later return to each article to read the text, the images are most powerful in telling the stories. One of the most exciting aspects of the Grosvenor Teacher Fellowship is the opportunity to learn from the expert photographers associated with National Geographic.

I am a totally inexperienced photographer myself and, armed with a hand-me-down Canon Power Shot, was determined to gain some skills. At our pre-voyage workshop in April, naturalists and National Geographic-certified photo instructors Michael S. Nolan and CT Ticknor presented a session on expedition photography that was very inspiring. I was fortunate enough to have both Michael and CT on my expedition through Svalbard, where I continued my learning. They both have the technical skill to help the most sophisticated photographers but also the heart to help novices like me.

These following expedition photography tips are not my own and must be credited to Michael and CT. However, I will provide my interpretation and examples of my own photos taken on the expedition. Still daunted by settings and white balance, I shot in auto mode, but I did try and pay attention to composition and create images that would help me tell a story.

1. Take an establishing shot.
Each landing we made, I tried to take a photo that broadly captured a sense of place -- usually with the ship in the background. The establishing shot provided useful context for the other photos. This is a shot of the beautiful isthmus at our last landing. The white sky and muted colors were otherworldly. 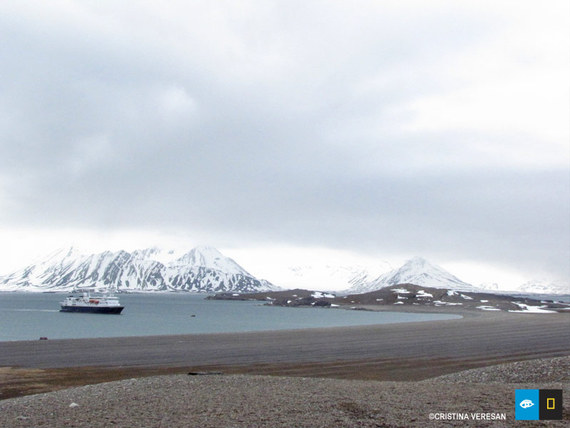 2. Leave space in the frame.
With the polar bears, it was temping just to zoom in and bullseye the animal in every frame. However, when I pulled back and left some space, I got powerful images of the bear in its vast landscape of pack ice. 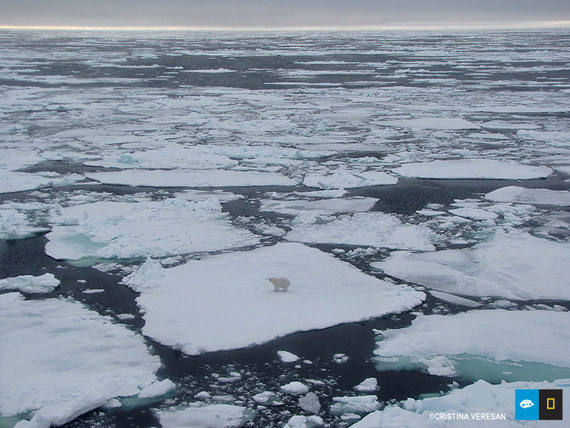 3. Rule of thirds.
When shooting landscapes, think of the frame as divided in horizontal thirds and group elements by thirds instead of halves. So, in this shot of water and sky, instead of half water and half ice, I aimed for two-thirds water and one-third sky. 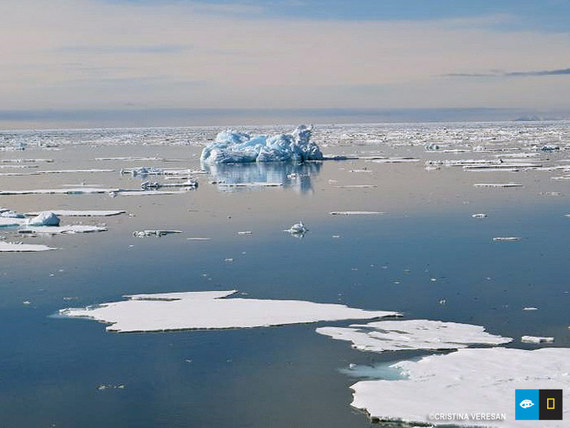 4. Light sets the mood.
Both the midnight sun and the silvery light in the high latitudes were like nothing I have ever seen. I looked for reflections and shadows. I tried to get up at different times, like this shot at 2 a.m., to capture the mood. 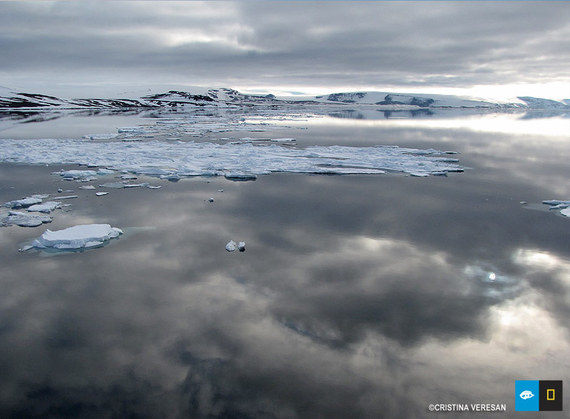 5. Get in close.
Though I did not have a powerful zoom lens, I did try and get in close where I could. One of the ways I could reasonably do this was by taking macro shots of the vegetation. I often lay down on the spongy tundra to get at ground level. Another way was to zoom in on a glacier face to capture the ice texture. 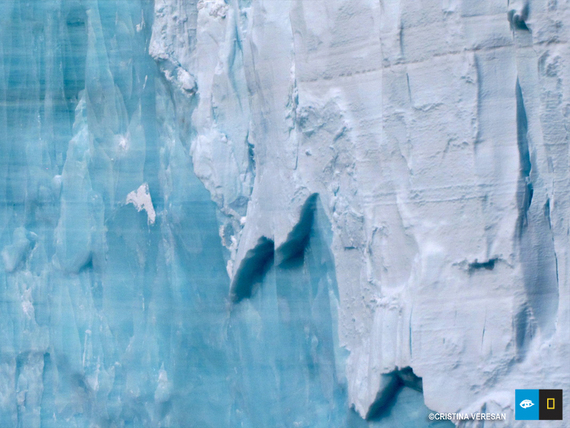 6. Use continuous shot to capture action.
Get to know your continuous shot setting! When capturing action, it is a great way to ensure you don't miss the look of the arctic fox, the take-off of the guillemot, or in this case the yawn of the polar bear! 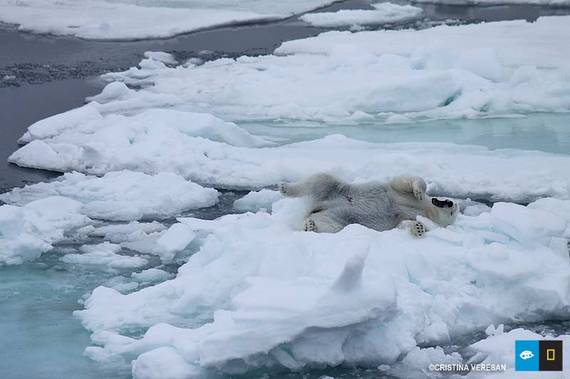 7. Consider the angle of your shot.
I tried to get the ship itself and other guests in some of my shots not only for scale and to establish the scene but to find new angles. During a visit by a curious polar bear, I went up a deck to get this shot. 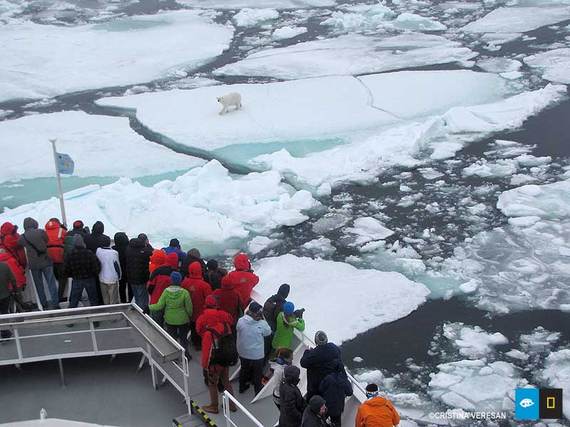 8. Layer your images.
I would often hear CT remind us of this when we were on hikes ashore. One easy way to accomplish this is to place something dominant in the foreground with an interesting background like this whale vertebra with hikers and the ship behind it. 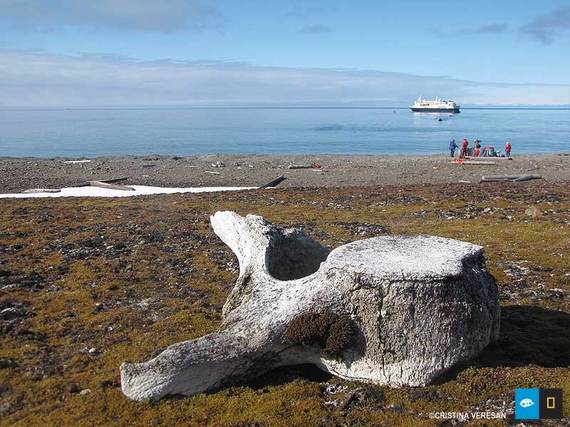 9. Get a sense of scale.
It can be much more powerful to know how big or how small a subject. After photographing tiny vegetation for several days, it finally occurred to me to occasionally put my finger in the shot for scale! Another example: I took a lot of shots of the bird cliff but this one with the Zodiac in it offers scale. 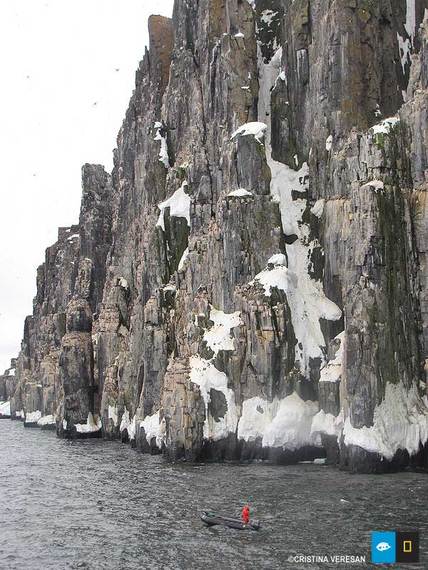 10. "Don't Point and Shoot -- Aim and Create"
This is a motto that Michael and CT shared at our April meeting that resonated for me while on my expedition. I did not want to come back having snapped thousands of pictures but not really capturing the landscape, the wildlife and my shipmates in a creative way. I am definitely more mindful of how to aim and create interesting images that tell a story. I am inspired to continue my own journey with photography. And one of these days, with a successful Arctic expedition behind me, I might even venture out of auto mode. 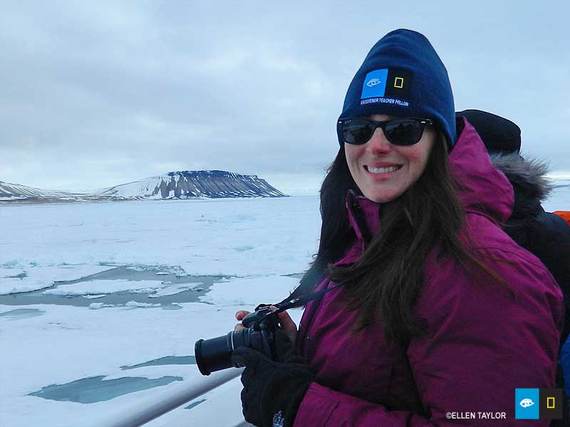