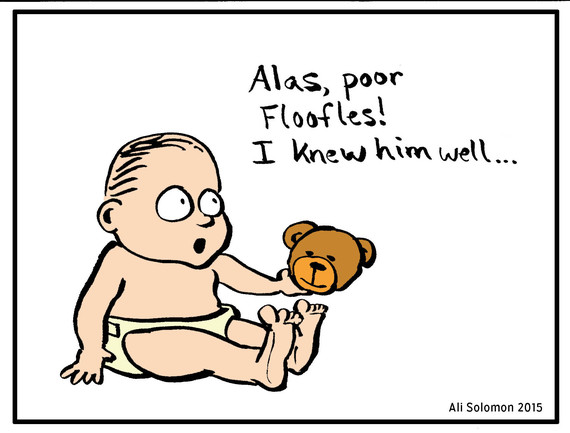 At six months old, my daughter grabbed Goodnight, Moon out of my husband's hand and said "book." We looked at her, then each other, and laughed nervously. "That totally sounded like she said 'book,' but there's no way." She pointed to it again and said "book." There was no mistaking it this time.

She learned colors, parts of the body, letters and numbers, a long and varied list of words to describe the contents of her diaper; each new phrase eliciting squeals of delight from us, shock from family and friends, but still no call from Mensa.

As a parent, all we want is to be able to communicate with our child, to know what they need, what they're thinking, and for them to understand us in return. While developing language skills early has some wonderful perks (I never get tired of hearing "I love Mommy!"), it hasn't gone exactly how we expected.

Here's the real low-down on having an early talker:

1. I'm not responsible for her verbosity.

I'd love to gain some serious mom-cred for this, but like most milestones, kids learn to speak when they're ready, at their own pace. There were no infant SAT prep courses; no Dr. Seuss-narrated Rosetta Stone; no "Sandra Boynton-Illustrates-the-Classics." Just lots of overheard chatter, Llama Llama Red Pajama, and probably too much exposure to the British stylings of Peppa Pig.

2. Talking is not the same as understanding.

At eight months old, my daughter pointed to a red Nerf ball by her feet. "Ball?"

Yes, it is a ball! I thought. Brilliant. She's talking!

She then pointed to my nose. "Ball?"

Well, no, not a ball, but I can totally see why she thinks that. It's...kinda...roundish.

Then she touches my phone. "Ball?"

Sighhhh. No, not a ball. Not even close. So much for my Annie Sullivan moment.

My infant had succumbed to the "I am Groot" approach to language development.

3. Infants and toddlers can be flawed communicators.

Young children are notoriously unreliable narrators. They heighten stories for drama, they confuse their own lives with plots from Disney movies, they spin complex yarns involving their toys. Once, I asked my toddler what she wanted for dinner, and she replied "glitter train." While I was thrilled that she was speaking actual words, I wouldn't have called it "communicating."

I thought being an early talker would help my shy daughter interact with others. Instead, she gets frustrated with kids her own age who don't respond the way she wants. As a result, she gravitates toward older kids, with predictably unsuccessful results.

The hardest part is when she turns her tiny face toward mine and sighs "But why won't she play with me?" And I have to find just the right words to say "Because A) she's fourteen, B) you don't know anything about One Direction, and C) You still wear diapers. Sorry, hon."

5. It's easy to get caught up in what other parents think.

This whole "milestone" business brings out a competitive edge in parents, and my daughter's verbal skills are hard to hide. To offset this, I find myself constantly highlighting my daughter's foibles: "Yes, I know she can recite poetry, but she struggles with iambic pentameter." Or: "Sure, she can count to 100, but her gambling problem is getting out of control."

I feel guilty downplaying her achievement, but at the same time, feel guilty showcasing it. Mostly, I want other mothers to know that we all have similar daily parenting struggles, regardless of how verbal our kids are.

6. They will learn different things at different paces.

Sure, my daughter latched onto language, but she took her sweet time learning to walk (not until almost 18 months). Despite her chattiness, reading is still a looooong way off. And at 3 1/2 years old, potty training is, to put it nicely, a work in progress (our couch is covered in more urine than a subway platform). I've grown to accept certain skills will take her longer to develop.

But at least we can have extensive conversations about why she's gone four days without pooping.

A year ago, my daughter was the flower girl in my sister-in-law's wedding. We hyped it up and prepared her, and she was excited to partake. Naturally, the day of the wedding, she woke up from a nap super-cranky, and refused to walk down the aisle. As I dragged her screaming, writhing, crinoline-swathed body toward the altar, you could hear the murmur of the guests tsk-tsking her meltdown. Afterward, as I lamented her failure to launch, my brother-in-law reminded me: she was only two years old. Petal-scattering tantrums are totally normal.

Goddamn it, my daughter sure latched on to those early.

More:
Toddlers communicationParenting language developmentChildren
Newsletter Sign Up
Raise the kind of person you'd like to know
Subscribe to our parenting newsletter.
Successfully Subscribed!
Realness delivered to your inbox