A few weeks ago, I published a blog post on HuffPost Parents about how I chose my large family and none of my six boys were "accidents," and here came all the "environmentalists" calling names (breeder, selfish narcissist, ho -- for sleeping with my husband, no less!) and whining about overpopulation and bemoaning the state of the earth and its far too many people.

It was all really ironic, because I'm actually an environmentalist myself and spent months as a reporter raising awareness about my city's disappearing trees and developers' standard tree-razing practice to build the most houses in the least amount of space.

Before I even had kids, I did years of research on how to live frugally, earth-consciously and intentionally so I could raise my family with those values that were so important to me.

But this article is not a defense, because the haters don't really deserve that. This article is about the (largely unexpected) ways my half dozen boys have made me green. 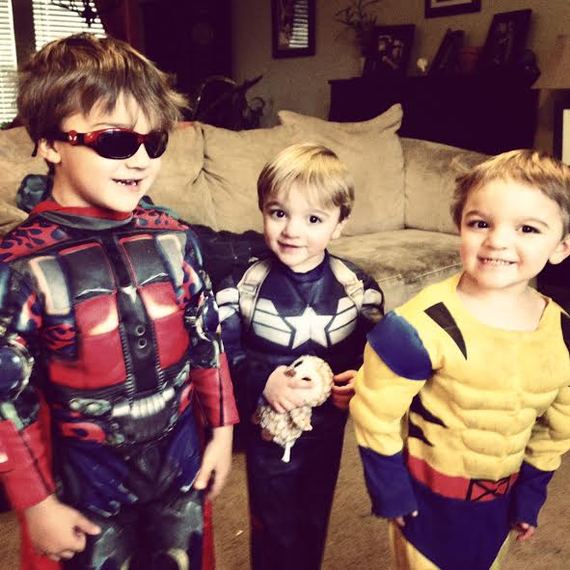 So, without further ado...

1. If it's yellow, let it mellow. They don't flush the toilet. Like, hardly ever. If I want to go to the bathroom, I better be using my own, because theirs has been mellowing for days. And it smells.
Saves on: Water and waste water.

2. Bath water can be reused. That's right. If one brother has already finished his bath and left the water in the tub, another brother will get in and wash anyway. And while we're on the subject, I'll admit that their daddy and I only have time for showers every two or three days, so... winning. (Don't worry. We make our own deodorant. No, really. All you need is organic corn starch, baking soda, coconut oil and an essential oil of choice.)
Saves on: Water, waste water, energy.

3. They'll wear the same Iron Man costume with nothing else underneath it for four days straight. Or the same pair of pajamas. Or the same sweat pants. They're not picky at all. They just want to wear what's comfortable. For a week. This saves us the most in the summer, when it's too hot in Texas to wear clothes. They just run around in their swim trunks instead.
Saves on: Water, waste water, energy.

4. Paper of any kind is good for drawing. This means their brother's class list for Valentine's Day is a good place to draw that 2-year-old version of a spider. So is that flier for math camp registration and the seven million other pieces of paper that come home in school folders and clutter up our counter.
Saves on: Paper waste.

5. Sharing is caring. If one pulls out an organic apple and puts it down, another will find it and finish it. No food is wasted around here. And when they're finished, someone will find that apple core and take it outside to plant seeds and feed birds. (We're still waiting for those apple trees to start sprouting, but I hear Texas isn't so great for growing apples, because it's ten thousand degrees here.)
Saves on: Food waste.

6. They prefer unpackaged foods. Actually, that's not true. Give them a choice between a chocolate bar and a piece of organic fruit, and they'll take the chocolate bar (unless they ask their parents... in which case they'll take the fruit). But their daddy and I stick to the peripheries of the store, so they don't really know what they're missing until they see what's packed in all the other kids' school lunches. They'll thank us later. So will the environment.
Saves on: Energy required to package foods.

7. What's TV? It's been years since we got rid of cable and threw out the television. Our boys spend their days outside making movies with an old camera or pretending fallen tree branches are light sabers or creating hole-in the-yard art masterpieces their daddy and I will trip in later.
Saves on: Electricity, consumption messages spread through commercials.

8. Weeds are just another word for flowers. Our boys gather them into a bouquet for Mama. They give them to the neighbor girls. They pick the dandelions and make their wishes. We have no use for herbicides, and guess what? We have the greenest yard on the block. Weird.
Saves on: Chemicals leaching into groundwater.

9. Energy is free (and plenty). We live half a mile from our boys' school. So we walk or ride bikes or race on scooters. A little more than half a mile down the road is the neighborhood park. A mile down the road is a frozen yogurt shop and a pizza place, perfect for the monthly family night out. After all that, our boys will still have energy left over. One of these days we'll find a way to bottle it up and patent it for selling. Or just drink it ourselves.
Saves on: gas, emissions from a car.

So, I can only say to these six wonderful little people: Thank you. You have made the world a better place in so many ways.

I'm so glad you're here.

More:
Environmentalismparenting humorParenting ParentsEnvironment
Newsletter Sign Up
Raise the kind of person you'd like to know
Subscribe to our parenting newsletter.
Successfully Subscribed!
Realness delivered to your inbox