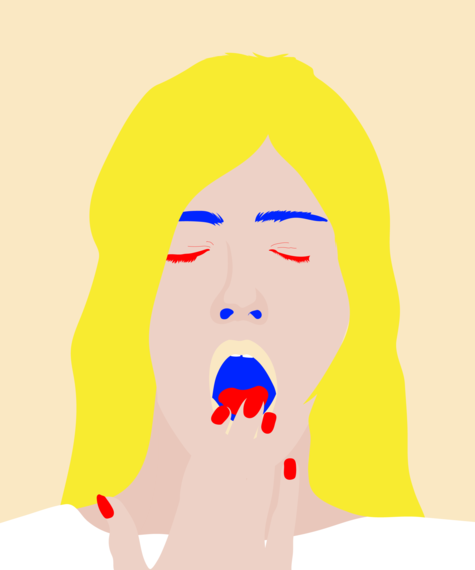 Eventually, everyone wakes up, but only a select few do so with grace. Okay, grace is probably a lot to ask from people first thing in the morning. But, if there were a way to make the early hours easier, you'd want to know about it, right?

For this story, we went straight to the source -- by sending out a survey to our staff, asking for advice from the real-life morning people among us who don't just survive the morning, but also thrive in the early hours. They offered us their tried-and-true tricks, and then we also chatted with Joyce Walsleben, RN, PhD, of New York University's Sleep Disorders Center, to understand why these tips work. In doing so, we found the advice you really need.

You've probably heard a few of these before, but have you heard what TV can do for your morning routine? Ahead, nine tips to getting up and getting through the morning. Even the biggest of night owls stands a chance at catching the worm with these. 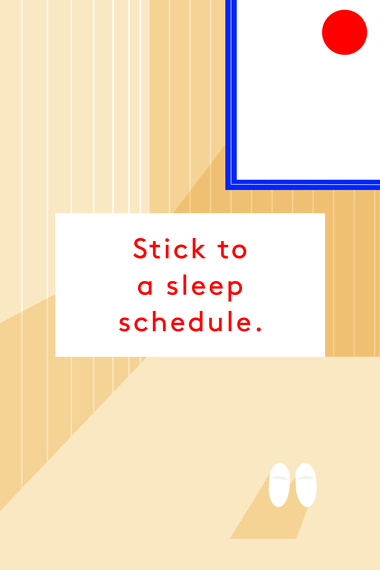 Stick to a sleep schedule.

Let's get the most obvious one out of the way now: When asked for tips, a veritable chorus of morning people sang the virtues of sleep -- know how much sleep your body really needs, set a time that you have to be in bed by each night, and more. Not to sound like a broken record, but it's true -- sleep makes a huge difference in how you handle the mornings.

Dr. Walsleben told us switching to an earlier bedtime is the easiest (and most effective) change you can make. "It may be hard to fall asleep early in the beginning, but without sleep, waking will be nearly impossible," she said. If you find that you need help falling asleep, these tips are a good place to start. 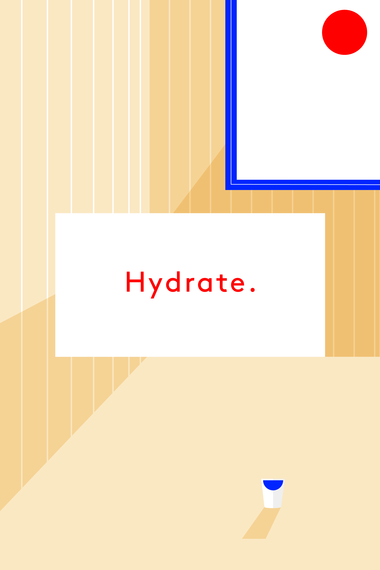 "Make sure you hydrate well before bed, and even during the night if you wake up. I keep a bottle of water next to my bed. I find it helps me be way less groggy in the morning," one R29er told us.

You probably don't want to overdo it before bed (because then you'll need to wake up to pee), but at least one small study from 2012 supports this tactic. After inducing dehydration via exercise in 25 women, researchers found that it had a negative effect on young women's mood, concentration, and cognitive functions. So, it stands to reason that if you go to bed dehydrated, you will wake up dehydrated, and you may feel even groggier because of it.

To check your hydration status before bed, take a look at your pee. If it's the color of lemonade, you're in good shape, but if it's darker, down a glass. 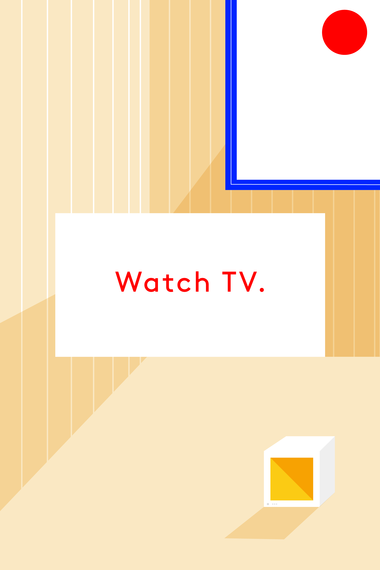 One R29er suggested easing into your morning with a little entertainment: "I watch about 20 minutes of CBS This Morning while I eat breakfast. It is a nice mix of informative and sort of fun, so it helps ease me into my day. Also how bad can waking up be if the only thing you have to do immediately is sit on the couch and watch TV?"

Dr. Walsleben says that anything that mimics morning light -- say, the light of the TV -- can, in fact, help you wake up: "Getting 20 minutes of morning light will help. [But] you can also use a bright-light device to mimic sunlight." Consider this your invitation to catch up on whatever you're currently hate-watching for your health. 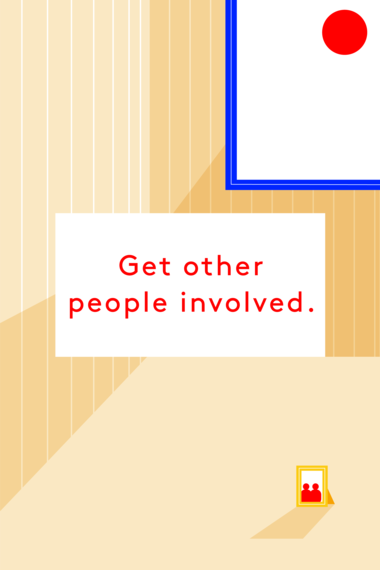 Get other people involved.

"Have a friend who is a morning person to make sure you are out of bed by a certain time," one person recommended to us, while another said talking to her roommates helps her feel more awake. Here's the thing: If you already know this works for you, great! But, if you aren't sure, Dr. Walsleben said that might be asking too much of your groggy self. "It's one thing to be up, but social may be pushing it," she said. As far as tips go, this one's pretty self-selecting -- just from reading this, you probably already know if this is a good move for you. 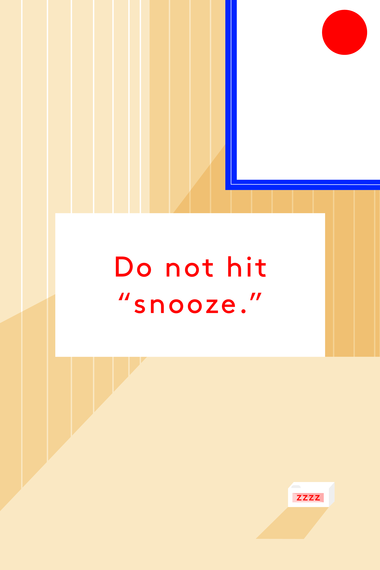 Do not hit "snooze."

"NO SNOOZING," one R29er declared via email (emphasis hers). "It only makes [getting up] worse."

"I agree," said Dr. Walsleben. "No snooze alarms! They are always a waste of valuable time. Either sleep or wake. Eliminate that in-between thing if you can." 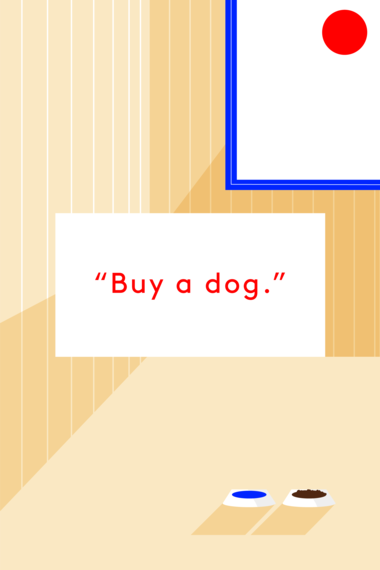 "Then, start walking him early in the morning. He will learn to expect it, and come cry into your ear until you get up at 6 a.m. each day!" another staffer told us. Sure, she was obviously speaking from experience, but Dr. Walsleben says it can't hurt to have a furry friend around in the wee hours: "Getting a dog isn't a bad, albeit expensive, way to go." After all, dogs offer a host of other health benefits, too. 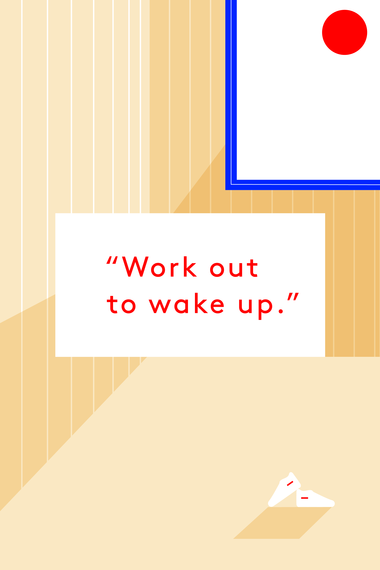 Work out to wake up.

Many self-described morning people credit an a.m. workout for their energy. "I feel as though I have already accomplished something early on in my day, and the endorphins don't hurt," one said.

"It's stimulating," explained Dr. Walsleben. Morning workouts are also a great time to reflect and mentally prepare for the day. Skeptical? Our morning workout challenge might motivate you.

Quite a few people added that the fear of being charged a cancellation fee ("looking at you, SoulCycle," one of them said) was motivation enough to get going and out the door. When all else fails, one person offered this too-simple hack: "Sleep in your gym outfit."

In summary, this staffer put it best: "Work out to wake up, but don't make that the only thing you do in the a.m.," which leads us to our next tip... 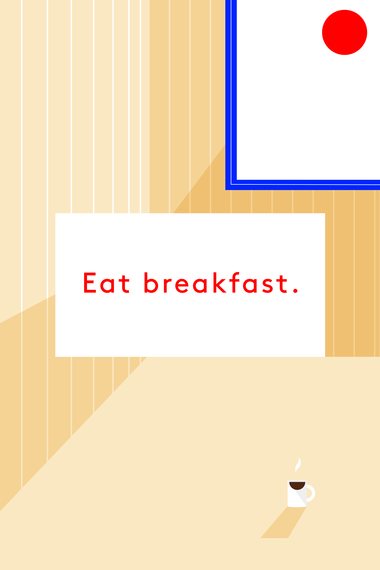 More specifically, "have a good breakfast," or "make an actual breakfast." In other words, don't head out the door with nothing but a half-eaten bowl of Cookie Crisp in your stomach. "Sugar is briefly stimulating, but may have a rebound of fatigue," said Dr. Walsleben. "Better to have protein, which will stick with you later."

Crunched for time? Here are just a few easy recipes that can help you get excited about the most important meal of the day. 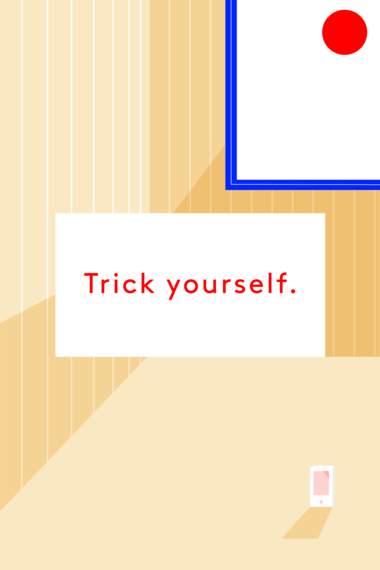 When all else fails, make it harder to hit snooze. One R29er leaves her phone (acting as an alarm clock) on her dresser, across the room from her bed, so she has no choice but to get up in order to turn it off. Another turns on bright lights and energetic music as soon as she's up.

Dr. Walsleben added that there are even alarm clocks that simulate a sunrise. Anything to greet the morning with a smile, right?