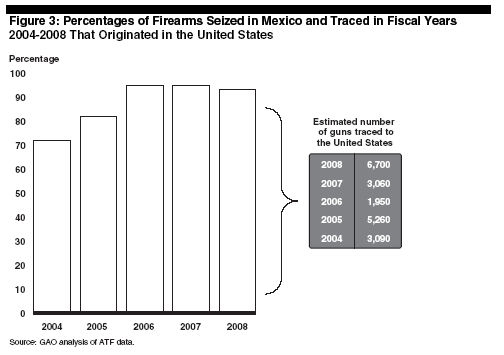 So much for NRA chief Wayne LaPierre's oft-repeated claim that Mexican gun traffickers don't bother to "trifle with paperwork at U.S. gun stores."

But how about the NRA's argument that the trace data shouldn't be relied upon since not every seized gun is traced through the Bureau of Alcohol, Tobacco, Firearms and Explosives (ATF) eTrace system (ignoring the inconvenient fact that not all crime guns here in the good old U.S. of A are traced either). The report finds:

"While the eTrace data only represents data from gun trace requests submitted from seizures in Mexico and not all the guns seized, it is currently the only systematic data available, and the conclusions from its use that the majority of firearms seized and traced originated in the United States were consistent with conclusions reached by U.S. and Mexican government and law enforcement officals involved personally in combating arms trafficking to Mexico."

After explaining the bureaucratic and technical obstacles faced by the Mexican government in ramping up its tracing efforts (noting that some of the same type of "bureaucratic and resource challenges faced in Mexico" are also faced in the U.S.) the study reiterates that:

Consistent with the results of eTrace data, U.S. law enforcement officials who had worked on arms trafficking in Mexico and along the U.S.-Mexican border told us their experience and observations corroborated that most of the firearms in Mexico had originated in the United States. Furthermore, U.S. and Mexican government and law enforcement officials also stated this scenario seemed most likely, given the ease of acquiring firearms in the United States; specifically, they told us they saw no reason why the drug cartels would go through the difficulty of acquiring a gun somewhere else in the world and tranporting it to Mexico when it is so easy for them to do so from the United States.

Well, who are you going to believe? The law enforcement personnel who actually face down drug and gun traffickers on the U.S.-Mexico border, or Mr. LaPierre, who spends his time traveling I-66 between the NRA's headquarters and the studios of Fox News.

And what about LaPierre's assertions that Mexico's drug cartels actually spurn the military style weaponry freely available in the U.S. civilian market and instead purchase full-auto machine guns on "the transnational black market. " The GAO study finds that:

there have been some examples of military grade firearms recovered in Mexico. Some of these recovered firearms, ATF officials noted, were guns commercially available in the United States that were altered to make them more lethal. For instance, AK-type and AR-15 type semiautomatic rifles have been altered to make them fully automatic, like machine guns used by the U.S. and Mexican militaries. Seventy machine guns were submitted for tracing to ATF beween fiscal year 2004 and fiscal year 2008, which represents a small percentage, 0.30 percent, of the total number of 23,159.

Will these new facts have any effect on the NRA? Of course not. Why would they? Facts don't matter to the gun lobby. In fact, it's information that they fear the most (e.g. Tiahrt Amendment). The goal of the NRA and its gun industry partners is to sell as many guns as possible--regardless of where they end up or how they're used. More dollars for the industry. More potential supporters for the NRA. And if it means you're going to end up with a de facto border war on America's southern flank, well, that's the "price of freedom."

Will these new facts have any effect on the Obama Admininistration, which with the stroke of a pen could use its executive powers to strictly enforce existing restrictions on the import of "non-sporting" weapons such as AK-47 and PS90 assault rifles (a ban--separate from the now-expired 1994 federal assault weapons ban--first imposed by the George H.W. Bush Administration, tightened up by the Clinton Administration in the wake of gun industry efforts to evade it, and abandoned by the George W. Bush Administration).

That remains to be seen.