In just 12 months, the first phase of the 9/11 Memorial will open -- and New Yorkers, Americans, and visitors from around he world will be able to see the Memorial pools. For the past 3 years, I've had the privilege of being able to document the process of planning, designing, and building the Memorial and Museum. These images -- shared below -- are just a glimpse of what will be.

"A voluminous photo archive. Some of the photos of the memorial's construction will be published as a book; pictured here are other photos of the center's artifacts, stored in Hangar 17 at Kennedy airport. Over the next few months, the memorial's staff will be making final decisions about what will be lowered by crane into the museum. Then the earth above, at ground zero, will be sealed over like a tomb, and the official memorial of one day in September will be nearly -- finally -- complete."

In an abandoned hangar once used by Tower Air, Hangar 17 at JFK is now home to some of the largest and most profoundly disturbing artifacts in the world. While most of us saw the Towers fall, either as it happened or in one of the many endless replays, you can't understand the scale of the destruction until you stand next to massive pieces of steel, bent and twisted from the terrible force of the collapse. Pieces of the building's façade--known as the "Tridents," with "save" scrawled on their rusting steel--are being prepared to return to the site. In the sealed, tented airplane hangar, crushed fire trucks, ambulances, and even a taxi cab await their return to the underground museum. There's even an entire PATH subway car. In one corner of the hangar, a large table serves as a command center for the restoration team, who are working to protect and preserve the fragile reminders and quickly fading posters that once adorned what is now known as "the last column."

The two massive "voids" that will be the centerpiece of the memorial will be placed exactly on the footprint of where the towers stood. Architect Michael Arad designed the memorial, which will have the names of the victims etched into the brass plates that ring the outer edge of the pools. A continuous flow of water will create a four-sided waterfall, with black slate on the sides and the bottom of the two pools. These pools, once they begin operation, will be the largest bodies of man-made moving water in the United States.

Steven Rosenbaum is an author, documentarian, and filmmaker. His 5-year-long longitudinal study of the design, development, and construction of the National 9/11 Memorial and Museum entitled: "Engaging Absence" will be published in 3 parts. The first element, a photobook, is slated to be released on 9/11/11.

You can see 86 original images of the construction and artifacts here.

9/11: A Glimpse Into the Future
WTC Memorial Construction 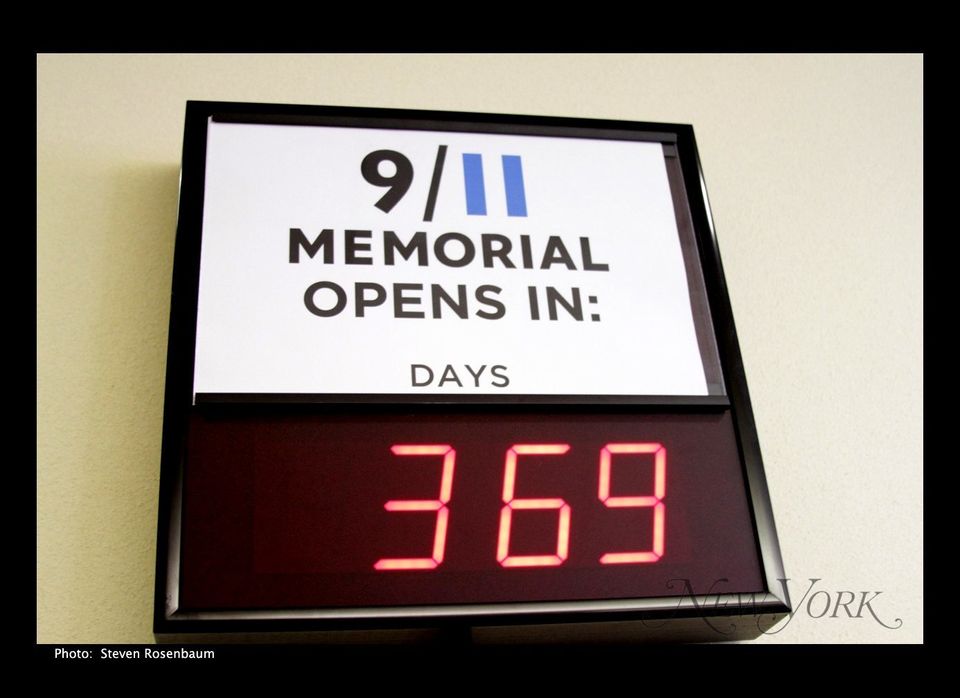 1 / 13
The Memorial Plaza Countdown Clock
This is one image from a larger collection viewable at New York Magazine's exclusive photo collection from the upcoming book: "Engaging Absence" by Documentarian Steven Rosenbaum. Link: http://nymag.com/news/features/artifact/67964/