"9/11 was not just a tragedy, it was the beginning of a terrible chaos we are still suffering from in the Middle East."

Those impassioned words are from Egypt's Bassem Youssef, the man often referred to as the "Jon Stewart of the Arab world." Youssef's view was echoed by others in the Arab world -- all Muslims -- whom I communicated with via email, phone and social media in the past week in an effort to get a sense of how they felt the Middle East had been impacted by 9/11.

On this 15th anniversary of the Sept. 11 attacks, we in the United States are rightfully focused on how that horrific tragedy changed our nation. It has affected all of us to some degree. For me, 9/11 was very personal in that it marked a turning point in my life. Prior to that fateful day, I barely had any connection to my Arab heritage and Muslim faith. But the demonization of Arabs and Muslims in post-9/11 America unexpectedly brought out both in me.

'9/11 was not just a tragedy, it was the beginning of a terrible chaos we are still suffering from in the Middle East.'

Before 9/11, I had never even visited the Middle East -- nor frankly did I want to go. But over the past 15 years as I have embraced both my Arab heritage and Muslim faith, I have travelled extensively across the region from Egypt to Saudi Arabia and just about every country in between for either work or pleasure.

I now have countless friends in the Middle East and have seen in person or via social media a more nuanced view of the effect 9/11 has had on the Arab world than the American media typically provide. So I reached out to my Arab friends (be they real or the Facebook type) to get a sense of how the Middle East has been impacted by 9/11 from their point of view.

Egyptian Karim Kasim put it plainly: "In simple words, the Middle East was doomed because of 9/11." Kasim, a 39-year-old political science researcher with an Egyptian non-governmental organization, explained that in the years that followed 9/11, the Middle East became a "battlefield" where the West waged "unjustified military campaigns." 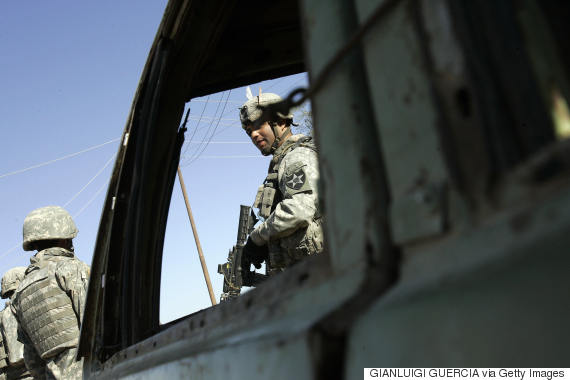 U.S. soldiers talk to Iraqi people (not seen) during a morning patrol in the streets of Baquba, November 2007. (GIANLUIGI GUERCIA/AFP/Getty Images)

Every person I communicated with pointed to the same event as being the number one tragedy to have befallen the Middle East as a result of 9/11: The Iraq War. And the impact of this war, as they noted, was more than just the hellish death toll of reportedly over 160,000 civilians killed. This war has unleashed to some degree so many of the grave problems plaguing the region today.

"The bloodshed in Syria, the terror of ISIS and a very dangerous increased Shia-Sunni split in the region are also what the Arab world has been forced to endure due to the Iraq War," remarked 36-year-old Jalal Ayoub, an Israeli citizen of Palestinian heritage who is a lawyer and radio host.

But the backlash of 9/11 for many Arabs extends beyond the war zones. As many noted, America's "war on terror" after 9/11 provided cover to some Arab leaders to crack down, often unjustly and viciously, on dissent in their own country. NBC foreign correspondent Ayman Mohyeldin, who is currently based in New York City but who was raised in Egypt and has reported extensively from across the Middle East, made that very point as a guest on my SiriusXM radio show Wednesday.

The "war on terror" enabled leaders in the Middle East, particularly the authoritarian ones, "to justify a lot of things that ... human rights organizations and observers and critiques would say crosses the line between the 'war on terrorism' and oppression and suppression," he said. And we see that to this day in places like Egypt and Saudi Arabia where political opposition is stifled under the guise of fighting terror.

Restrictions on dissent in many -- not all -- Arab countries even applied to jokes mocking those in power, as learned firsthand when I travelled the Middle East performing stand-up. Comedy producers would expressly warn myself and the other comedians that we couldn't tell jokes about the leaders of the country we were in at the time. And they weren't kidding as Youssef, who was wildly popular in Egypt, found out when he was arrested in 2013 for mocking then-Egyptian President Mohamed Morsi on his satirical TV show.

I was also amazed by how 9/11 had personally touched everyone I had been in contact with in some way. Rik Aby, a 36-year-old actor from the United Arab Emirates noted that, "traveling to the United States became very difficult" in the years that followed 9/11. And worse, he truly believes his denial of admission to an American university was simply because he was Arab and from the Middle East. "The school's rejection letter was dated September 14, 2001, and I knew other Arab friends also denied college admission in the United States with rejection letters sent literally days after 9/11," Aby explained.

Yes, America was the target of the terrorists on 9/11, but the victims of that tragedy go far beyond our soil.

But by far the most common response I heard about how their lives were negatively influenced by 9/11 was the sense that terrorist attacks had hijacked their faith, causing Islam to be seen by many as synonymous with terrorism.

Jordanian Amber Yusuf Barnett, a 40-year-old former flight attendant and now housewife noted empathically, "I hate how the Western media has defined all Arabs and Muslims as inherently bad." Obviously there has been a documented history of Hollywood films and TV shows demonizing Arabs and Muslims pre-9/11 as Jack Shaheen noted in his book and documentary of the same name "Reel Bad Arabs." But Arabs -- and Arab Americans like myself -- became more sensitive to the way Arabs were being depicted in the post-9/11 world.

Some in the United States may not get that people in the Arab world see the hateful words about Muslims by those like GOP presidential nominee Donald Trump in just about real time thanks to social media. So it was not surprising that many I communicated with raised Trump's demonization of Muslims during the presidential campaign, from his baseless assertion that "thousands" of Muslims celebrated on 9/11 to his proposed Muslim ban. It's clear that Trump is already damaging America's image abroad. 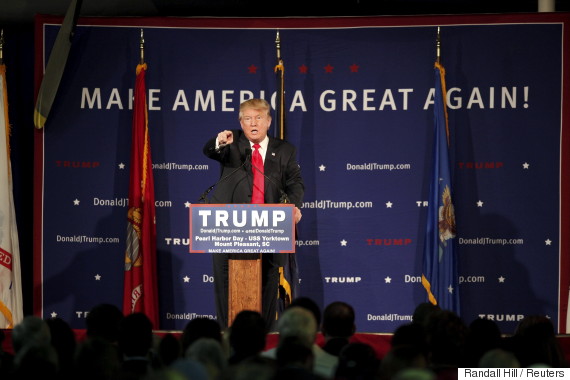 Ali Al Sayed, a 30-year-old comedian and comedy producer from Dubai who oftens visits the United States explained, "I have had to defend my religion and my beliefs for the past 15 years on social media in ways that people would have found too offensive to discuss prior to that vicious attack." Sayed added that in response to a drumbeat of lies about what Islam is truly about, "I now have to condemn and somehow prove that the Quran doesn't really want us to attack or kill anybody." He also rebuked Trump's claim that Muslims celebrated on 9/11.

As I got in responses from the people I reached out to, I noticed that there was also a sense of frustration with what is seen as the double standard of being Muslim in the post-9/11 world. Youssef laid it out succinctly:

"Why do I have to apologize for whatever tragedy out there because I share a religion, or a language or a skin color with the perpetuators? I don't see followers of any other religion having to go through this every time a tragedy happens."

Many in Arab world may hate American foreign policy, but they don't hate the American people.

Alarmingly, yet unsurprisingly, recent polls find that people from certain Arab countries such as Jordan (around 80 percent) and Lebanon (around 60 percent) hold decidedly negative views of the United States. Those numbers are worse than polling taken about a year after 9/11 where 53 percent of the people in several Arab countries held unfavorable opinions of America.

But despite these poll numbers, every person I communicated with made the same point: Many in Arab world may hate American foreign policy, but they don't hate the American people.

Anisa Abeytia, a 44-year-old writer living in the UAE, explained that in her travels across the Middle East, "People I spoke with usually made a distinction between Americans and American policy. They continued to view Americans favorably and not only wanted to visit America, [but many also] want to move there to pursue the 'American dream.'" The Arab world, she added, is still "rife with corruption and cronyism where the deck is stacked against them, but to many Arabs, America is still viewed as the place of opportunity where with hard work you can succeed." 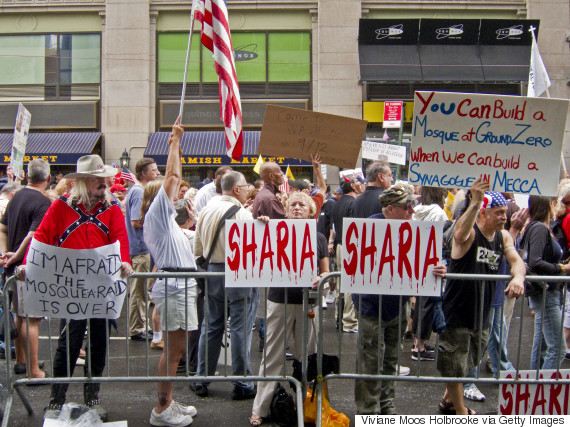 Demonstrators seen blocks from World Trade Center site and around the corner from site of a proposed mosque and cultural center. (Viviane Moos/Getty Images)

And Barnett, the former flight attendant, explained that in her travels between the Arab world and the United States she came across less Arabs who didn't like the Americans and "more Americans who didn't like Arabs." Some Americans "think either we still live in tents and ride camels or we are all terrorists going around killing Americans," she added.

I have to agree with Barnett. In my travels across the Middle East and in my conversations with Arabs, I have yet to hear any single person claim they were angry with the people of America. Every single objection has been grounded in grievances with our government's foreign policy from the Iraq War to drone strikes. But distressingly I have seen vile, hateful comments made by some well-known people in America such as Trump and others demonizing not the policies of Arab governments but the people of the Arab world, especially Muslims.

On this anniversary of 9/11, it's not enough that we simply examine how the United States was devastated by this tragedy. We should also be aware of how the Arab world has suffered and is still suffering so acutely. Yes, America was the target of the terrorists on 9/11, but the victims of that tragedy go far beyond our soil. And by recognizing that we will go a long way to building bridges between America and the Arab world based on something often missing from such discussions -- our common humanity.