A 9/11 memorial in Lafayette, La., was targeted by vandals on the eve of the 12th anniversary of the Sept. 11 attacks.

In a controversial bit of guerrilla "art," suspects attached two cardboard cutouts of planes exploding into the monument's model of the World Trade Center towers, KATC reported. The planes included references to the New World Order and the Eye of Providence, two popular themes among conspiracy theorists and truthers who question the details of the 9/11 attacks. 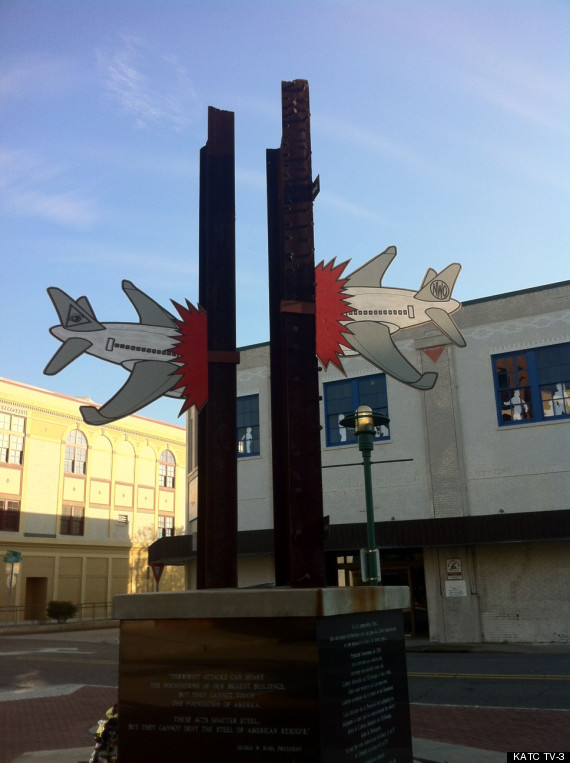 A viewer photo at KATC suggests a cartoon cutout of President George W. Bush was also found nearby. Police are reportedly searching for suspects.

The Lafayette monument includes three 13.5-foot beams from the fallen towers, used to create a 1-to-100 scale model of the World Trade Center. It also includes limestone panels from the Pentagon building and soil from the field in Shanksville, Pa., where Flight 93 crashed. The memorial was dedicated on Sept. 11, 2002, a year after the attacks.

Similar memorials have been defaced around the country in the past, sometimes in more malicious fashion. Earlier this year in New York, a group of young people tore off a plaque honoring local heroes from a monument and ripped down flags from the surrounding area. A few weeks later, vandals in Pennsylvania also pried off a bronze plaque from a Sept. 11 display.