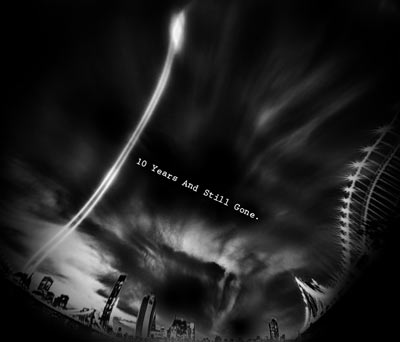 I recall an old college buddy's candid observations of 10 years ago. He spoke of the memory of the bizarre reality of a plane crashed into the idyllic morning of downtown New York City. How when the planes hit that body parts rained down onto the streets and sidewalks. That macabre description transferred an imagery that added to my own as I watched far more "safely" from about 30 blocks away in midtown that fateful day.

He described the panic, as there was realization that the buildings were falling from people who had come far too close. As the towers fell, people raced over one another to get away in sheer animal-like panic. He described on how those he passed-by in that mad scramble did not make it. When the debris hit, filling the air with the dust many would carry in their exodus out of the city later on, he described it as is trying to put your face in sand and attempting to take deep breaths. The dust was thick and choking, and those panicked scrambled survivors found it impossible to get even a breath for what seemed an eternity. Imagine escaping that crazed lunacy of the buildings falling only to feel that you are now suffocating, covering in that white miasma.

He walked in a dull shock along with so many others, crossing the bridge into Brooklyn. His visage can be seen from in some newspaper photo, his girlfriend holding a just as bewildered small dog. I'd find the photo, but I do not even want to see it again. It is part of those memories that come tumbling out each time a year. I don't want to add other photos to mesh into that locked box that pours out of me each September. Don't think I could take much more added in anymore.

It haunts me to even write about that conversation, just as it haunts me to even write another piece about 9/11. I have usually repeated my piece from 2007 each year feeling that I had no further words to give on the subject. Well, now it is 10 years later, and though those who died are still gone, it is those survivors, this nation, that also seems to be missing since then.

In 10 years, it seems we have not walked very far from those towers fall. Where an area still sits waiting to be rebuilt is no different than our shattered psyches and memories that still leave us haggard and covered in a foul dust even years after. Where each year high-powered lights blaze to fill that empty space to show the ghosts of two towers in the night's sky. Yet what fills the space in our empty hearts and minds since then? What light straightens our staggered souls?

That idyllic morning is far-gone. That halcyon daze of being outside the whims and schemes of religious zealots tumbled along with each floor of the towers that morning. The pitch-black smoke of jet fuel melting metal, people, offices, and building material has fouled far more than a morning air. For in 10 years we are no different than those on an exodus from Manhattan, trudging along with soured acrid air filling raw lungs and throats, while covered with soot and detritus.

I sit and wonder if Pearl Harbor stood the same for many people as long as ground zero has sat forlorn. But upon some research, it does not appear so. A week after the Attack on Pearl Harbor began one of the largest salvage operations in history. By just over a year later, several ships were repaired, some actually then serving in battle during WWII.

We as a nation have not done enough with the World Trade Center ground zero. It lies unfinished like so many other things that America used to stand for before two jets slammed into the Twin Towers.

A lethargy and heavy weight still drags upon us as a country and a people. It has been a massive albatross around the neck of a nation who has not been able to do much right nor been able to step past it.

Time is supposed to heal all wounds they say. Instead, it has been more like Groucho Mark's remark: "Time wounds all heels". A nation of downtrodden lost, and bewildered souls crossing some sort of bridge of 10 years, feet aching, still wondering what happened and when would things ever be the same again. For everyday ground zero lies undone while this nation sinks further into recession is another stone to bear upon already drooping shoulders. How much more can we take? How long must we wait to step forward?

For everyday more rhetoric spout from politicians, groups, and fears assail us from our media channels and websites. With no solution or progress, we will continue unable to heal. Instead it will sadly serve to seal our fate as a doomed generation, unable to move much past that bridge that we have been stuck on now for a full decade. Every year, that gaping wound grows bigger, further separating who we are and who we were. One day, we might not even recognize who we were on that other side. Then the terrorists victory that day would be complete.