Tea Party protesters trying to tout the size of their march on Washington last weekend have been passing around a photo of a packed National Mall. But the picture is years old.

Politifact asked Pete Piringer, public affairs officer for the D.C. Fire and Emergency Department, if the rally was big enough to fill that space. Piringer said no -- and moreover, the picture can't be from 2009. 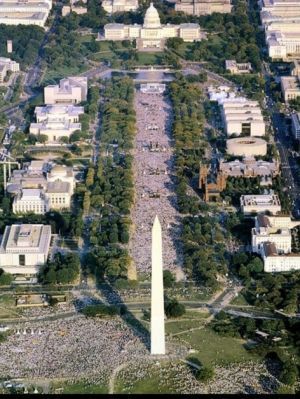 "It was an impressive crowd," he said. But after marching down Pennsylvania Avenue to the Capitol the crowd "only filled the Capitol grounds, maybe up to Third Street," he said.

Yet the photo showed the crowd sprawling far beyond that to the Washington Monument, which is bordered by 15th and and 17th Streets.

There's another big problem with the photograph: it doesn't include the National Museum of the American Indian, a building located at the corner of Fourth St. and Independence Ave. that opened on Sept. 14, 2004. (Looking at the photograph, the building should be in the upper right hand corner of the National Mall, next to the Air and Space Museum.) That means the picture was taken before the museum opened exactly five years ago. So clearly the photo doesn't show the "tea party" crowd from the Sept. 12 protest.

"I've seen bigger crowds at Montreal Expos games, but I still wouldn't fake a photo just to justify your predictions of millions descending on Washington," said one gleeful Democratic media strategist. "This is grade-A stupid and just plays into the argument that these were astroturf protests to begin with. They've always brought the noise, but the question that was supposed to be answered this weekend was, could they bring the numbers? In that respect this was an unmitigated disaster."

The photo had been circulated on blogs and Twitter. A number of conservative blogs have since taken the photo down. Some have corrected their posts. Others say the circulation of the picture was a left-wing conspiracy to discredit the event. However, many of them are still claiming that at least a million people attended the march. Nate Silver estimates about 70,000 protesters showed up.

It isn't the first failed attempt by the protesters to inflate the size of the event. On Saturday, organizer Matt Kibbe announced on stage that ABC News had estimated a crowd of 1 to 1.5 million. ABC News had reported no such thing.