At the Congressional Black Caucus (CBC) Annual Legislative Conference last Friday, Sept. 16, I heard a black former director of the National Park Service describe its development since it was formed in 1916 to protect the first 34 national monuments. He's been a leader in the agency for almost half its existence, since Director Stewart Udall sought to integrate the system in the early 60's, and sent aspiring park ranger Bob Stanton from Texas into exclusive Jackson, Wyoming to work in Grand Teton National Park.

I heard 95-year-old Ranger Betty Reid Soskin whose American experience spans more than half of the 240 years since we became a Republic - her enslaved grandmother being a role model in her life till she was 27. The sprightly ranger who not only worked in the Richmond shipyards during WWII but returned to lead the creation of the park commemorating that legacy said, "The National Park System attracts and educates the middle class. So if we want more people of color to utilize our parks, we can start by bringing more of us into the middle class." 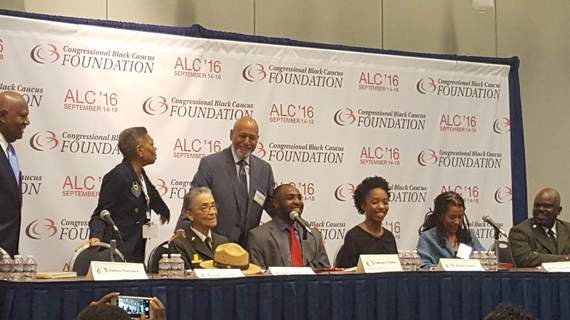 "Standing with National Park Service Director Jon Jarvis on the street in Marion, Alabama between Zion United Methodist Church and the old city jail just blocks away from where Jimmie Lee Jackson was murdered in 1965, on the day before the designation ceremony for the Marion to Selma Connecting Trail was a life changing experience," reported millennial Clarence Fluker, Deputy Associate Director of National Parks and Youth Engagement at the White House Council on Environmental Quality. "Never had it resonated with me so intensely the importance of the National Park Service's role in protecting, preserving and sharing America's diverse history through our cultural and historic sites. There is something so salient and powerful in the reflections about the past, while making sense of the present and looking toward the future brought on by standing in a place where history was made and you can see yourself in it."

"I never imagined I would become a diver and work with other young people like myself to identify underwater wrecks in South Florida," said Rachel Stewart, a junior at Tennessee Technological University majoring in Civil and Environmental engineering. "Some of those ships may have brought our enslaved ancestors to these shores. Because of my mentor Kenneth Stewart and the Tennessee Aquatic Project, I was able to spend the summer diving and teaching at Dry Tortugas National Park, capturing invasive lion fish and experiencing the amazing coral reefs. I'd like everyone to know that we have these opportunities."

"I took my parents to the Martin Luther King Jr. National Historic Site when they visited me in Atlanta," said Dr. Carolyn Finney. "My father grew up in the South and has terrible memories. We walked into an exhibit and suddenly he grabbed my arm. I turned to look at him and his face was frozen. I followed his eyes and saw the sign, 'Whites Only.' Then he relaxed and smiled in relief. He told me that for a moment he thought he was back in the old south. At the end of the day he said 'You know, when you told me we were going to a national park I didn't think I'd have a good time. But I really did.' Seeing himself in that exhibit and what he went through in his life was a cathartic experience."

The Superintendent of the Great Smoky Mountains National Park, one of the most highly visited and accessible to 50% of the American population within a day's drive, Cassius Cash' boyish energy and enthusiasm boiled over when he held up his old Boy Scout belt that his mother brought out on a recent visit home. "It's funny how your life follows a path," he said, "because the first badge I won was for the environment." Superintendent Cash talked about the importance of showing Americans that the parks belong to everyone and they can be life changing. He mentioned the vital process of "on-boarding" new employees in a way that makes them feel part of the family, and invited the audience to join him on a "100-mile hike" that he's been making with citizens for the past several months.

As I listened to their stories, I felt gratified by the myriad different ways these Americans relate to our national parks. Sponsored by Congressman Alcee Hastings, the session "Creating Communities for Conservation: The Legacy of African Americans in the National Park System," was put together by Frank and me as members of the Next100 Coalition. Proceeds from the session will go to the Congressional Black Caucus Brain Trust to address how the Park Service could do a better job of engaging the full diversity of the American public.