League of Women Voters founder, Carrie Chapman Catt served as president of the National American Woman Suffrage Association (NAWSA) on two separate occasions. The second time she assumed the leadership in 1915, Catt saw a mature suffrage movement. Catt evaluated both the external political environment as well as the internal political environment of the suffrage movement and saw both crisis and opportunity. While NAWSA remained focused on getting the vote for women, it was divided as to strategy and tactics. Some wanted to focus on the federal amendment and some saw no way forward on the federal amendment until the states had granted women voting rights; while others had defected to Alice Paul's more militant Congressional Union. By 1915, 12 states had granted women voting rights.

Catt saw crisis in continuing opposition in Congress to a federal amendment to give women the vote. But, she also saw opportunity in the progress that women had made over the 60 plus years of the suffrage movement. American women in 1915 were more educated than ever before; they were entering occupations previously barred to them, especially within communities of faith where they had convinced major denominations to support the vote; women controlled much more property and were a greater presence in the workforce.

Catt saw this and more; she saw a vast reserve of suffrage supporters:

Behind us, in front of us, everywhere about us are suffragists, -- millions of them, but inactive and silent...There are thousands of women who have ...been members of our organization but they have dropped out... There are still others who, timorously looking over their shoulders to see if any listeners be near, will tell us that they hope we will win...but they are too frightened...to help. There are others too occupied with the small things of life to help...There are men, too, millions of them waiting to be called. These men and women are our reserves...the final struggle needs their numbers and the momentum those numbers will bring.

In 2015, it is all too easy to look around at the external political environment and again see crisis. Voting rights that once seemed secure under the landmark Voting Rights Act of 1965, are again under attack. Congress appears incapable of restoring this critical guarantee of universal voting rights. But where there is crisis, there is also opportunity. 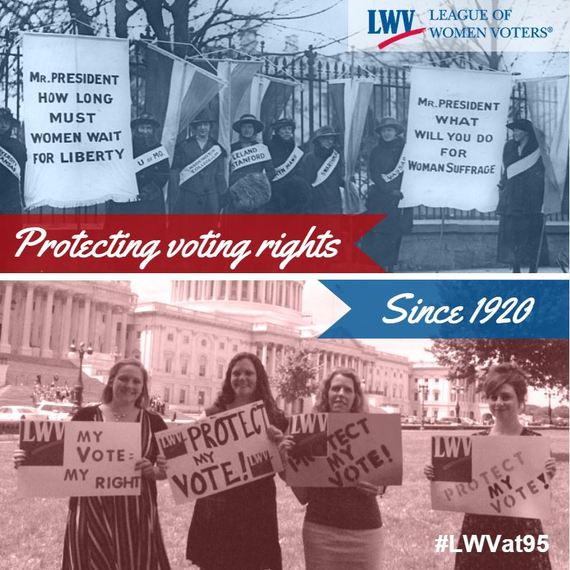 During the final push for women's suffrage, Catt called for a League of Women Voters to "finish the fight" - the fight to ensure that our democracy is truly a government of, by and for all the people. She saw in giving the vote to 23 million women, a political force motivated to serve the greater good and the cause of free and fair access to the polls.

The League adopted Catt's charge and has tenaciously defended our democracy, keeping the power in the hands of the people for the past 95 years. We've educated millions of voters, both men and women alike, about the power of their votes, and we're still committed to universal suffrage and ensuring our elections are fair, free and accessible to all eligible citizens.

Today, the League and our voting rights partners are working to protect and expand voting rights across the country. As part of this work, the voting rights community is reaching beyond our traditional base to engage new supporters to rally alongside us as we call for proactive reforms to modernize and improve our elections systems like online voter registration and expanded early voting opportunities, while also advocating against attacks on voting rights like voter photo ID and proof of citizenship requirements. We'll need our new "reserves" to join us as we call on Congress to restore the Voting Rights Act of 1965 which was gutted of its key provisions by the U.S. Supreme Court two years ago.

Ninety-five years after women won the right to vote, we know that the trajectory of American history has always been to greater, not less, freedom for our citizens. But Making Democracy Work has never been easy, nor is it ever finished. And as such, the fight Catt charged the League of Women Voters with at our founding continues today. We know that ultimately the movement for women's right to vote was successful and we are the living legacy of that success.

Since 1920, the League of Women Voters has reinvented itself many times. From the beginning, the League has sought to strengthen our democracy by empowering voters to engage with their government and to tackle the most important issues in our communities, states and nation. Inspired by the relentless fight for equality over the decades, the League is building on our legacy and stands ready to continue our work against discrimination and for voting rights.

What was true 100 years ago remains true now. The fight for universal suffrage continues today, so as we mark the 95th anniversary of the 19th Amendment, we are reminded how valuable our right to vote remains. Join us in celebrating 95 years of women voting and the 19th Amendment by telling your members of Congress to protect our right to vote by restoring the Voting Rights Act. 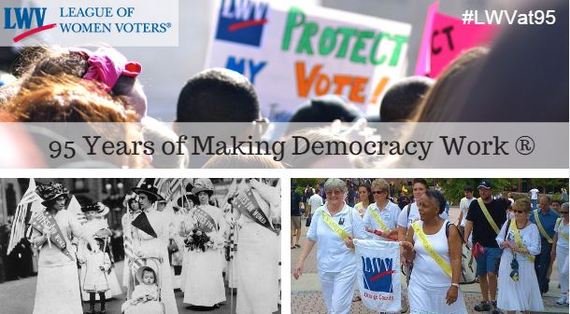 President, League of Women Voters of the United States