Beer behemoths are on an advertising bender as craft brewers slurp up drinkers.

Spending on alcohol ads has shot up 400 percent over the last four decades, according to a new study from the University of Texas at Austin. Yet the amount of booze Americans are buying has remained relatively the same. Brands are fighting harder to keep drinkers, but they're not convincing them to drink more.

“It’s gotten harder and harder to reach consumers,” Gary B. Wilcox, the lead author of the study and a professor at the college’s advertising school, told The Huffington Post on Friday. “The size of the market isn’t expanding, so the intensity for market share has greatly increased over the last 40 years.”

The following chart shows how the average American's alcohol consumption has changed over the years: 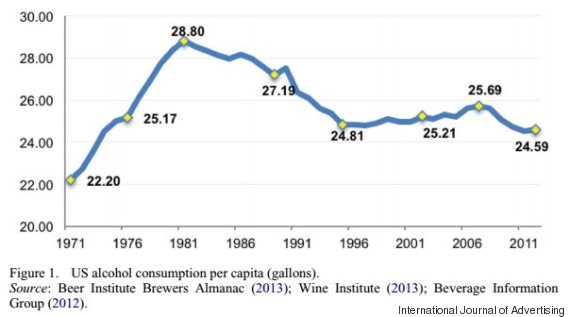 That starts to look pretty pitiful when you consider the recent intensity of the industry's ad spending. Alcohol purveyors have been buying up ad space on any available medium since 1971, the year the Federal Trade Commission lifted a ban on advertising booze via broadcast outlets. As more and more money has been sunk into ads, the amount of alcohol consumed hasn't changed all that much.

Here's an inflation-adjusted look at how the advertising for alcohol has skyrocketed: 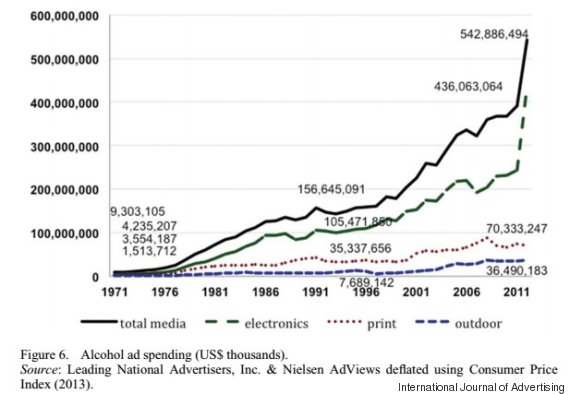 Recently, global beer giants Anheuser-Busch InBev, SABMiller and Heineken have ramped up spending in the face of steeper competition from small-batch brewers, whose business depends more on concocting interesting flavors and less on marketing to a large audience.

“Consumers are switching from quantity to quality,” Nick Petrillo, alcohol industry analyst at the research firm IBISWorld, told HuffPost. “Whereas the very nature of these macrobrewers is to sell palatable, mild beer that generally everyone can agree with and enjoy and just sell as much as possible.”

According to the study, advertising sales for beer increased to 64 percent of the overall alcohol market in 2012, up from 47 percent in 1971.

But beer consumption has remained pretty flat, as demonstrated in the following chart: 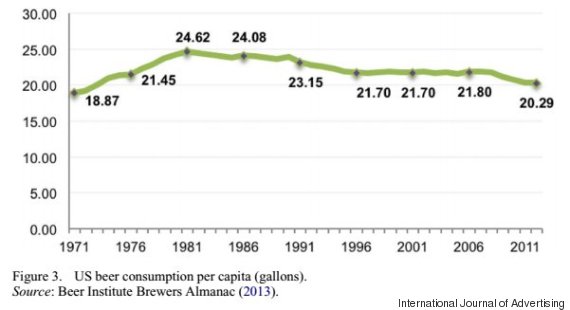 In response to weak sales, big-label brewers have gobbled up microbreweries in a series of acquisitions. And in cases where smaller competitors can't be bought out, larger companies have opted to bash them instead.

Asked whether, in its entire history, Elysian Brewing has ever spent money on advertising the ale, the brewery told HuffPost, “No, definitely not.”