News came out last week that Bob Stiller, founder of Green Mountain Coffee Roasters (now Keurig Green Mountain) and still recognized as Chairman Emeritus, made a $10 million dollar grant to Fair Trade USA, a fair trade labeling organization on whose board Stiller sits. This is a challenge grant requiring $10 million additional dollars to be raised, bringing the total investment in Fair Trade USA (FTUSA) to $20 million.

In theory, this news should have the fair trade movement jumping up and down. Instead, many of us are wondering if this may be the final blow to the meaningful fair trade that we have advocated for so long.

Stiller founded a company with a mixed record. Yes, they are the largest single purchaser of fair trade certified coffee, but fair trade coffee makes up less than a third of their offerings. As their recent name change indicates, they are also the coffee that ushered in the single use K-Cups which wreak environmental havoc and ensure that farmers receive an even smaller percentage of the price consumers pay, with most money going to pay for marketing and packaging. Green Mountain is also a member of the Grocery Manufacturers Association, an organization that lobbies for free trade agreements such as the Trans-Pacific Partnership (TPP). In the wake of NAFTA, 2 million corn farmers in Mexico were forced off their land. TPP is expected to have similar outcomes over greater swaths of the earth. Even $10 million dollars is not enough to buy farmers out of bad trade policy. Stiller's resources and influence could better be spent invested in organizations advocating for a trade architecture that supports small-scale farmers rather than squashes them.

Fair Trade USA's track record is not much better. After breaking away from the international Fairtrade Labeling Organization (now Fairtrade International), FTUSA announced its rogue Fair Trade for All initiative opening up the model to certify independent smallholders and large-scale "estates" (aka plantations) as fair trade. This was done despite protests from small-scale producer groups within the fair trade system as well as significant opposition from committed fair trade coffee roasters and other committed fair trade brands, advocacy organizations such as my own, and consumers.

One of the three areas of investment for this proposed grant is "strengthening the certification model." This is perhaps the most concerning aspect of the grant. Small-scale coffee farmers protested FTUSA's new model for certification precisely because it goes against the very essence of fair trade and the reason fair trade was developed in the first place. That is, it allows single-owner plantation coffee to be labeled as fair trade, directly competing against small-scale growers who have put democratic organization and building long-term relationships at the core of their model as they struggle to gain market access in a market that favors the bigger and the less democratic. These small-scale farmers understand they can be outcompeted, perhaps put out of business, in the very fair trade model that they helped create. Strengthening the FTUSA certification model could very well mean the end of small-scale farmer fair trade. 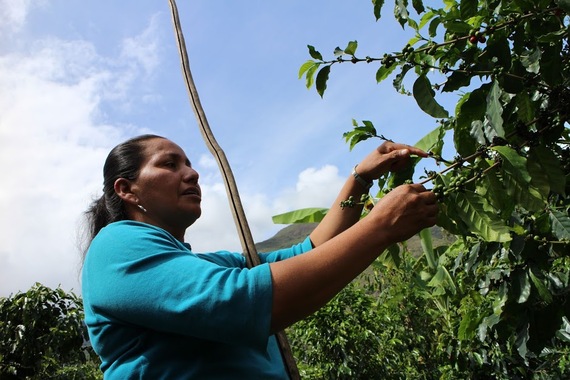 Julia, a small-scale coffee farmer in Peru, shows her farm and explains the dangers of allowing plantations into the fair trade certification model.

Another priority of the grant is "deepening consumer engagement" which is code for marketing this model to unsuspecting consumers. Ones who still likely believe they are supporting small-scale farmers.

Our call to potential funders of FTUSA is let's not unlock this $10 million dollar "investment." Let's instead direct funding to organizations like the Small Producer Symbol whose very mission is to promote small-scale farmer fair trade because labelers like FTUSA failed them. Or let's invest in groups fighting against more NAFTAs and promoting fair trade policies that will allow small-scale farmers to stay on their land, producing food for both their community and northern consumers.