Last week, the Prime Minister of Portugal announced the end of the third intervention of the International Monetary Fund (IMF) in the country since 1978. Roughly every decade, Portugal "hands over" its sovereignty to foreign authorities in order to rescue its public finances and economy from complete collapse. The exit from this third program, similar to Ireland's exit last year from its IMF program without any additional off-markets financial assistance, was celebrated by Portuguese political forces across the board, from left to right, including the president, ministers and parliamentarians alike.

But how timely, informed and reasonable are these celebrations from a country's sustainability stand point? After all, in the past, the first intervention was followed by the second in 1983, and after the second came the third in 2011, and after the third...

A recent joint declaration by the Troika - IMF, the European Central Bank, and the European Commission - made no mistake; the challenges Portugal faces in building an economy both flexible and resilient will continue. The declaration singled out persistent problems in market structure and functioning, high unemployment rate and debt levels.

In 1808, the British General Arthur Colley Wellesley held a modest reputation in England. But aside from some notable performances in India, he was not the ideal rallying figure in Britain to face the vanity of Napoleon Bonaparte on the Iberian Peninsula. However, in the Portuguese little town Roliça, Wellesley won a battle that forever changed his renown. Critical for victory was Wellesley's recognition that a good logistical base is necessary for a well-motivated army. "If I had rice and bullocks, I had men," he said. "And if I had men, I knew I could beat the enemy."

In 1962, John Kennedy's adviser, Arthur Okun, suggested that Wellesley's principle be applied to economics. In practical terms, an economy with a glut of unemployed people will suffer recession. Without a well-motivated army, there can be no victory. Wellesley's principle applies well to Portugal: there's been no sign of a long-standing victory partly because of the sky-rocketing structural unemployment rate (see Figure 1). 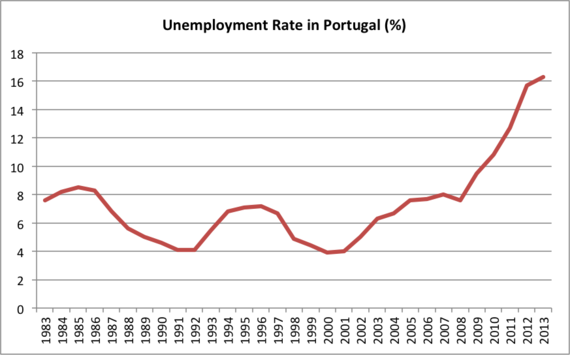 These unemployment rates do not even account for the more than 2 percent of the entire population who emigrated in the combined years of 2011 and 2012. Over two hundred thousand citizens left the country in those years alone, the highest number ever recorded in national statistics. The lack of a coordinated national strategy to address this problem has been explained in another recent post. Don't blame the Troika for Portugal's unemployment. Those levels were on the rise in 1999 and accelerated in 2009 - a full two years before the Troika appeared in Lisbon.

The very fragile situation in 2014 at the end of the third intervention is not much different from the situation Portugal faced in 1979 when exited its first IMF program. After the first program, two more followed. What can post-IMF past economic trajectories tell us about what the Portuguese can expect from the outcomes of their politico-economic system post-third intervention? The answer is: quite a lot.

Considering 1978, 1983 and 2011 as initiation years for each IMF program, the evolution of national production and income clearly doesn't behave similarly across IMF interventions (see Figure 2). 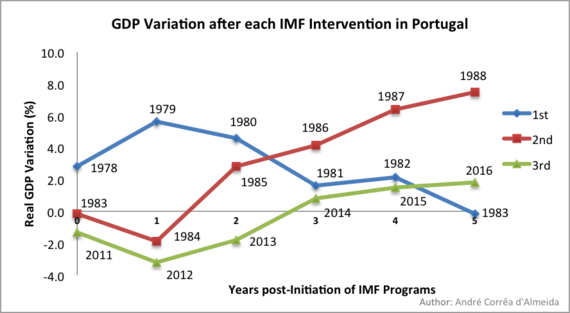 The first intervention recorded five subsequent years of economic growth. The second intervention reached a positive growth rate after only two years. The third intervention will take a longer period to bring the Portuguese economy back to positive levels. There is clearly something fundamentally and structurally wrong with a politico-economic system that relinquishes its sovereignty to foreign authorities every 10 years. Whatever it's wrong, it's getting worse!

At the core of the illusions regarding the sustainability of post-IMF, macroeconomic, imported short-term stabilization programs is this: the most-needed structural changes won't happen unless institutional innovation comes from within the country's own system. 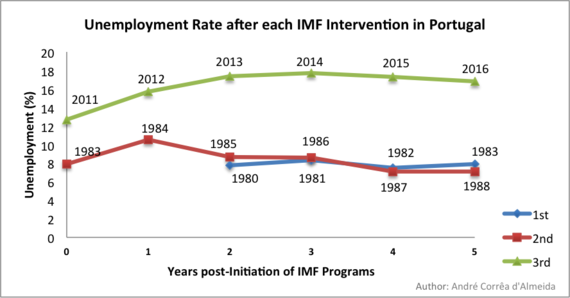 But Figures 2 and 3 also uncover two very different trends. While Figure 2 suggests that short-term adjustments can fix national public finances and the economy by bringing them to satisfactory levels in a relatively short amount of time, Figure 3 frustrates such illusions by revealing a much more rigid, inflexible and complex set of politico-economic truths--exactly what General Wellesley and the Troika's declaration teach us. Politics in Portugal is utterly biased towards short-term results and the media offers political actors a perfect stage for their smoke-and-mirrors and slights-of-hand. If past behavior is the best predictor of future behavior, then without further structural and institutional changes it may well be that the IMF's departure last week is really just Portugal's way of gearing up for a fourth external intervention.

To rephrase General Wellesley's words: "If I had men, I knew I could beat the enemy."