Last Monday, November 12th, I was honored to compete in the 46th Pillsbury Bake-Off® contest (PBO), where I was named the winner of the Jif® (peanut butter) Innovation Award and $5000 for my Thai Shrimp Pizza. This was an extraordinary experience and the dream of a life time come true so I am more than grateful to Pillsbury, Jif and all the sponsors of this grandmother of all cooking contests. 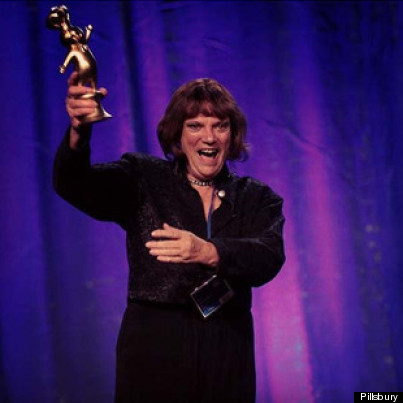 At the urgings of those few that know my circumstances, it is with great embarrassment and humility that I admit that I bought the ingredients for my original prize-winning recipe and testings using my SNAP (food stamp) benefits.

One of those people urging me to put a face on those in need and to urge Congress to not cut $40 Billion from SNAP in the 2013 Farm Bill, as is being proposed by the House GOP leadership, is a reporter, herself in need of food assistance. Each of the almost 48 million people needing food assistance, has a very real, gut-wrenching, yet sometimes positive story. The Denver Post Food Editor Kristen Browning-Blas documented some of what I/we have accomplished in the eight months since starting Plant a Row to End Hunger, the SAME day that I learned I was a finalist in the PBO.

I am not a "loser" as many of our representatives in Congress have labeled those needing food assistance, including my own CD 3 Representative Scott Tipton, (who I have previously addressed in a Huffington Post blog). Not one of the people that my/our program serves, is a "loser" because they can't afford food.

Because of a preexisting condition, I am also one of the 30 million uninsured who is looking forward to January 1st, when ObamaCare goes into effect and I will finally be able to have surgery to replace the veins in my left leg and ankle that was infected and painful while I competed for the $1 million grand prize in the Pillsbury Bake-Off, and which has prevented me from employment that requires many hours on my feet. Should there be any question about my incessant quest to achieve an income, just Google my name and over 10 pages of things I've done and accomplished in the past six years of no regular paychecks will appear. (Including reports about my previous activism by Huffington Post reporter Arthur Delaney and KUSA 9News Denver, and my current hunger-fighting activism on KDNK public radio.) 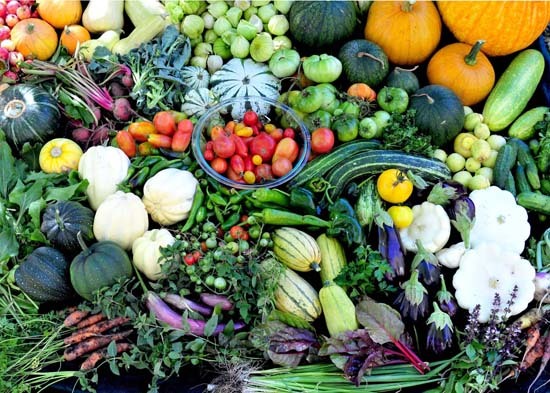 I guarantee you, Congress, there are very few people avoiding finding work so that they can "take advantage" of the average $1.40 per meal offered in SNAP benefits!

I met other PBO competitors that were unemployed and/or so were their spouses. There are several unreported stories of normal, every-day Americans trying their best at every opportunity that arises, within the ranks of the 100 cooks that achieved the honor of competing. I am not unique. Though I am so grateful to be one of seven winners of the PBO, I have found myself occasionally silently lamenting the lost opportunity of not appearing on The Queen Latifah Show, (as the $1 million winner Glori Spriggs did), as I wanted to urge Queen Latifah to use her celebrity status and convince her celebrity friends to speak out about how cruel and harmful any further cuts to SNAP truly are and to urge our members of Congress to protect and enhance SNAP and to do the following four things BEFORE voting on ANY cuts:

1. Visit a food pantry, and hear the stories and see the faces of the people that need food, BEFORE this vote is taken.

2. Take the SNAP Challenge and see what it's like to live on the average $36 per week in benefits that recipients exist on.

3. Watch the exceptional recent documentary produced by Top Chef Tom Colicchio and filmed by his wife Lori Siverbush about hunger in America, A Place at the Table.

4. Check out food insecurity, child food insecurity and poverty rates as well as how much it costs for an average meal in every county that you represent, by clicking on those counties and the tabs above in the Feeding America Map the Meal Gap map of every county in America.

I would urge you also, to absorb the FACTS:

Food pantries are OVERWHELMED because of three recent impacts, aside from the non-recovery from the worst recession in history:

1. The Sequester -- hit seniors and children particularly hard between drastic cuts to Meals on Wheels and Head Start. As well, many people lost jobs and/or had their hours cut, forced days off, etc. which has driven them to food pantries.

2. The 16-day government shutdown forced 800,000 government employees, many living paycheck to paycheck, into unwanted unemployment and the use of food pantries. Additionally, 90 percent of all commodities and food delivered to food pantries, is transported through the USDA. With those shipping docks inoperable for 16 days, we saw a LOT of fresh food waste as well as many deliveries for Thanksgiving will NOT be making it to the food pantries in time for distribution.

3. On November 1, ALL SNAP households lost five percent of their benefits after a temporary raise in benefits through the ARA (stimulus during Recession), expired. This was a $5 BILLION CUT to SNAP. All U.S. charities and food pantries combined raise and distribute only $5 Billion in food per year -- equaling the amount of the Nov. 1 cuts which essentially translated to wiping out an entire year of those hunger relief efforts. 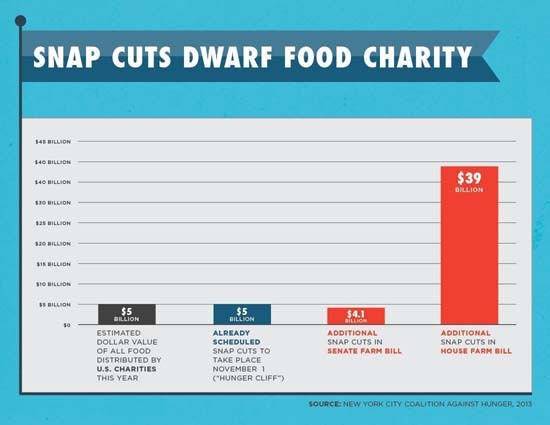 Two years ago, SNAP saw a $4.2 Billion CUT when Congress used that money to pay for the Child Nutrition Re-authorization (raise in school lunch $$). That's like robbing Peter of his dinner to pay for his son Paul's school lunch!

According to U.S.D.A. Secretary Tom Vilsack in an interview I saw him in last week, 92 percent of SNAP households have a WORKING member in the household! 87 percent of SNAP households have children, seniors or a disabled family member in them. 900,000 veterans and their families need SNAP benefits to provide their food needs and 47 percent of households are the "working poor." Contrary to popular belief, the SNAP program has been found to be THE most efficient program run by the government with only one percent fraud or mis-payments. SNAP is also the number one best economic stimulus according the Moody's Analytics Chief Economist Mark Zandi, with a $1.79 return on every dollar in benefits extended. Every dollar goes right back into the economy. Whereas, Mr. Zandi found that extending tax breaks to the wealthy, only returns .29 on every dollar in tax breaks extended. Our children can not learn nor have happy childhoods when one in four children in classrooms are hungry. Our seniors, veterans, disabled, "working poor," under and unemployed need food and a hand up to get their lives back.

PLEASE contact your rep in Congress TODAY and urge them to PROTECT and ENHANCE SNAP. Also, please volunteer or donate to your nearest food pantry and practice what Mother Theresa said, "If you can't feed one hundred people, feed just one."