So I have this baby book for my son that I use to record his milestones, and it is boring. It is so, so boring. Half the time I don't even remember to write things down when they happen because I am so wholly uninterested in recording things for this stupid book. "Today he rolled from back to front," is not a story I would tell someone over coffee unless I was hoping they would fall into a sleep deep enough for me to steal their iPhone and draw a penis on their forehead in magic marker.

Why are we keeping track of these yawn-inducing milestones? Unless your daughter's first tooth is a mastodon-style tusk, the woman in your carpool isn't going to care about it. Unless your son's first step is followed by 20 minutes of seamless line dancing, it's probably not going to wind up as a viral video with nine million YouTube hits.

But people keep track of a lot of boring things when it concerns their children. The other day a lady in a coffee shop asked me how much my son weighed. I admitted I did not know. The last time I had been able to weigh him was when I had snuck him onto the scale at the veterinarian's office when the receptionist had her back turned. That was a month ago. I do not see the need to know how much he weighs unless you work for UPS and I am asking how much it will cost to ship him overnight to Chicago.*

And here's the thing. I could maybe understand recording your child's boring milestones if there weren't any more interesting ones happening. Because obviously you want to record something. But having a kid is NOT boring. Having a child is nothing if not a roller coaster full of bodily fluids and emotional trauma. So why are we recording the day he tried solid foods and failing to commit to paper the first time we had a panic attack because we almost dropped him?

That being said, I've created a list of 10 magical baby moments that I'm writing into my son's baby book because I think they're important to remember once my child gets older. I wanted to stop at 10, but I'm sure there are others. Feel free to weigh in on any you think I should have added.

A BABY'S BOOK OF WORSTS

1.) THE FIRST TIME YOU TURNED YOUR BACK FOR ONE F*%KING SECOND AND YOUR CHILD ROLLED OFF THE BED OR SOFA OR CHANGING TABLE. 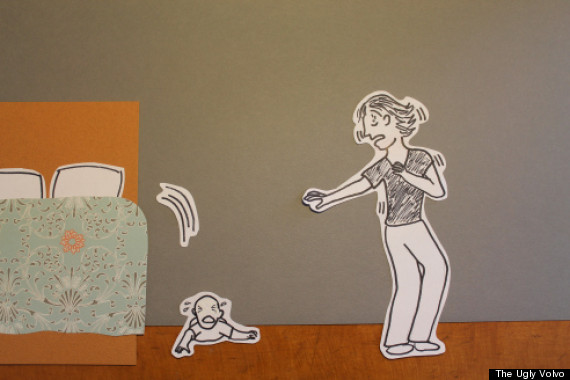 A baby on a bed is like a wallet on a Times Square sidewalk -- there's no way you're going to step away for a few seconds and it's going to be right where you left it. Little known fact: Sir Isaac Newton discovered gravity when he left his kid on the changing table for just one half millisecond, leading to his famous law that a child in motion is likely to stay in motion and a child not in motion is likely to start being in motion the second you aren't looking at that child. And also the whole story about the apple he probably made up so his wife wouldn't freak out when she came home and was like, "HE ROLLED OFF THE WHAT? YOU WERE SUPPOSED TO BE WATCHING HIM!"

2.) THE FIRST TIME YOU TRIED CUTTING YOUR CHILD'S NAILS AND YOU ACCIDENTALLY CLIPPED THE SKIN AND SHE BLED A LITTLE. 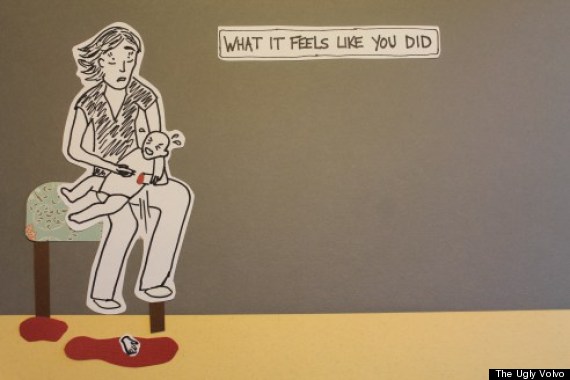 Explain to me how I am supposed to cut fingernails that are four atoms thick.

So hey, do you remember reading The Da Vinci Code about 10 years ago when it was temporarily mandated by law that everyone read The Da Vinci Code? Do you remember that f*%ked-up scene where the monk is whipping himself with a rope until he bleeds to repent for his sins? And the whole time you were like, "How could anyone ever feel so badly about something they did that they would want to inflict that kind of physical pain on themselves?" So when my son was not even a week old, I accidentally cut his skin when I was trying to cut his nails -- and I'm not saying I'm in favor of self-flagellation or religious extremism, I'm just saying I get it.

3.) THE FIRST TIME YOU WERE HOLDING HIM UP IN THE AIR AND HE THREW UP ONTO YOUR FACE. 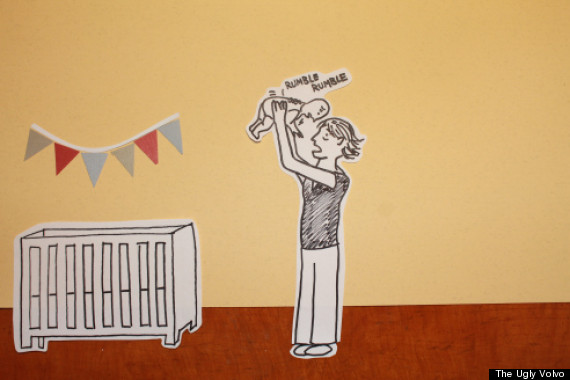 Your little airplane has a special delivery.

If you loved the popular Nickelodeon show "You Can't Do That On Television," you will LOVE holding your baby above your head right after he or she has eaten. This is really a mistake you should only make once.

4.) THE FIRST TIME YOU SAW ANOTHER KID YOUR CHILD'S AGE WHO WAS MORE ADVANCED THAN YOUR CHILD. 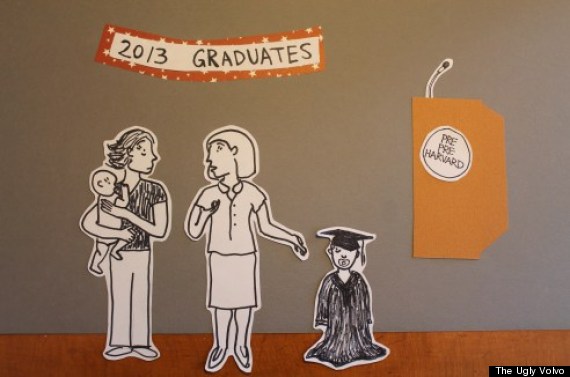 "She could multiply fractions a month after conception."

Judging by the number of allegedly "brilliant" 2-year-olds I've met, I'm amazed the BBC News website hasn't been replaced with a static page that reads, "World's Problems Solved -- Everything Fine Now." Don't beat yourself up if the child next door seems to have a solid grasp of string theory while your child is still actively trying to eat pieces of string. If all these kids at the playground are so brilliant, why are we having this problem in Syria? Why haven't they developed a cure for cancer in their Melissa and Doug research laboratories? The next time someone starts telling me how advanced their child is, I'm going to say, "Oh, thank goodness your 4-month-old is here -- I was worried I'd go all day without meeting anyone who could solve the energy crisis." 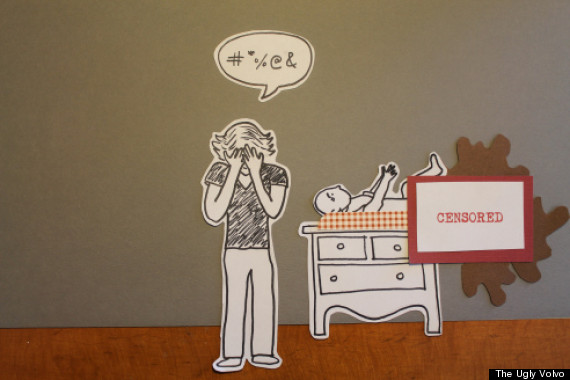 Try to remember why you wanted a baby so badly.

If we could harness the power of our infants' bowel movements, the United States would immediately win the arms race.

The first time something really gross happens, you're going to remember it for the rest of your life, so you may as well write it down for posterity. There are times I've tentatively opened a diaper and based on what I've found have immediately hammered out an apocalypse-themed screenplay to mail to Bruce Willis. I don't want to brag, but one time after a stomach illness my son produced the fecal equivalent of the Game of Thrones "Red Wedding."

6.) THE FIRST TIME SOMEONE YOU DIDN'T KNOW GAVE YOU UNSOLICITED ADVICE ON HOW TO RAISE YOUR KID. 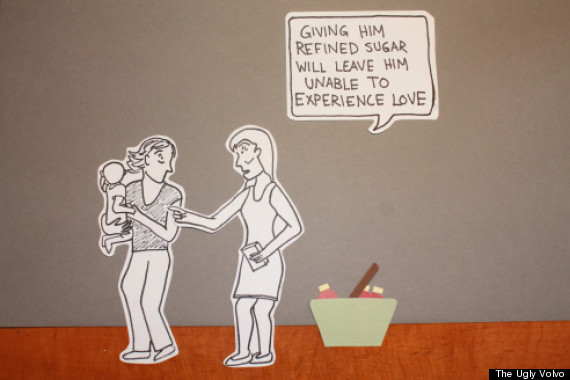 Clearly if anyone knows how to raise your child, it's this total f*%king stranger.

The best way to deal with people who give you random, unsolicited baby advice is to give them advice you think is useful in exchange. Oh, you think I should put a blanket over my son's legs? I think you should watch Wreck-It Ralph and get a better, more flattering haircut. You think maybe I should hold him differently, lady buying only Vitamin Water and gluten-free pancake mix? I think you should use less eyeliner and donate money to Doctors Without Borders and not go shopping in heels and a tennis dress.

7.) THE FIRST TIME YOUR CHILD HAD A MELTDOWN IN A PUBLIC PLACE. 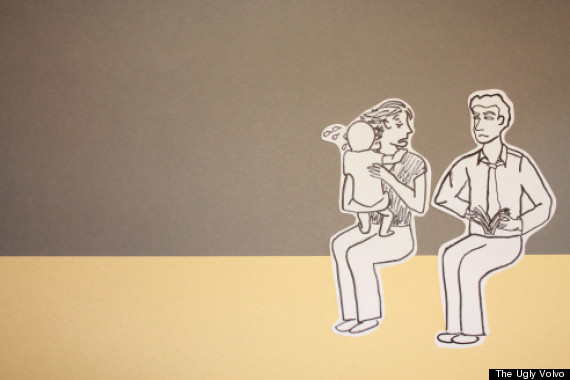 I would have set this picture in a more crowded location but I didn't have time to draw 40 people during my kid's two-hour nap.

If you insist, "No, I swear, I'm not lying!" congratulations on STILL LYING.

8.) THE FIRST TIME YOU FORGOT TO LOCK THE WHEELS ON YOUR STROLLER. 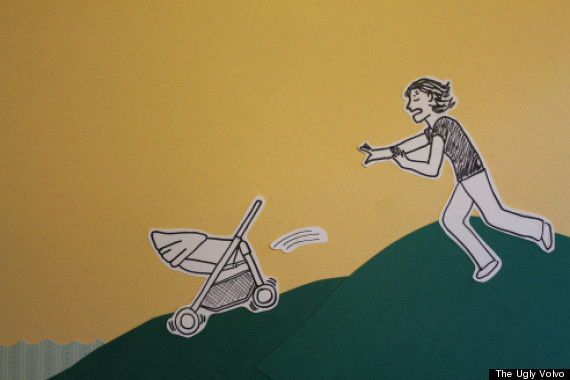 If there were an Olympic footrace where the only people competing were Carl Lewis, Usain Bolt and me trying to catch a stroller that was rolling down a hill, I would have landed a Nike endorsement deal before I even had time to hike up my high-waisted, lycra running pants. I do not understand why car manufacturers make such a big deal of their cars going zero to 60 in only a few seconds when clearly stroller manufacturers have had that technology for decades. Chasing a stroller down a hill is one of the most anxiety-ridden things I've ever done, and thank God I didn't go in for X-rays directly afterward because the physician would have said, "There are some complications, as we're trying to figure out what your heart is doing in your throat."

9.) THE FIRST TIME HE REPEATED SOMETHING YOU DIDN'T WANT HIM TO REPEAT. 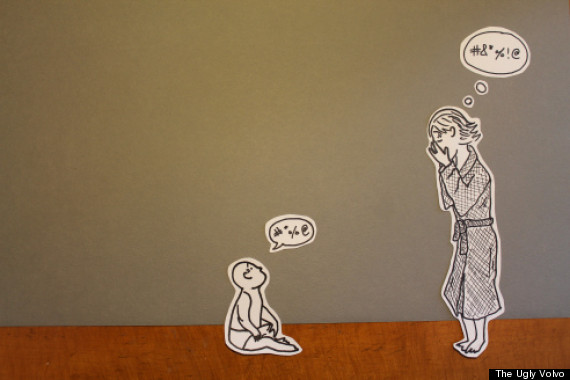 If you really didn't want your child to learn any curse words, maybe his first movie experience shouldn't have been watching Joe Pesci in Casino.

10.) THE FIRST TIME YOU COULDN'T REMEMBER YOUR CHILD'S BIRTH IN ENOUGH DETAIL AND WERE WILLING TO CONSIDER HAVING A SECOND CHILD. 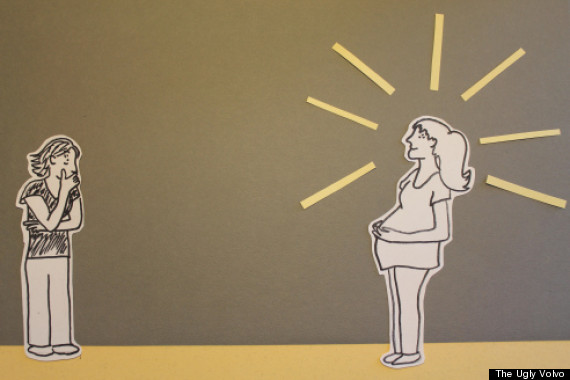 It seems so magical, but why do I feel like there's something I'm forgetting?

Oh, good old pregnancy and childbirth. Was it really that terrible? I mean it hurt, obviously, but it couldn't have hurt that much, right? It definitely didn't feel like you were being hit by a train during a 30-hour ordeal where you wished yourself dead no fewer than nine times. You definitely didn't cry your way through the last three hours of contractions, wondering if this was what it felt like to die on a Civil War battlefield. You certainly didn't spend the next two weeks crying out in pain every time you had to use the restroom, an experience followed by months of sleep deprivation and the loss of all your free time and disposable income. Was all of it really that bad?

It wasn't, was it? Lots of people have a second kid.

(I haven't hit this milestone, but I'm terrified that I will eventually.)

*It would cost approximately $150 to ship my child overnight to Chicago.

This post originally appeared on Raquel's blog, The Ugly Volvo.

Cute Kid Notes
More:
Having A Babyparenting humorParentsparents-babiesparents-moms
Newsletter Sign Up
Raise the kind of person you'd like to know
Subscribe to our parenting newsletter.
Successfully Subscribed!
Realness delivered to your inbox