Traditional banking is about selling money you have. Finance, unlike traditional banking, is about the money that is not there. Thus finance is getting from whatever amount of money you have (10 thousand or ten billion) to its doubling, tripling. This means that pumping taxpayers money into the financial system is giving finance more grist for its mill: leveraging.

We have had five bailouts since the 1980s, the decade when the new financial phase took off. Every time taxpayers money was used to pump liquidity into the financial system, finance used it to leverage. That is what finance does. We can't hold it against finance. But we can chose a non-financial solution to the crisis.

It is almost irrational to give finance the instruments to do more of what has brought us to the brink. The prior bailouts each contributed one more element to the unsustainable leveraging we have now reached. The high level of financializing of our economy is reflected in the relation of financial assets (which is to say, debt) to GDP. It has now reached 450% to GDP, according to the recently released McKinley report. Futher, the complexity of this inverted financial pyramid is almost impenetrable. An example is the incapacity of the Treasury to estimate the cost of rescuing AIG -- first estimated at $40 billion by its management, it wound up at $121 billion. Unwinding the credit insurance on Lehman cost far more than the Treasury had estimated, reaching $360 billion.

Yet another indication of this irrationality comes from the participation of the Federal Reserve in this financial "solution": the Fed is now leveraged at a ratio of 50 to 1, a historic high. It looks like a hedge fund, and a very speculative one at that. This puts the federal guarantee system at risk -- for instance, it undermines the capacity of the government to guarantee people's bank deposits.

Re-routing the remaining 350 billion of the bailout money approved by Congress becomes urgent. As of now the first half has been used to feed hungry financial mouths: one third of payments made to the beneficiary banks wend to pay dividends to shareholders; somewhat less went to pay executive bonuses, and the rest went to AIG. So much for the hope that injecting $350 billion into the financial system would get them to make loans to households and small firms.

Now that these basics have been taken care of, the beneficiary banks are ready to do more of what got us here: use the remaining US$ 350 billion to do some leveraging. The IMF recently produced some interesting data showing the extent to which financial leveraging has caused the greater acuteness of the current crisis compared with the other 3 major crises since the 1980s. 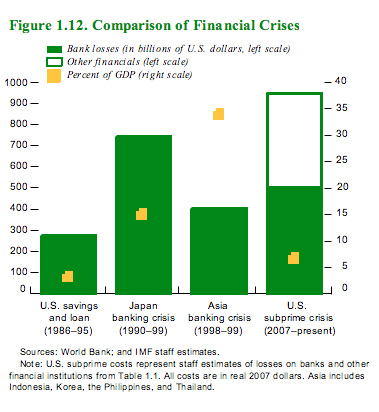 This shows that financial leveraging added another whopping 20% to the underlying banking crisis, thereby bringing the current financial crisis up to an equivalent of 40% of global GDP, compared to earlier crises, which rarely went beyond 20%.)

The IMF data also show the extent to which Asia is in a very different position than the US and Europe. Its emergent crisis is economic rather than financial. The stock markets declines are to be distinguished from the leveraging that has fed our crisis -- the outstanding US$ 55 trillion credit default swaps for which there is no money. (Not to mention the $640 trillion in outstanding derivatives). Stock market declines indicate the shrinking resources available to meet all these outstanding amounts. 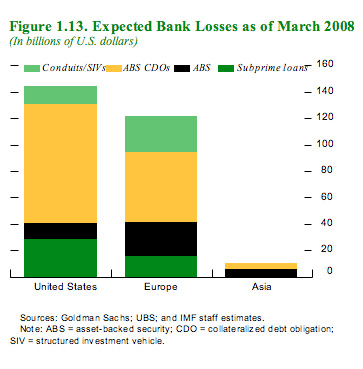 What would happen if the solution to the financial crisis would emphasize growing the economy -- making sure that a wide and diverse away of (especially) small -- and medium-sized firms are put into fast-track activity. This would raise the demand for workers, especially since a large share of small firms are labor-intensive and small to medium firms account for the largest share of employment in most economies. This would in turn raise household demand which would feed back into all kinds of economic sectors. And so on...

So what would be the mechanisms, the conduits, for transferring tax payers money into small and medium-sized firms that could bring about economic growth, rather than merely being a transfer of money. This will vary across national economies. But let me suggest that in most economies, doing infrastructural work is not a bad starting point. And I am not thinking of building huge dams and major new bridges. That is mostly work that only a few large global engineering firms are able to do. There is so much more people-oriented infrastructural work that needs to be done: building and/or repairing the basic infrastructure of large stretches of cities and towns, cleaning up toxic fields, expanding public transport systems, just to mention a few.

Once a government has decided to put billions into an economy as an emergence measure, it can begin to work on such needs, needs which cannot easily be met through market mechanisms. As these projects get under way, they activate market mechanisms directly increases in demand for inputs from other firms, increases in labor demand and hence in consumer demand, which in turn further feeds demand from firms for more inputs and more workers. This is a very indirect process for growing an economy. Indeed, quite a few more financial firms would have gone down, and credit would be tighter for a while if the government had decided to put that vast amount of money into the rebuilding of infrastructure, from small to large-scale labor intensive projects. But in the long run, we would be in the business of economic growth rather than financial leveraging.

The US government has resisted putting money into the economy even where it is urgently needed -- such as strengthening the 700 bridges that are known to have a faulty design and are likely to collapse sooner or later, causing potentially large-scale injury and death. These are the bridges that have the same flawed design as the Minneapolis bridge that collapsed. Yet the US government has not addressed this, has not even started. And now it has decided to put $700 billion into the financial system. Imagine the multiplier effects across small and medium enterprises and households of that kind of money input. Instead it has put it into money firms, hoping that these will start lending.

Saskia Sassen is the Robert S. Lynd Professor of Sociology and Member, The Committee on Global Thought, Columbia University. Her recent books are Territory, Authority, Rights: From Medieval to Global Assemblages ( Princeton University Press 2008), and A Sociology of Globalization (Norton 2007).