Recently, the interfaith center at my university invited religious groups to use the lobby's display case to feature their ceremonial items for one month each. For the Bahá'í Campus Association, the project posed a perplexing challenge, because Bahá'ís don't have ceremonial items. We avoid ritual; each Bahá'í individual, each family, each local community, can develop their own traditions to beautify and symbolize the Holy Days. But those traditions should remain flexible and never ossify.

When I was growing up, I loved the Holy Day traditions in my family. For instance, to prepare for the Festival of Ridván (explained below), we would go to department stores after Christmas and choose "day after sale" ornaments. Then, at Ridván, we would hang them up. I have particularly fond memories of Ayyám-i-Há, the intercalary period when we celebrate charity and generosity. We would string bright colored lights up, turning our house into a fairyland, and my mom would help my sister and me to make "animalitos," paper animals stuffed with candy. My parents would host children's parties for these special days and fill our home with joyful youngsters. I'm sure each of those youngsters' families had their own distinctive traditions.

Even the simplest kind of gathering, "devotionals," when people worship together, can have many permutations. I remember being thunderstruck when I experienced a devotional hosted by Pacific Islanders. Coming from my college in Massachusetts, I was used to quiet, tranquil devotionals, but this one reverberated with communal singing and dancing. It's not that one way is better--it's that each community can enrich Bahá'í gatherings using their own ingenuity and cultural influences.

Given that material accouterments matter little to Bahá'í worship, what did we end up putting in that display case? Well, keep reading to see a virtual showcase of some materials many Bahá'ís use in practicing and studying their religion.

For Bahá'ís, the Writings of Bahá'u'lláh, the Báb, and 'Abdu'l-Bahá are considered sacred. These Writings were originally revealed in Persian and Arabic.

Prayer books are often used for devotions. These feature prayers revealed by Bahá'u'lláh, the Báb, and 'Abdu'l-Bahá, organized by compilers according to themes.

Bahá'í sacred Writings can be accessed online through the Bahá'í Reference Library. (I'm an old-school type, so I love having them as books.) 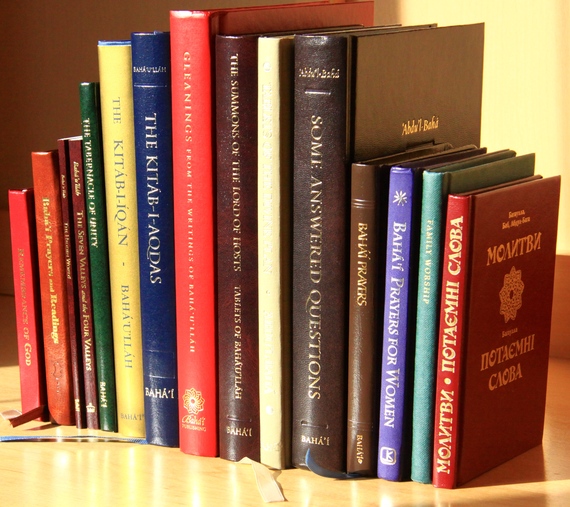 Many Bahá'ís have researched and written books about the history and teachings of their religion. One of the first such books was The Dawn-Breakers, written by the poet and historian Nabíl. This narrative recounts the early years of the Babí and Bahá'í Faiths. The field of Bahá'í scholarship is always yielding new publications; those collected here represent a small sample. Check out Antonia Blumberg's post on Bahá'í books for other titles. 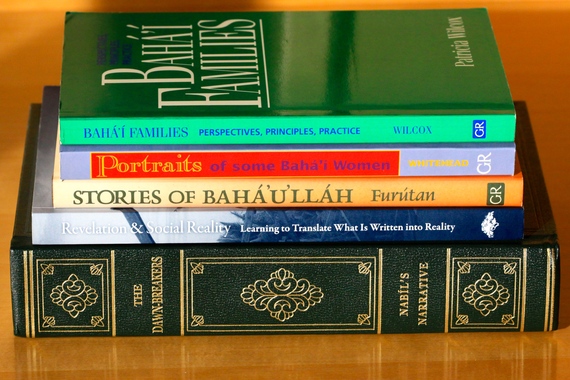 Bahá'ís often greet each other with the phrase "Alláh-u-Abhá," which means "God is Most Glorious." This phrase is also used in daily devotional practice; adult Bahá'ís recite "Alláh-u-Abhá" 95 times. Some use prayer beads to keep count. These beads come in many different styles and sizes--including the unique ladybug style of my own set! 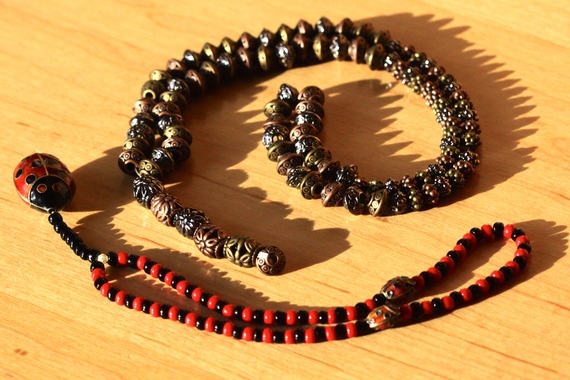 THE GREATEST NAME AND THE RINGSTONE SYMBOL

In the Middle Eastern art of calligraphy, letters and words are made into beautiful shapes. The symbol known as the Greatest Name is a calligraphic rendering of "Yá Bahá'u'l-Abhá." This Arabic phrase translates to "O Thou the Glory of the Most Glorious!" Mishkín Qalam designed the calligraphy in the 1860s. Bahá'ís treat this symbol with great reverence. 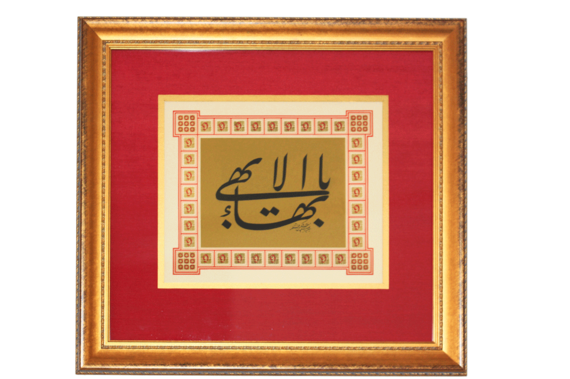 The ringstone symbol is commonly used on jewelry. Bahá'u'lláh's Son, 'Abdu'l-Bahá, designed this symbol. The upper horizontal represents God; the middle horizontal, His Manifestations (messengers); and the lower horizontal, His creation. The vertical line represents the Holy Spirit, which connects all three levels. The stars represent Bahá'u'lláh and the Báb. The nine-pointed star symbol is also used for Bahá'í jewelry, like the necklace on the right. 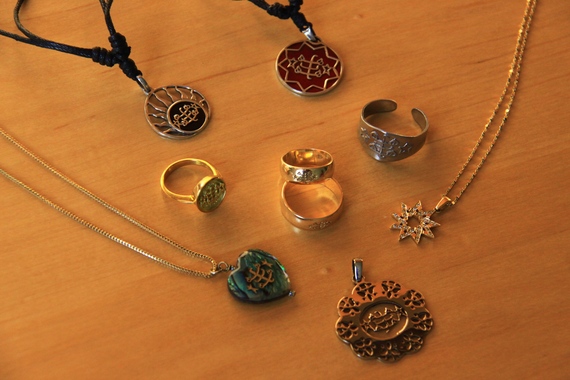 In 1863, Bahá'u'lláh declared His Mission as the Promised One in a garden in Baghdad. He called this garden Ridván (which means paradise), and the festival celebrating His Revelation bears the same name. Because Bahá'u'lláh stayed in this garden for 12 days before departing on the next leg of exile from His homeland of Iran, the festival lasts for 12 days.

During His stay, every morning, the gardeners cut roses and piled them inside Bahá'u'lláh's tent. Many friends visited to bid Him farewell, and He entrusted them with these roses to deliver to His other friends in Baghdad as tokens of His love. Thus, I see them as a symbol of Ridván. 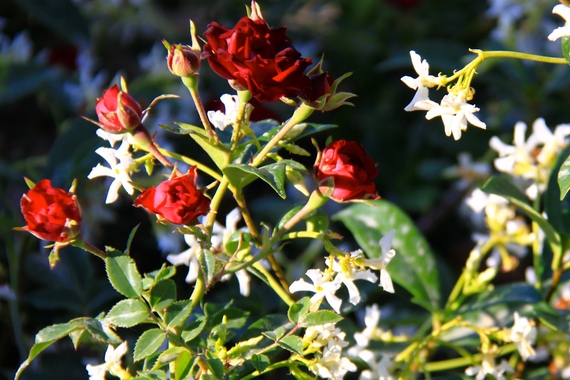