It's the season for bountiful corn harvests. We consume corn in so many forms -- for some, it constitutes a major part of a meal; for others, it provides fuel for an end of summer road trip. That's right, the same starchy grain that nourishes us fuels our cars. 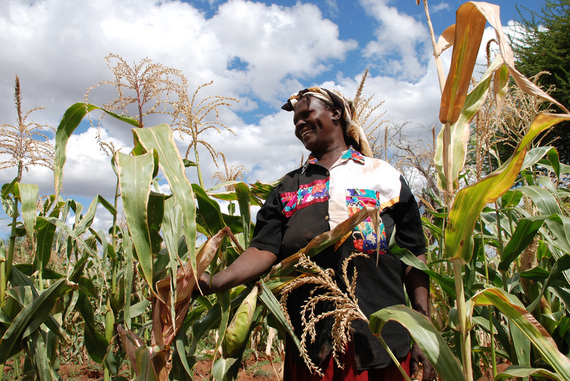 How so? In the U.S., corn is the main ingredient for ethanol, a biofuel. At almost every gas station today, pumping gas means pumping a blend of gasoline and ethanol. As a result, much of the corn grown to feed livestock, a main source of protein for many, has been redirected to produce ethanol. Food and fuel are in competition, even with some complementarity. No clearer is the impact of this rivalry than during the 2007-08 food price crisis that added to the global burden of poverty, hunger, and undernutrition. Biofuel demand was one of the major contributors to high food prices at the time.

There were several motivations for using ethanol as an alternative fuel, particularly high oil prices, national energy security (less reliance on oil imports), as well as environmental and economic concerns about the use of fossil fuels. These concerns led to mandates, subsidies, and incentives that encouraged more ethanol production.

Yet, oil prices have been falling since late last year, and food prices are following the same trend. At the same time, the supply of crude oil in the US is at a 30-year high. And the benefits of biofuels are debatable.

The question is, why are biofuels still increasingly produced?

A major reason is the continued mandate to blend ethanol with gasoline. Another has been to meet the demand for expansion into new markets--in 2014, ethanol exports from the US reached its highest since 2011, while the country still imported from other countries. Across the pond, the EU and Brazil, for example, have similar policies that promote food-based biofuel production and blending. Similarly, countries in Southeast Asia and Africa have shown interest in biofuel production.

With continued demand for biofuels, can small farmers in developing countries benefit? Yes and no. Recent studies show that producing biofuel crops could help reduce food insecurity for smallholder farmers, and enhance economic development. On the other hand, land acquisition for biofuel expansion has caused some farmers to lose their land.

While the benefits present a mixed picture, ethanol production has its own problems. Climate change is affecting corn yields--87 percent of irrigated corn in the US is grown in drought-prone areas. And trade is affected--countries that rely on food imports have felt the pinch of high corn prices as a result of increasing ethanol demand in the US.

How can we strike a balance in achieving food security and nutrition for the poor (who are often rural farmers in developing countries), while supporting innovation for alternative fuels? We could, for one, encourage the production of newer, "second generation" biofuels made from, for example, food waste. More importantly, we must rethink mandates, policies, and incentives that could further instigate the food-fuel competition and threaten the wellbeing of the poor and hungry:

Policies that encourage ethanol production for years to come were commendable efforts to develop and promote alternative fuels, but they created a mismatch in incentives--ethanol production has reached record highs, yet the concerns that drove its production, such as greenhouse gas emissions from vehicles, have not been met. Adopting a national Low-Carbon Fuel Standard, for example, could reduce pollution rather than promote more ethanol production.

Policies that create uneven playing fields for small farmers to benefit from should also be questioned. For example, the EU's sustainability criteria imposes strict levels of reduced emissions for biofuel production. This makes it difficult for small farmers in Africa to enter the market, and potentially improve their food security. We need more evidence-based research to better understand the implications of such policies on rural incomes in developing countries, not just big, established players.

Biofuels present an important case in the realm of global food security and nutrition--they could worsen the food-fuel competition, or help reduce poverty and hunger for many. We must focus on finding the right balance in farming food for the hungry and fueling our cars.