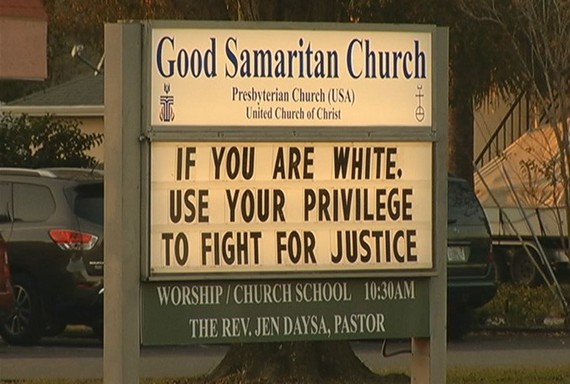 The predominantly white Good Samaritan Church in St. Petersburg, Florida is getting pushback for having posted a message about white privilege on a sign out front.

"IF YOU ARE WHITE, USE YOUR PRIVILEGE TO FIGHT FOR JUSTICE"

One local resident who objected to the sign explained: "I don't think there is such thing as ... white privilege."

This type of reaction did not take the church by surprise. They chose to display this message despite having experienced similar feedback when, over MLK Jr. weekend, they had posted:

"WHITE PRIVILEGE: IF YOU CAN'T SEE IT YOU'VE GOT IT"

Is Good Samaritan Church wasting their time? Not at all. Their idea of a public display about white privilege has enormous potential to awaken white people to their privilege not just in St. Petersburg, but if adopted by houses of worship across the country, nationwide. Here is why.

Religious institutions have a unique moral platform. When they have made good use of this platform, particularly in a coordinated fashion, they have helped achieve great moral successes. Take Darfur. Just a decade ago, the interfaith community's coordinated involvement in the issue of genocide in Western Sudan helped millions of Americans gain awareness about the issue and pressure our government to intervene. The "Save Darfur" banners in front of houses of worship throughout the country were no doubt a key part of the consciousness raising that led individuals to take action, including joining rallies and sending postcards to Congress. Today, houses of worship could make use of their trusted moral voice to encourage white people to notice their white privilege.

A banner campaign would be especially effective on white privilege because, when it comes to white privilege, consciousness raising is an end in and of itself. As I have written about before, white privilege is, among other things, the privilege of obliviousness to race. It makes white people, no matter how well intentioned, extremely susceptible to being blind to our own privilege, and to the privilege of other white people in our midst. White people must be aware of white privilege in order to be able to take action to challenge it in our daily lives-- in the way we raise our children, involve ourselves in their schools, act in our jobs, conduct ourselves in our daily public interactions and give back both financially and in our public service activities. Signs and banners that call attention to the term "white privilege" begin to chip away at a system that is built to disguise it. For this reason, Good Samaritan's first sign that read "White Privilege: If you can't see it you've got it" is particularly effective.

As was the case with Darfur, a national interfaith banner campaign would also signify much deeper involvement. Good Samaritan Church, besides posting signs, is studying race in their mostly white church. Similarly, last summer, when nearly 200 Rabbis from the Reform Jewish Movement joined the NAACP's Journey for Justice, their involvement was certainly symbolically and visually significant. But it was also both the outgrowth of-- and the further impetus behind--- the Reform Movement's "Reflect, Relate, Reform" nationwide campaign, which was announced shortly thereafter. A multi-faith banner effort on white privilege would go a long way in raising awareness about white privilege. Imagine what it would also represent in terms of the commitment of our country's houses of worship to challenging white privilege.

Some might say that these signs shut down conversation and self-reflection rather than invite it. While the people who are most resistant might be the most verbal, there are many others in the community whom such a sign might cause to pursue more conversation and learning. Even for the hard to reach ones, it might be effective. Think of when we get into an argument with someone we respect. Though we may strenuously oppose what the other one is proffering during such an argument, it is nonetheless common for each person to have progressed in seeing and understanding the other's viewpoint after there is time to cool off. House of worship banners that call attention to white privilege would make a lot of white people in the community pause and think. These signs would also send an important message to people of color that faith institutions recognize the problem of racial injustice in our country.