What first strikes a visitor is the banyan tree. It is as sprawling and mighty as the story of Thomas Alva Edison, whose estate it decorates.

The tree came to the inventor's Fort Myers winter home in 1925, a four-foot Ficus benghalenis producing white sap that Edison and his friends Henry Ford and Harvey Firestone hoped to use in making natural rubber.

The banyan was not the answer. But it remained, growing to an acre in diameter, and becoming one of more than 1,000 plants from around the world ornamenting 25 acres dedicated mostly to the man who invented the electric light bulb, the phonograph and the motion picture.

Fifteen historic buildings stand in graceful restorative pose, including the Edisons' home and guest house, a botanic research laboratory, an artesian-fed swimming pool dating to 1911, and Ford's winter home. The combined Edison and Ford estates, museum, laboratory, and shops are open 363 days a year, closed only on Thanksgiving and Christmas Day.

The botanical specimens, many of them labeled for easy identification, offer shade for strollers - and sometimes a touch of the exotic. It is not every day one sees an African sausage tree bearing hot-dog shaped fruit.

Edison, of course, is more extensively associated with his inventions. He held more than 1,000 United States patents, and he submitted patent paperwork for a record 65 consecutive years. Among his lesser known creations: the talking doll, the electric train, alkaline batteries, a fruit preserver, and a stencil pen, the grandfather of today's tattoo stylus.

"Really cool," said Aaron Summers, a visitor from San Diego. "I didn't realize how many patents Edison actually had."

A 15,000-square-foot, air-conditioned museum details the world's busiest inventor's extraordinary career, which stretched from 1869 - when he was 22 years old - virtually to 1931, the year he died.

Among hundreds of items and documents in the museum is Edison's original custom Model T, a gift from Ford. A more personal artifact is the frame Edison built for the phonograph he was devising. Hard of hearing, Edison rigged the phonograph to the frame, which he would bite to feel vibrations and "hear" the music. The wizard's teeth marks are visible in the wood.

The museum's newest exhibit chronicles the camping adventures of Edison, Ford, Firestone and turn-of-the-century naturalist and environmental writer John Burroughs. The "vagabonds," as they referred to themselves, camped throughout Florida and the United States.

Also on display is "Edison After 40," an exhibit on loan from the Smithsonian Institution. It includes images from Edison's middle and later years. In counterpoint, "The Child Wizard" shows early images of Edison as a youth, as captured in Michael Dooling's award-winning book, Young Thomas Edison.

And not to be missed are the entertainment artifacts: phonographs, movie projectors, nickelodeons and films.

"I learned a lot of new things. So many inventions. I loved the phonographic demonstrations," said Susan Wood, who is from England.

More than 200,000 visitors per year come to the property, where Edison and his family spent winter seasons starting in 1885. For $2,750, the inventor bought the property from the family of Jacob Summerlin, a legendary Florida cowman known as the King of the Crackers.

"This house is a dream . . . and we are living in Fairyland," Edison's wife Mina wrote of the Florida retreat, which was dubbed "Seminole Lodge." At its edge, the broad Caloosahatchee River whispers against a restored limestone-and-coquina seawall.

Edison was perhaps "green" before the word became fashionable. Some of his words on the subject are posted in the museum: "I'd put my money on the sun and solar energy. What a source of power! I hope we don't have to wait until oil and coal run out before we tackle that." Edison wrote that in 1931.

Ford bought property next door to his mentor in 1916. As a youth, the motor company founder worked at an Edison company in Detroit. The budding auto magnate used his spare time tinkering with gas-powered engines. The two entrepreneurs met at a convention in 1896, and Edison encouraged the younger man. The two proved to be kindred spirits. The automaker purchased property next to Edison in 1916, naming it "The Mangoes."

"It was interesting to learn how good of friends they actually were," said Eric Rye, visiting from Sarasota.

Guests had to stay in line, though. The Edisons had seven rules, one in particular noting that discretion was important: "Don't fail to retire to your room for part of each day - so that the family may squabble without embarrassment."

Where: 2350 MacGregor Boulevard, Fort Myers. The Edison and Ford estates are about two hours south of Tampa, 2½ hours from Miami, 3½ hours from Orlando, 5½ hours from Jacksonville, 6 ½ hours from Tallahassee.
Hours: 9 a.m. to 5:30 p.m. daily, except Thanksgiving and Christmas Day
Cost: $20 adults, $11 children 6-12, free for children under 6. Includes orientation, audio tour of Edison and Ford estates, with admission to the laboratory and museum. Other tours are available with varying price structures.
Telephone: 239-334-7419
More information: http://www.edisonfordwinterestates.org/ 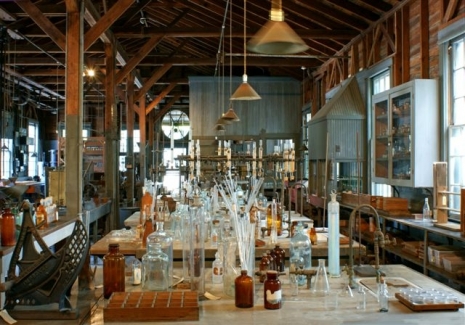