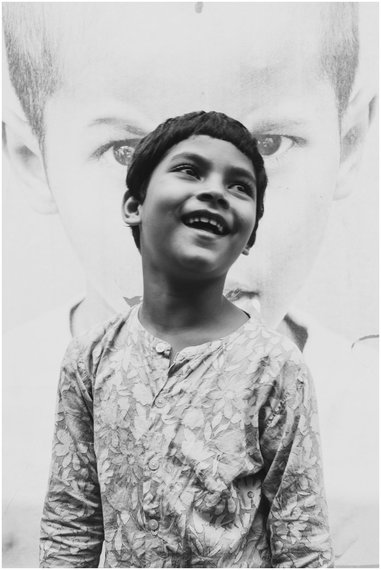 I was nervous when I entered Soma Home, a girls' residence established by New Light India to house and raise the children of Kolkata's red light district. First and foremost, I was there to help. Underneath though, I was scared. My palms were sweaty, my mouth dry, and my heart beating in my throat as I approached the doors. This was due in part to the dizzying circles we'd endured as our driver attempted to find the place. Despite his best efforts, we were an hour late. And in addition to the stress of being behind schedule there were others concerns: among them, that my language (as an English speaker), or my race (as a black woman), would be an obstacle in a city where the local dialect was Bengali and where -- from what I'd heard -- fair skin is considered the ideal. I was also humbled at the prospect of working with girls from the Kalighat red light district, an area where children are likely targets of human traffickers.

Human trafficking, a destructive and soulless practice which trades humans as commodities for labor and sex, has become pervasive throughout the world and is threatening millions of our children. Helpless, innocent and unsuspecting children. This reality is heartbreaking and altogether maddening. But rather than sit on the sidelines, Beauty For Freedom (BFF), a non-profit organization led by Ford model Monica Watkins and a team of hand-picked artists, has traveled the world to spread love and make a difference. Before India, BFF had already visited places like Haiti, and most recently, Cambodia. Its mission? To offer healing, through art therapy workshops, to those children who are survivors of or at risk of human trafficking. "Our advocacy work is meant to nurture and cultivate their hopes and dreams, giving survivors a voice that comes from an empowered place," Watkins explains. "You cannot quantify the benefits of helping children elaborate creatively on their dreams." 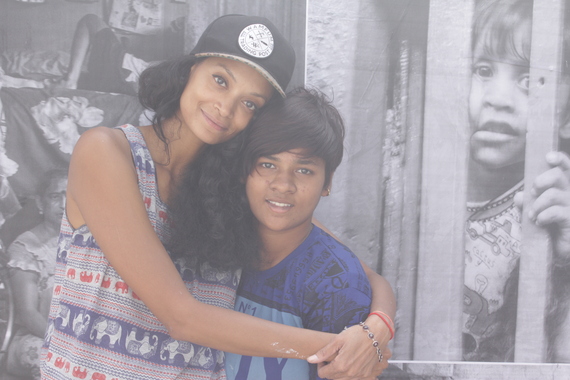 And this was the reason why I came to India. The reason why I took a week off of work, flew to Asia for the first time, and endured an exhausting 48-hours of travel. I was one of BFF's hand-picked artists. And this was a once-in-a-lifetime opportunity to give back. But in addition to my teaching materials, my clothes and a sense of gratitude, I took some fears along for the ride. My mind was filled with doubts: Would I be able to add value? Would my lesson plan be as impactful as I'd hoped it would be? Would they like me? And most basic of all: would they even understand me?

Before I reveal the answers to these questions, I should share a bit about New Light, the organization partnering with BFF in India, created by renowned Indian activist Urmi Basu. Back in 2000, Basu decided to walk through the dark alleyways of the red light district in Mumbai. "It was a terrifying experience for me," she admitted when I interviewed her a few weeks ago. What she saw there changed her forever: unimaginable poverty, filth, and in the midst of it all, unsupervised children left to fend for themselves as their mothers (and in some cases, grandmothers) sold their bodies for food, housing or drugs. Soon after, with limited resources, Basu launched New Light in the heart of Kalighat as a haven and refuge for the children and women in the area, including survivors of human trafficking.

Since then, Basu has seen it all. She and her staff have nurtured these women and girls at their worst moments. "On any given day, a trafficked girl may have twenty to thirty clients," she estimates. "They are rescued with extreme conditions of pelvic inflammatory disease from being repeatedly raped. Teenage girls return with bodies completely scarred from cigarette burns, or hot rods stuck on their thighs, buttocks and breasts." In addition to the horrifying physical evidence of trafficking, there is also psychological turmoil and emotional anguish. "The [emotional] phases are severe," Basu says. "In a [trafficking] survivor we notice phases of euphoria, followed by bouts of deep depression, anger and self-destructive behavior." For this reason, counselors make regular visits to the New Light facilities and some girls are also taken to external therapists.

And New Light isn't only for girls; there is also a boys' home. According to Basu, boys are in need of the same protections that girls are: "Young boys are preyed upon exactly the same way. And if they live in the red light district or brothel areas, they are especially vulnerable to trafficking, prostitution or organ harvesting." Boys are also being trafficked for sports such as camel riding in the Middle East. "Trafficked boys are strapped to the underbelly of a camel," Basu says. "When the child screams and [flails] his arms, it makes the camel run faster." 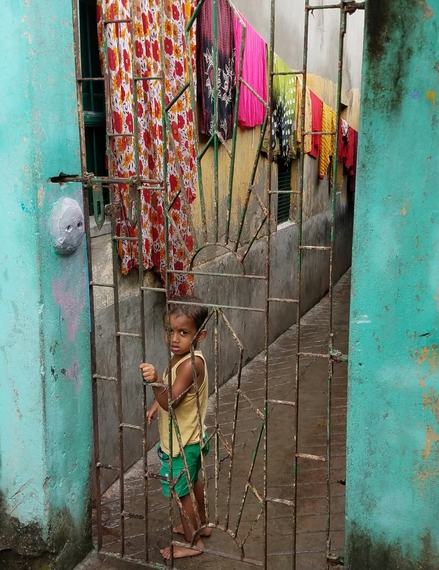 My interview with Basu, on a particularly cold Sunday evening in New York, was heartbreaking in many ways. None more so than when she told me that many of the girls who I had met during my visit to Soma Home, were children who had been trafficked. It was devastating news considering that I met some true kindred spirits that afternoon in Kolkata when, nervous as can be, I walked into a room of 10 bright-eyed, inquisitive girls.

The girls spoke English (in addition to their native Bengali) and ranged in age from 16 to the youngest who was 11. We spoke excitedly about success, dreams, family and love. I asked how they defined each of those things and together, we established the idea that dreams and visions are unique to each person. With that in mind, they completed their own vision board in my first workshop (using clippings from magazines I had brought), and used the boards in my second workshop to complete a creative writing assignment. I was taken by their familiarity with one another's dreams and their willingness to share whatever they had with each other. I commented on their generosity and they simply smiled: "We are family!" one girl declared.

When I spoke to Basu about the intelligence and generosity of her girls, she was not at all surprised. "That is the beauty in all of this. You will not a find another set of kids more engaged, or more hungry for knowledge. And the way they retain things! Every volunteer that has ever walked through the doors of New Light -- they remember their names." 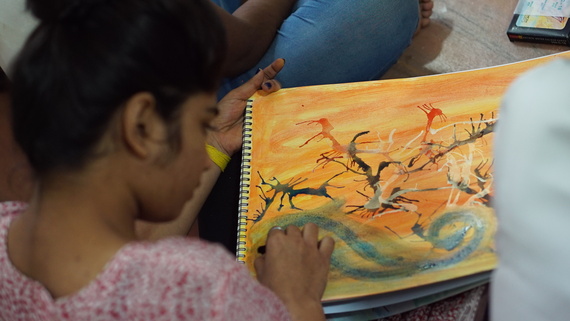 After my last workshop ended, I didn't want to leave. They begged me not to. As a stalling tactic, we played games and sang a few songs together. They taught me a traditional Indian dance. I taught them an interactive call-and-response I had learned when I was their age. As night fell though, we knew the time had come. After a group hug, they formed a circle around me and I embraced each girl again, one by one. Holding their faces in my hands, I spoke a few words of encouragement. "Don't cry," one girl said reassuringly. Another handed me a sheet of paper. On the front was a list of Bengali to English phrases; on the back, in her handwriting were the words: "I love you. We all love you. Miss you."

"I love you all too," I managed. "Remember to hang your vision boards somewhere where you can see them everyday."

"Yes!" they replied eagerly. "And whenever we look at them we will think of you."

The incredible work that New Light is doing is evident in the warmth and loving kindness of the children and girls they have nurtured. But there is much more to be done. New Light's next goal is to build a short-term rescue shelter to provide immediate care to victims coming from a brothel or trafficking situation. Additionally, New Light seeks to establish a 60-bed HIV/AIDS facility, catering to victims of trafficking and sexual abuse. But perhaps the biggest goal of all?" For an organization like ours, the best day will be when we won't need to work anymore," Basu says. "The day when we don't have to worry about the safety of a child whose family is incapable of providing it. I don't know how many lifetimes it is going to take for such a turnaround."

As I descended the stairs of Soma Home on my last night, I could hear the girls calling after me. Once outside, I turned back towards the building. Peering down from the room where I had spent the afternoon, I could see their beautiful faces, their hands waving and blowing kisses. I waved and blew kisses too. In that moment, I wondered how I could have ever had any fears. In spite of all that they had endured in their lives, the girls of Soma Home embraced me with open hearts, welcomed me into their home, and viewed me with eyes of love, generosity and total acceptance. As a result, even today I cannot help but walk a little taller and hold my head a little higher. I gave my best, but the girls gave me much more. I will forever regard my time at Soma Home as one of the most authentic and transformative of my life.