These questions originally appeared on Quora. 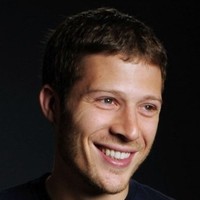 Q: What scene from The Purge: Anarchy did the actors enjoy shooting the most?

A: My favorite scene - and this is for selfish reasons -- is this quick little scene in the apartment where Kiele and I are just talking to each other. We shot the movie pretty chronologically and we had been running around, doing all this crazy stuff for forever, and it was towards the end of the actual shoot, and you know, I got to shoot this movie with my wife, which was really fun. And this scene is the first chance we got to take a breath and just sit and act with each other as opposed to just running around together. So it's kind of a special little moment because you don't get to film with your spouse that often but it was also just a feeling of in the mix of making this crazy movie I get to take a beat and say, "Ah, I'm going to act for a minute, I'm going to do a scene." And I thought it really paged a very different scene. And that's another thing that's so great about James. He and I talked about it a little and were like I feel like the scene was written this way, but this is not totally how it was written, but we presented it to him and he said, "Oh my God, you're totally right, that makes the scene so much better." He was always like that, he was so open to making it feel authentic and it shows in the final product. The director, James DeMonaco, was super collaborative and very empowering of everyone, and I think he collaborated with everyone from props to lights to actors. I think everyone really enjoyed working with him.

Q: What messages is The Purge: Anarchy trying to convey to the audience?

A: I think it is the same as the first film, which is just a look at how inherent violence is to human nature or not. And I actually think this one has a more positive outlook on human nature because it is about people who band together and put themselves at risk for strangers. They have lots of opportunities when they can just go off on their own but they stick together. And yes, there is safety in numbers but they put themselves literally in the line of a bullet at times to protect the unborns. But there is also the very political commentary about a government that would set this up and this great literalization of how the rich get richer and the poor get poorer. It's a society now where the rich can do whatever they want. They hire people to kill, they can forge the security system, they can be part of the purge or not and don't really worry about what is going to happen to them. And the poor literally have to scrap to stay alive. They hide in dumpsters or put up a board across their door and hope that destiny doesn't have someone break their door down. I think it is a very interesting literalization of how surviving in today's society is literal surviving as opposed to a livelihood.

Q: What was the most challenging scene to shoot in The Purge: Anarchy?

A: There was a scene in the movie where rats jump onto Kiele's leg, and so for that they used trained rats, but in this particular scene without the specially trained rats, we were in an alley and there actually were for every take like 10-20 rats creeping up on us. It was disgusting for all of us, and I think there was more intensity in that scene than any other one because we just wanted to get to the end of the scene so that we could run out of the alley, so that we didn't get eaten by the rats! It was like in that movie Willard where it was so gross. I don't remember the exact amount of takes we did, I don't think we did too many, but it was still gross.

Q: How did the lead actors become involved with The Purge: Anarchy?

A: I read the script and very coincidentally had just seen the first film 2 weeks beforehand and I liked it and thought it was really cool. I thought it was shot really well and the look of it was awesome. It definitely showed this claustrophobic kind of home invasion movie, which I think was very conscious but I know a lot of people were like "What! That's not what I thought it was going to be, I thought it was going to be out on the streets and chaos!" Anyway, so I read the second script and it was just like that and it delivered on what everyone expected and it's so perfectly named The Purge: Anarchy. I read the script, and I liked it but I didn't know what the style was going to be until I sat down and talked to director James DeMonaco about it. He gave me his take on it and I got to know him a little bit better and he is truly one of my favorite directors I have ever worked with. And also he's just a great person, him and I were talking for about an hour and the casting director popped in and was like, "We have other stuff to do!" And James responded, "We could talk all day!" And from that very moment, he claims that he was ready to give me the part, but Michael Bay, who's one of the producers of the film was like "no, we have to see him do it; we have to see him on tape." So I went in and made a tape with James and then he said, "Ok, yeah he can have the job." So that's how I got involved and it was fun and when you look at the finished product I think James did a great job and I think it's a much better movie than some people expect it to be. Its definitely a lot more high-concept than it is at face value.