By Elisabeth Egan | Off the Shelf

There's nothing I love more than getting reacquainted with an old friend on the beach. Last summer, while I was vacationing with foodies on Fire Island, I devoured Laurie Colwin's Home Cooking; the year before, I sped through Anne Tyler's Ladder of Years on a weekend trip to Maine. 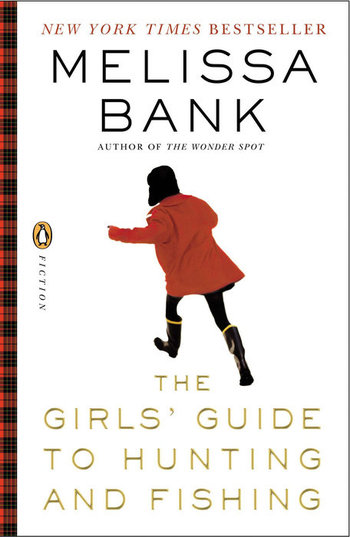 Yesterday, I tossed The Girls' Guide to Hunting and Fishing into my beach bag. I first read Melissa Bank's debut novel when it came out sixteen years ago, and I remembered that some of the action takes place on Long Beach Island, where I am now. (When you love a place that's as maligned and misunderstood as the Jersey Shore, you never forget a generous depiction, or lose your sense of gratitude for its creator.) In the case of The Girls' Guide, I remember being enthralled not just by the setting, but also by Bank's funny and moving story of Jane Rosenal coming of age and finding her way into adulthood. Now that I'm squarely of age myself and fast approaching mid-life, I wondered if I'd love Bank's much-buzzed-about bestseller as much as I did when I was in my twenties.

The answer is a resounding yes.

I reread The Girls' Guide in one long afternoon, two miles south of the Rosenals' fictional beach house in New Jersey. When we meet Jane, she's a disaffected fourteen-year-old, wishing she were on Nantucket instead of bunking in an unfamiliar bedroom with her brother's new girlfriend. From New Jersey, we follow Jane to St. Croix, where she's with her boyfriend, Jamie, visiting his ex-girlfriend and her husband. Jane is in her twenties now, although she's still as candid and vulnerable as she was when she was in her teens. You can't help but root for her when she finally confronts the loathsome ex-girlfriend about trying to use Jamie as a pawn in her own marriage. A few years go by and Jane spends her days working as an editor at a publishing house in New York City and her nights dating the wrong kind of guy. When she falls under the sway of a popular self-help book advocating coyness and indifference while dating, we know this approach will never work for her. She is "out there," in the best possible way. We love her for this and root for her to find what she's looking for on her own terms.

Even though The Girls' Guide is now a teenager itself, Bank's spare prose feels as inventive and fresh as it did when this book was the toast of every book club in the summer of 1999. I'm glad I got reacquainted with Jane, although I wish I'd remembered to put sunblock on the backs of my hands before I lost myself all over again in her story. Now I have the leathery paws to prove what we all know: the pages of a book are the best reflectors of light.

Elisabeth Egan is the author of the debut novel, A Window Opens

10 Reason to Judge a Book by Its Cover