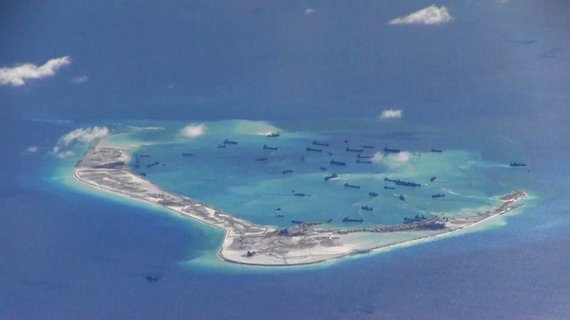 Escalating tensions between the US and China, while ominous, offer a useful reminder that the artificial division of our world into separate nation-states may no longer serve us, and present a compelling reason to consider a better model.

To briefly review some of the alarming recent news: China has been artificially building islands that previously were little more than reefs, placing artillery there, talking about expanding its air-defense zone to cover them, and warning US military planes to leave the area. It's also been building up its navy and reconfiguring its missiles so each one can hold multiple nuclear warheads.

In response, the US has called on China to stop building islands, and our military has proposed a show of strength. Our ally Japan regularly confronts China with fighter planes.

On the economic front, China is investing heavily in the creation of a modernized trade route through Pakistan, buying up African natural resources, and building its presence in Antarctica.

Economically, President Obama has responded by framing his push on Capitol Hill for "fast track" authority to approve the Trans-Pacific Partnership, a multinational trade agreement whose contents we are not allowed to see, as a strategic counter to China's growing power, saying "if we don't write the rules for trade around the world -- guess what -- China will."

We must remember that the US-China relationship is complex. China continues to invest billions here. The two countries reached a breakthrough agreement on climate change last winter, and since then China has already dramatically reduced its carbon emissions.

Still, there's every reason to take a perceived threat from China seriously. It's the world's most populous country, and as its economy has surged to global prominence over the past decade, its industrial capacity, implicitly including war-making capability, have grown as well.

In some respects, this is the first time the US has faced such a situation since the end of World War II. To be sure, we faced off against the Soviet Union throughout the cold war, and our relations with post-Soviet Russia under Putin have been frosty. Yet, while the nuclear threat has darkened this picture for decades, neither the Soviet Union nor Russia has been a top economic or industrial power, despite the recent oil-and-gas wealth of its oligarchs.

So now is an opportune time to ask whether we want to continue the usual geopolitical power game, in which separate countries vie against each other for resources and dominance, threatening everyone's survival, safety, and rights, or whether a new, globally inclusive, democratic governance structure would serve us better.

We in the US may rightly condemn China's recent actions. Yet we should also bear in mind that China's recent muscle-flexing follows inevitably from its economic rise, given the perverse incentives of our fragmented global political structure. With the world divided into separate nation-states, national governments can often keep order within their borders, but they face a constant power struggle beyond, with no legitimate entity truly in charge at the global level. (The UN is simply too weak.) Leaders whose only accountability comes from within their borders can build their power at home by elbowing their neighbors, so they do. This is especially true in countries with ascendant economies, such as China today, or the US at many points over the past 100-plus years.

The structural inevitability of confrontations like the one now developing with China should compel us to consider an alternative that has never been possible until now: a single, global democracy, including everyone (holding dictators, terrorists, and other criminals accountable to the rule of law).

With blockchain technology (the secure, distributed ledger underlying bitcoin) it's now becoming feasible to securely record the votes of potentially limitless numbers of people, online. Although related challenges remain (the secret ballot, unique voting accounts, the digital divide) all of these appear solvable over the next decade or two, and possibly sooner.

Of course, it's important to consider what kinds of policies a single, global democracy might lead to. Although the actions of major foreign governments, such as China's, are troubling in many respects, the point of a global democracy is to take national governments, with their warped incentives, out of the picture, and instead put global governance in the hands of everyone.

In part, this is a matter of faith in people's essential reasonableness, the wisdom of crowds, the better angels of our nature, and the historical record, which has shown again and again that democracies, while fallible, generally produce fairer, more stable, and more peaceful outcomes than any other system of governance.

Yet it's also supported by international polling data. The Pew Research Center has compiled a rich trove of such data, including these highlights:

There are limits to the depth of this data, but what we can see is encouraging.

Obviously, beyond the top-line appeal of a call for a global democracy lie many key structural questions. For example: what constitutional rights should be guaranteed to everyone? And how should inclusive deliberation and voting should be structured? These are beyond the scope of this article, but they're an exciting area for discussion; a forum for that conversation is here.

The archaic division of our world into separate nation-states leads inevitably to dangerous geopolitical rivalries. It also prevents adequate global action on climate change (notwithstanding the recent US-China agreement), cripples our response to disease outbreaks, makes it impossible to rein in economic inequality, and traps people worldwide in poverty. In all of these ways, the present system is failing us.

Until recently, one could argue that we couldn't do much better: national borders have crudely reflected humanity's technological and administrative limits for centuries. But today, for the first time in history, a better solution is within our grasp: one global democracy.

Obviously, nation-states won't go away on their own. Those who benefit from today's structures (e.g., heads of state, CEOs of unaccountable multinational corporations) will defend them.

It will take time to build a movement in support of a global democracy, potentially decades. Or, with the accelerating rate of change, things could move more quickly.

But with so much at stake, and new technology making it feasible, the time to begin the conversation has come.