The Elf on the Shelf has arrived at our house. And no, he did not land on a shelf. He surreptitiously landed on our knife block, which might symbolize my feelings about this merry visitor. That's right -- the creepy, silly, annoying, overpriced plastic Christmas chap who has the power to send shivers of fear and excitement in equal measure down children's spines when they awake each morning to discover where the Elf has landed, has arrived for the season. 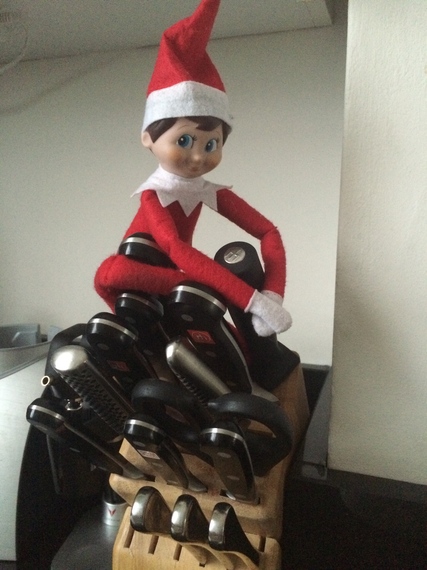 According to the Elf's accompanying story, for the next 24 days, he will be here to watch over their daily deeds (and misdeeds) so that he can return to the North Pole each night to narc my little angels out to Santa Claus, who will then decide whether my kids are worthy of the latest Transformers toy or Dino Zoomer.

Beyond the most obvious reason why I am questioning the wisdom of ever introducing this agent of Satan, I mean Santa, into my house (who on Earth has the time to remember to move this little gentleman around every night?), I can't help but wonder if we are really sending our kids the right message with things like the Elf.

I'll be the first to admit that I am not above numerous forms of bribery in the name of getting my children to behave. I've even been known to use the threat of Santa Claus watching in the middle of the summer to encourage good behavior. And the Elf is really just an extension of the notion that Santa is always watching and your child is always precariously close to being put on the Naughty List. My older son already believes that Santa is omniscient and always listening, as demonstrated by the way he has closed his eyes during nearly every toy commercial he has viewed in the last month and whispered into the ether, "Please oh please, Santa, please bring me an [insert whatever toy is being marketed to 4-year-olds just trying to watch their daily allowance of Wonder Pets]." But there's something about having a tangible "person," one that magically moves around the house (after keeping his creepy Big Brother eyes on the kids all day), that really brings the message home that you should be nice only in order to receive presents. Nothing can stop a fight more quickly than a swift finger pointed at that always-lurking little spy. And all of this has me thinking that maybe I've been doing something wrong.

So, why did I get the Elf on the Shelf in the first place, you ask? I don't think I thought much about it beyond thinking it would be a fun new tradition to get into the festive spirit. When he was first introduced to our house, I was more excited for my children to have their first cognizant Christmas than they were, and frankly, my sons barely noticed and never blinked an eye on the days that our Elf "got lazy" and remained on his perch from the day before.

But now I have a 4-year-old who just this morning was peeking up at the Elf with nearly every move, looking to see if those beady eyes were still staring at him while he finished his breakfast. I could almost see the sweat breaking out on his forehead as he wondered what the Elf's report will be tonight. And I am wondering if this is teaching my sons that the only reason to behave and be nice to others is so that someone who is watching will send a report that will ultimately help decide if they were "nice" enough for a reward. Yes, yes, that has been part of the Santa game for years. But as my children get older, I am finding my own struggle of wanting to give them everything and wanting them to grow up to be unspoiled, kind, moral and empathetic people, is reaching an apex, and the Elf is emblematic of the struggle.

I considered the literal shelving of the Elf this Christmastime. After all, the last thing I need is another reminder that I am not as clever or precious as the Pinterest moms. But my son came home from nursery school last week asking about our Elf (apparently, another child's Elf was "en route.") So, I scoured the Internet to think about how I could improve on the Elf's message. I came across this post by Jessica Gardner on Chicago Now, detailing the story of her friend, Kristi, who has her Elf leave messages asking her kids to perform random acts of kindness each day. She explains,

He challenges the kids to go shopping in the pantry for cans to bring to the local food pantry. He asks the kids to be a bucket filler and do nice things for others. He has contests to see who can be nicest to their brother and sisters and he reminds them about what we believe the true meaning of Christmas.

OK, so the fact that moving our Elf to a different shelf in the same room each day is often too much trouble for me leads me to believe that writing out messages each night in addition might be a bit ambitious. But I like the sentiment, and I'm not so creeped out by the idea of an Elf who is teaching my kids that, as a family, we are so blessed that it is our responsibility to share our blessings with others -- and not just so we get presents from Santa. So for now, I am shelving the Narc Elf -- no more threatening my kids with a daily report card. Instead, I am going to treat the Elf how I originally intended him: as a nice little way to get my kids into the festive spirit (he's coming to help us get ready for Christmas!), but I also might throw in a few messages from our Elf with ideas on how they can give back to others. For me, that is what holiday spirit is really about.