Statement by Alan Reuther, former legislative director for the United Auto Workers and Teresa Ghilarducci, director of SCEPA's Retirement Equity Lab at The New School. Reuther and Ghilarducci are members of the Bipartisan Policy Center's Commission on Retirement Security and Personal Savings.

The Bipartisan Policy Center's (BPC) Commission on Retirement Security and Personal Savings released a comprehensive report. In their work, the Commission rightly identified a pressing national crisis. If we don't take action now, tens millions of Americans will be poor or near poverty when they get old.

The statistics are dire. In 2015, 2.6 million older workers will fall from the middle class into poverty when they reach 65. This is because most Americans have little to nothing saved for retirement. On average, households have only $14,500 in savings, a sum that needs to last them 20 or 30 years in retirement. The lack of retirement savings is mostly caused by a flawed system of employer-sponsored plans. Coverage is a problem. Half of American workers do not have a retirement plan where they work, which is the most convenient way to save consistently for retirement. 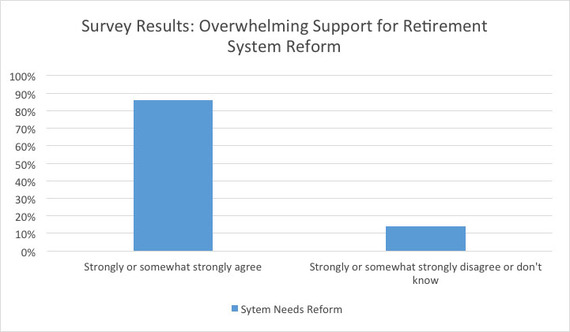 No wonder over 80% of Americans are seriously worried.

The first step to solve the coming retirement crisis is to make Social Security solvent, without reducing benefits for lower- and middle-income persons.

However, in the interest of encouraging compromise, the Commission Co-Chairs used a traditional budget planning exercise to deal with Social Security financing. They operated under the restriction of a roughly 50-50 balance between increased revenues and changes to benefits in future years. The Co-Chairs' letter admits that not all Commissioners agree with this constraint, and we were among those who dissented. We feel the retirement crisis demands new thinking.

We applaud the Commission's recommendations to increase the replacement rate and amount of wages covered by the bottom bend point, provide enhanced survivors benefits, and establish a new basic minimum benefit. These proposals improve the progressivity of Social Security by providing increased benefits to those who need them most - lower-income individuals who are unlikely to have significant savings in workplace retirement plans or other private savings.

However, we oppose the proposals to switch to the chained CPI, to increase the retirement age to 69, to reduce the replacement rate for persons in the middle bend point beginning at the 50th percentile of the Average Indexed Monthly Earnings distribution, and to reduce initial benefits for all married claimants to pay for the enhanced survivors benefits. Taken together, the impact of these proposals will result in a significant reduction in Social Security benefits for many low- and middle-income individuals and families over time.

Instead of cutting benefits for these persons, we believe it would make more sense to expand the revenue available to finance Social Security. This could be accomplished by raising the taxable maximum for the payroll tax beyond the level suggested in the Commission's recommendations (which only reaches 86 percent of covered wages, compared to the historical benchmark of 90 percent). In addition, new sources of revenue for the Social Security system should be considered.

By increasing the revenue available to Social Security, we believe it is quite possible to retain the progressive elements in the Commission's report while avoiding the harmful benefit cuts for low- and middle-income persons. In our judgment, this represents a far better approach to improving retirement security for all Americans.

We also applaud the Commission's acknowledgement that the existing employer-based retirement savings system that is supposed to supplement Social Security is inadequate. Relying mostly on 401(k) plans, the system is voluntary, commercial and individually-directed. The report emphasizes the need to fix this broken system through a series of proposals to expand access to retirement savings plans for millions of Americans.

While these proposals represent a positive step forward, a bolder approach would ensure that all Americans have a pension to supplement Social Security. The Guaranteed Retirement Account (GRAs) proposal, authored by Tony James, President and Chief Operating Officer of Blackstone, and Teresa Ghilarducci, commission member and economist, would provide workers with their own retirement savings accounts. Contributions would be made by both workers and employers. Upon retirement, workers' savings would be turned into a guaranteed lifelong stream of income to ensure they don't outlive their savings. An expanded Social Security system and a mandatory pillar of prefunded pensions would enable all Americans to maintain dignity and security in old age.