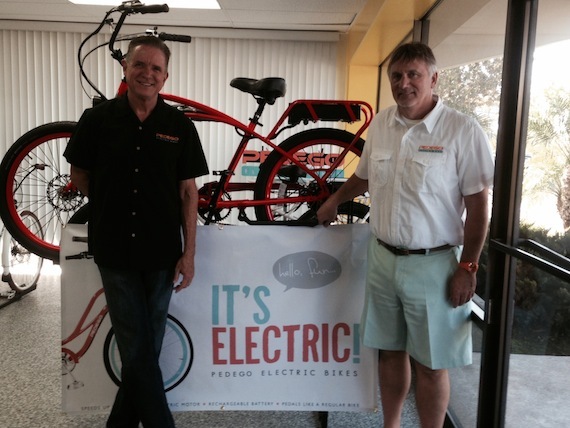 Don DiCostanzo and Terry Sherry never expected to end up transforming the bicycle industry when they bought their first electric bikes nine years ago.

"All I wanted was to be able to ride a bike again," says DiCostanzo. "I lived at the top of a hill and had stopped riding because I dreaded having to ride back up that hill on the way home."

He bought an electric bike online and, although it turned out to be "a terrible, terrible piece of junk," it got him up the hill. It also got him thinking.

"I bought six more electric bikes and had them all in my garage," he remembers. "People would come over and ride because they had such a good time on them, but couldn't find a place to buy one. I realized there was something there."

In 2007, DiCostanzo opened a bike shop in Newport Beach, California, and his old friend, Terry, was one of his first customers. He bought two electric bikes so he could ride with his wife, who had sworn she would never ride a bike up the hill to their house again. The electric bikes changed everything.

"As soon as you get on the electric bike, you get it," says Sherry. So when DiCostanzo asked him if he wanted to get into the business with him, he jumped onboard and their company was born.

Although neither knew anything about the industry, they knew what they liked.

"We went to a professional designer and said, 'Look, we want to make some really cool looking bikes,'" explains DiCostanzo. "'We want to make 1950s and '60s beach cruisers like the ones we grew up with. We want to make a bike for us. For the baby boomers."

That would end up being a smart business decision, seeing as the baby boomers are now in their 50s and 60s themselves -- DiCostanzo is 57 and Sherry is 58 -- and they welcome the opportunity to be active with a little help from the throttle.

Unfortunately the traditional bike shops were not as welcoming, telling Pedego to "get out of here," and forcing DiConstanzo and Sherry to create an alternate distribution method. They tried selling at scooter stores and even tried a multi-level marketing kind of process for a few months in which people bought three bikes and sold them out of their homes. Although it worked well, once they sold to their friends and neighbors, it was over.

Then, one day, a customer came in and said he wanted to open a store in Huntington Beach, California which would only sell Pedego bikes. DiCostanzo and Sherry agreed, on one condition: That he offer rentals, too.

"Our number one goal is to get people on the bikes," says DiCostanzo. "They're such word of mouth products and people need to go for a $20 ride before they make a couple of thousand dollars decision."

Today, Pedego is the largest electric bike retailer in the country, and almost every one of the company's 60 dealers is a previous customer, including Beth Black and Brian Ballard, who own Pedego Long Beach. Black discovered electric bikes when Ballard, a diabetic, couldn't make it home and they had to call someone to pick them up with their bikes.

"There are so many stories like that," says DiCostanzo. "So, although the real joy for us has been getting people back on bikes and having fun, it has been tremendously rewarding to help people become entrepreneurs who probably never would have otherwise if they hadn't rented an electric bike one day."

According to DiCostanzo, "We work with a lot of boomers displaced from corporate America, who are looking for second careers. Many of them already have entrepreneurial skills and would rather work 80 hours a week at a job they love than 40 at a job they hate. This is a particularly satisfying business because we sell fun."

Although the bike industry itself has been on a down cycle, going from 10,000 dealers to 4,000 over the last ten years, electric bike sales are on the rise. Pedego has sold more than 20,000 electric bikes to date, and are now doing business in 40 countries around the world.

As the trend continues to climb -- experts predict global annual sales of 40.3 million electric bikes in 2023, with North America now surpassing the Middle East as the third largest market in the world -- it's lucky they have that throttle to help them uphill.