There's nothing like your first time -- first time taking a safari, that is. Deciding to do one is easy (yes, a resounding yes), but picking a destination is more difficult -- what with a long list of magnificent countries to choose from. To help, here's a handy overview of when to go, what you'll see and where to stay.

Across the board in Africa, August through October is prime safari season. While there are never any guarantees with wildlife, this timeframe is when you're most likely to see most species - it's the dry and everybody's mingling around waterholes. But let's take it country-by-country, and hone in on some of the highest rated lodges, because, hey, on the off chance you don't catch a glimpse of your fave creature, a comfy bed, big bath and fine dining can relieve any disappointment. Most are all-inclusive so that makes things extra easy. 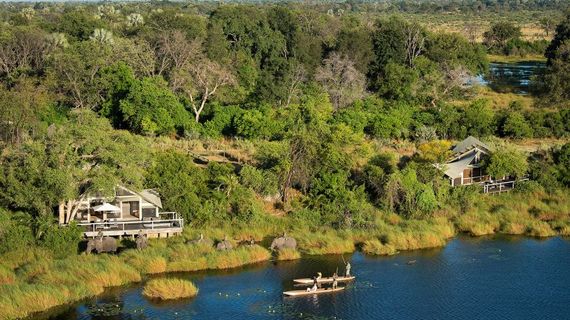 Botswana
Northern Botswana is the hot spot for elephants, and a boat cruise down the Chobe River is a great way to see them. The abundant Okavango Delta is home to big cats, wild dogs and birds galore. Meerkat lovers should head to Makgadikgadi Pans. That area gets busy with migrating zebras, and in turn predators, come December.

Abu Camp offers elephant-back safaris -- a unique way to see the rich Okavango Delta region. The tent accommodations feel at one with nature while still being really, really ridiculously luxurious.

Savute Elephant Camp in Chobe National Park is for those who'd rather just watch those largest of land animals -- they're known to just amble by. Right on the river, it draws a lot of thirsty beasts.

San Camp is another tented oasis, one that makes guests feel like the region's original explorers, albeit cushier. Its place on the edge of the Makgadikgadi Salt Pans provides easy access to meerkat territory. 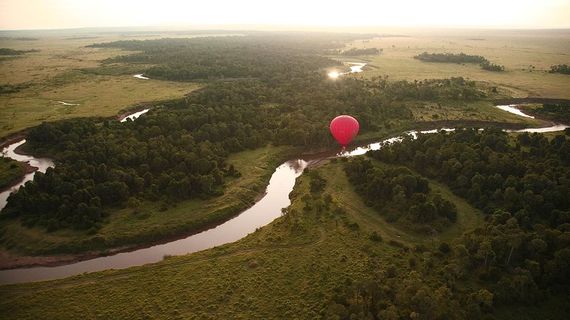 The popular Maasai Mara is a goldmine -- big cats, elephants, hippos, giraffe, crocs, baboons and the largest antelope, just to name a few -- and it too plays host to the epic wildebeest migration through October. A quieter but no less astounding spot is Meru National Park, made famous by the lioness Elsa immortalized in the book and Oscar-winning film Born Free, and home to a black and white rhino sanctuary.

Olarro is perched on a hillside with jaw-dropping views in close proximity to the Maasai Mara National Reserve. The ways to see wildlife here are varied -- in addition to the 4x4 variety, there's helicopter and balloon options.

Elsa's Kopje Private House, so named for the famed lioness and situated above George Adamson's original camp, also offers bird's eye views, but from Mughwango Hill overlooking Meru National Park. The thatched roofs and earthy décor blend into the background so as not to inhibit the natural beauty. 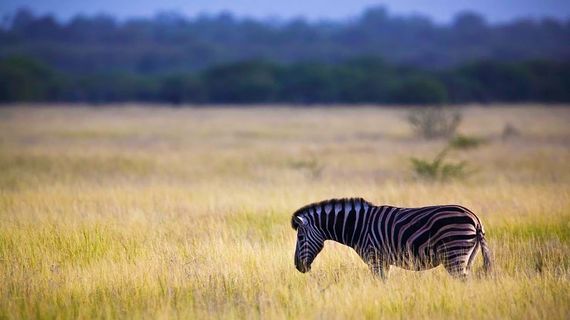 A range of wildlife is seen at Etosha National Park. The many waterholes around its salt pan draw a crowd in the dry season, including rhino, elephant and rare black-faced impala. Lions drop by too, either to drink or ambush prey.

Villa Mushara lies near Etosha, and offers but two 1,400-square-foot villas for an exclusive experience. A dip in the swimming pool may offer extra entertainment should a kudu or warthog decide to chill out in the grass just beyond. 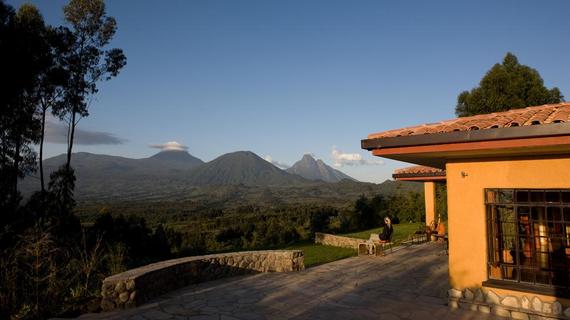 Here, it's all about the mountain gorillas, the ones made famous by naturalist Dian Fossey. They live on the slopes of the Virunga Volcanoes, a few hours from the Rwandan capital, Kigali.

Sabyinyo Silverback Lodge, with volcanoes in sight, offers the ultimate gorilla experience. They'll clean your boots after you get back from your mountain trek, but even better than that, they're operated by a community trust that works on further conservation and protection initiatives in the park. 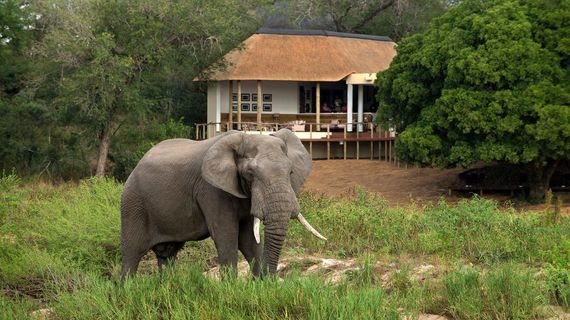 A diverse landscape -- desert, woodland, mountains, ocean -- provides the country a diverse cast of creatures. The southeast corner's slew of game reserves provide the Big Five -- lion, elephant, buffalo, leopard and rhino. For leopards, Sabi Sands is the place, while Timbavati is where you'll find white lions -- those rare cats with a recessive gene that makes them paler than most. Adorably coy aardvarks and multitudes of meerkats await in Tswalu Kalahari. And you can also get a dose of marine species such as penguins, whales and sharks with a trip down to Cape Town.

&Beyond Exeter River Lodge lives on the Sand River in the Sabi Sand Game Reserve. The private verandas are perfect for watching the river and wildlife roll by, with glass of wine in hand, naturally.

Ngala Tented Safari Camp has the seasonal Timbavati River running through it. Raised off the ground, the tent-style accommodations leave a light footprint. Here's where to stay for proximity to those regal white lions.

Tswalu Kalahari Reserve has rolling dunes within view, the property also offers horseback safaris. When not on game drives to see black rhinos and black maned lions, there are also archeological explorations and hot-air balloon rides. 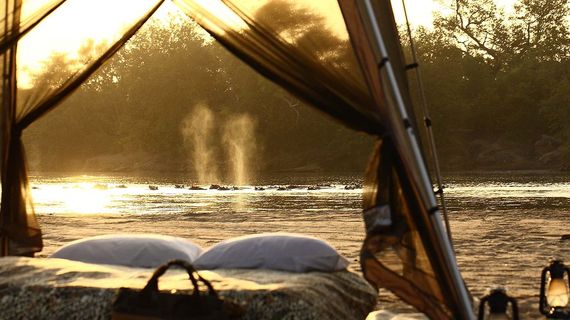 Here the Big Five are easy to see. There's even a chance of glimpsing the critically endangered black rhino. In the northern Serengeti, the start of the dry season is the time to watch wildebeest migration, while January and February is when the calves arrive. The Serengeti is also the spot for big cats and the endangered African wild dog.

The Retreat Selous lives within the largest protected wildlife sanctuary in Africa. With its position on the banks of the Ruaha River, canoe adventures are readily available and it attracts more than 400 kinds of birds. The truly adventurous can hit the road and try nomadic tenting.

Ngorongoro Crater Lodge has three camps that operate independently, with the Tree Camp being the most secluded. As the name suggests, it's near the Ngoronogoro Crater which puts that region's resident black rhino population in reach.

Singita Grumeti Reserves, Faru Faru Lodge borders the Serengeti National Park, and its own surrounding grasslands boast antelopes and exotic birds to watch in the restful moments between game drives. 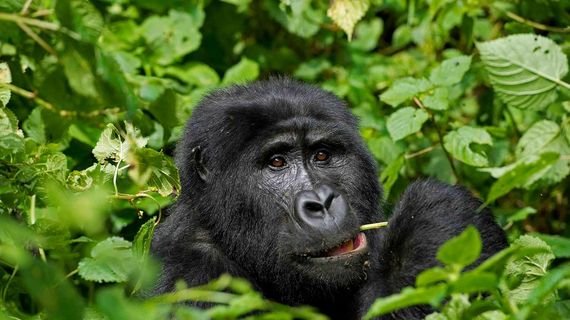 Like Rwanda, Uganda offers amazing access to mountain gorillas, and other primates too, with around 20 species including chimpanzees. For big game head to national parks such as Queen Elizabeth, Lake Mburo or Kidepo.

Sanctuary Gorilla Forest Camp takes you deep into the Bwindi Impenetrable Forest, a UNESCO World Heritage Site, where some 350 gorillas roam. That's a treat, and so is their spa.

Apoka Lodge is Kidepo National Park is authentic luxury -- the savannah-inspired accommodation is made of wood, thatch and canvas. In the morning, track game along the riverbed; in the afternoon, cool off in the property's rock pool. 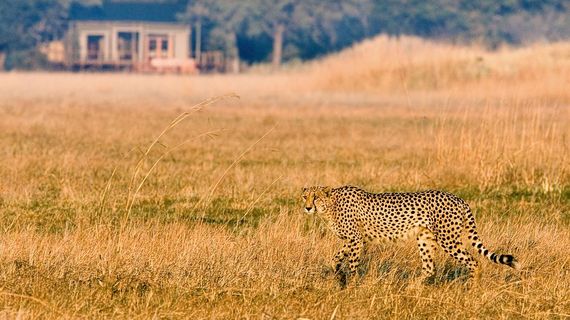 Kafue National Park, one of the biggest in Africa, teems with both herbivores and carnivores, in particular it's known for cheetah. If it's leopards you're after, Lower Zambezi is the park. The only real game the Victoria Falls area offers is a few protected white rhino, other than that it's mostly bird-watching and adventuring.

Kapinga Camp in Kafue only has four rooms ensuring its small group of guests get proper attention. In the Busanga Plains wetlands witness buffalo, cheetah, lion, and zebra from the deck, as well as venturing out for day or night drives.

Royal Zambezi Lodge sits on the banks of the Zambezi River and that means water activities -- casting for tiger-fish and canoeing to see crocodiles and hippos. The property also has one of Zambia's only spas to pamper you après-safari.

The River Club lies further up the Zambezi by the famed Victoria Falls. It too will boat you by hippos and crocs, but also boasts manicured gardens well-suited to croquet. Bungee jump off the Falls or simply fall into the Club's riverside infinity pool. 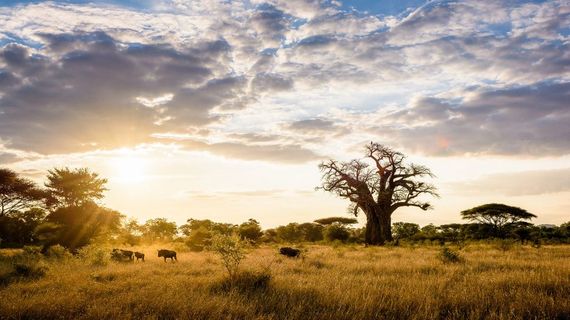 With President Mugabe's dubious rule and Cecil the lion scandal, Zimbabwe isn't the safari Mecca it once was. However, the private Malilangwe Wilderness Reserve has protected itself from much of that, escaping heavy poaching that the country's political upheaval has wrought. In addition to the Big Five, they like to show off their Little Six -- six species of smaller antelope. The country also has its side of Victoria Falls for a natural wonder of another kind.

Singita Pamushana Lodge is one of only two in the Malilangwe Reserve, and it's magical. Inside, bright colors abound, and outside, ethereal flora casts its spell. There are twice daily game drives, and also tours to 2000-year-old San Bushman rock art.

The Victoria Falls Hotel on the Zimbabwe side of the Falls provides a very different Colonial-era experience with four-poster beds and antiques. Here, elephant-back safaris and canoeing are options, as well as the high adrenaline activities the area offers.