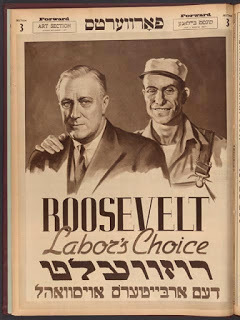 All the talk about illegal immigration in the last election, has brought back the memory of more halcyon days at the turn of the l9th Century when America opened its arms to a whole new generation of immigrants who sought refuge from the pogroms of Czarist Russia. Today's immigrants illegal and otherwise have come to this country contributing a whole new host of skills. But back in the days when Jews immigrated from the Pale of Settlement there was one skill that literally every single new arrival came with and that was opinion making and having. Every refugee seemed to come with their own ideas about how the world should be and what's currently occurring on Facebook and other social networking sites today pales in comparison to the melting pot of verbiage produced by a generation of oppressed Jews who finally had their gags removed. Yes Jews would become tailors and butchers, bakers and candle makers, but the early 20th Century was the heyday of Yiddish theater and culture when papers like the Forward thrived and an advice column named A Bintel Brief, created by the legendary Forward editor Abraham Cahan, had a huge following. It was the heyday of the actors Jacob Adler and BorisThomashevsky, and the novelist Joseph Opatoshu and literally all of the Lower East Side were self appointed drama critics, who vetted productions of Shakespeare and Chekhov which were rendered in Yiddish. It was also the age of socialist politics when broadsheets competed with newspapers and there wasn't always a line drawn between editorial page pronunciamentos and the reporting of straight news. The only problem with opinion having and making was that it was a trade for which their was little remuneration--which could be a problem when you had to support a family. Gertrude Berg was famous for the comments she made when she opened her Bronx window on her television show, The Goldbergs, but she was one of the relatively few who made careers out of speaking their minds.