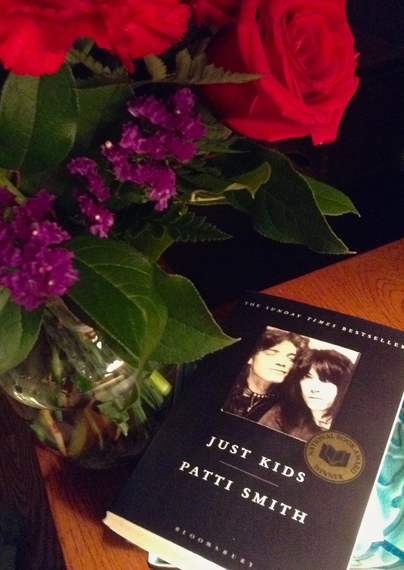 Patti Smith's memoir of her early life and relationship with Robert Mappleworth, Just Kids, is a touching journey of discovery, when an artistic impulse defined a state of being, and the risks taken to find it were the only tools with which to capture it. Patti and Robert's need to find their creative voice within their interdependence is palpable and moving and proof that an artistic path is chosen for some before they are born.

Once at a talk by a Californian Start-Up entrepreneur, a member of the audience asked him in a worried tone about his daughter's aspirations to be an artist:
"How do I know whether this is the right thing for her?" He inquired, visions of her living off income-deprived streets interfering with his expensive suit and shoes.
"Because she can't do and be anything else."

This is the story of Patti Smith and Robert Mapplethorpe.

Their artistic impulse was vague, circuitous and amoebic. It took shape and ambition over time, the kind of time we feel we don't have any more even though we are meant to live until we're a hundred and work until the day before we die.

Mapplethorpe's development of an artistry that embraced a sexuality bordering on the pornographic was not, curiously, dictated by his desire to succeed but more by an inevitable connection to himself. These explorations took him to dark places and were at times painful to his closest ally, yet Patti Smith accepted and understood in much the way she did about everything. It's difficult to think of anyone who most genuinely embraces the concept of "Live and Let Live."

The tenderness and eloquence of their relationship is in contrast to the androgynously edgy and punk-looking Patti, and the macho prostitute beauty of Mapplethorpe. And throughout the book, from a fragile 18-year-old, amid the chaos and mess and creativity of 1970's New York, to a mother in her forties with fame to her name, and a chosen stability in Detroit, Patti remains a personification of truth, to herself and, therefore, to those she touches. She is the angel version of Alice without the rabbit; un-rushed, bias-free and un-phased by the mad queens and weird tweedle-dees and dums, she always finds a mushroom stool to sit on and observe, quietly accepting. And she takes on a hovering quality over scenes that feel Bosch-like in the frantic antics that it took to stand out in Andy Warhol's Factory days of old.

When Mapplethorpe enters the wealthy world of patrons and Upper East Side parties she moves inside it uncomfortably, recognizing his enjoyment, and this milieu as his and not hers. This she does without a word of criticism nor a sense of betrayal, unlike the socialist banging on about the evils of private enterprise.

Her lack of pique towards the errant behaviour of others, particularly Mapplethorpe's, is due to an inherent acceptance of what every human must explore for him or herself. She conserves that critical questioning for her own journey. She is steadied by her inner voice and knows instinctively to put herself in an environment that suits her. Her extraordinary life is due to this; a naïveté turned sagacious to avoid the buffeting of others' craziness. This is someone who not only survived but fulfilled herself in a world at times determined by some of the worst excesses and wrong turns, saved it seems by her love of great writers, immersing herself in reading, thinking and absorbing their struggle. And saved too by the concept of sacredness triggered by a Catholic upbringing, in which an in-built kinship to the smallest and humblest object was characterised by its historical or interpretative value. Meaning and compassion are her ultimate judge and jury, and a reminder to those of a younger generation who hanker after instant gratification and viral recognition.

So in Patti Smith style I come to this book in my own time, five years after it was first published, its poetic relevance remaining as timeless as her love of Rimbaud. And a poet Patti Smith most definitely is, her ways of looking and noting defined by a light, gentle wisdom, unencumbered by prose and lengthy explanations. A joy of a read and a woman whose head at near 70 I would think is a joy to be inside.