"Whoa, whoa, I told you that I did not want you to shave it bald!" I told the barber who was cutting my son's hair. "How can I tell you this?" he replied, "You've got a real nig*** here. He is a native boy. He is from the tribe. This ain't pretty hair. This is the best cut for him." I forced a giggle and then entered a state of shock. I'm ashamed that I did not have the presence of mind to pick up my 3-year-old with his half shaven head and run out of there.

Despite decades of African-American rappers claiming to reappropriate the n-word from its oppressive roots, the word retains its venom. Moreover, the barber, a black man, used the n-word in its original manner: to denote lack of human worth. The barber was saying that my son is a full-blooded African boy and therefore his hair is not "pretty" and should be completely shorn. Can we assume that the barber was also saying that the pure-blooded African from which that kinky hair grows is less worthy?

Incidents like this are the worst fear of mothers. I, like most mothers, look at my two children, 3-year-old Jojo and 12-month-old Miles, with awe and admiration. I see beauty in every aspect of them, from their kinky hair to their round, brown toes. I marvel at their intellect and delight in their quirks. Every day, I pray that they and others, will see what I see. 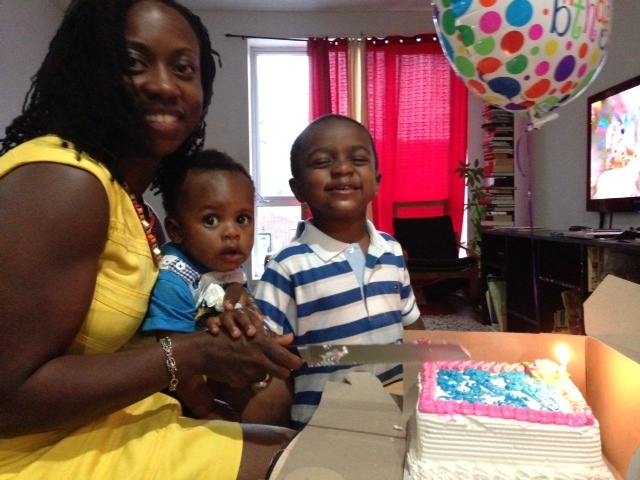 On one hand, there is the persistent colorism in certain segments of the black community. Colorism is the idea that the closer a person is to being white with respect to skin tone, hair texture, and facial features, the better that person is. Most historians agree that, in the African-American community, this intra-race discrimination is rooted in slave masters' preferential treatment of lighter, mixed-race slaves, who were often the masters' illegitimate children.

Colorism is often subtle. For example, a grandmother may admonish a grandchild not to play in the sun. Other times, it is harsh. Children taunt each other for being "pi** colored" or "sh** colored." More recently, it manifested as comedian Sheryl Underwood, a black co-host of CBS' The Talk, commented that Heidi Klum's custom of saving her biracial childrens' shorn afros was "nasty." But a few second later, Underwood affirmed her white co-host's, Sara Gilbert's, practice of saving her white child's hair because it is "beautiful, long, silky stuff." Underwood's placement of a white child's straight hair on a pedestal and her belittling of a biracial child's afro-textured hair represent the privileging of European physical attributes over African physical attributes which is the cornerstone of colorism.

Sadly, this internalized racism may appear in the hearts and minds of the very people whom African-American parents trust to educate their children. Many weeks ago, an Oklahoma school with a majority African-American board sent a 7-year-old black girl, Tiana Parker, home in tears for wearing her hair in locks, an age-old method of styling afro-textured hair. The school's dress code says that "hairstyles such as dreadlocks, afros, mohawks, and other faddish styles are unacceptable." Although the school's ban has been lifted in response to public outrage, little Tiana Parker's emotional scars may remain.

On the other hand, African-American parents fear external racism. We fear that non-black teachers will view our children as "bad kids" and punish our kids disproportionately -- as revealed in a study which concluded that black children are suspended three times as often as white classmates, twice as often as Latino classmates and ten times as often as their Asian classmates in middle and high schools nationwide. Such suspensions increase the chance that a black student will drop out of high school which could amount to a financial death sentence in our competitive economy.

We worry that, even if we can afford elite schools, our children will be socially marginalized. Many prep school students of color discuss the sadness of being perpetually ignored by classmates' whose racial and economic backgrounds differ from theirs. This is not surprising given the fact that research suggests that even very young children have adopted attitudes of white bias.

Worst of all, we fear that even if we do everything right and our child is a good kid, because of our child's skin color, adolescence, gender, and perhaps choice of trendy clothes or music, our child could be perceived as a "punk" or "thug" by a gun-toting adult bully and that perception could prove deadly.

So what is a mother to do in addition to praying? Write stories to effect cultural change.

I had once read that that the best way to convey a lesson is through a story. But I'm not artistic or creative, so I thought. Then I watched Super Soul Sunday on OWN and a speaker said that art is no different from prayer. I started praying for a story. God gave me Sunne's Gift. It is a children's story -- in part a creation myth, and in part a celebration of diversity -- about a magical creature with spirally hair that grows toward the sun named Sunne. Sunne's three straight-haired siblings, who also have magical powers, poke fun of Sunne's hair. Sunne starts beating the spirals of hair to fit in, but as a result...

With this story, I hope to promote a culture of acceptance in which we see that celebrating diversity is not just "nice to do," it is essential for our survival. By spreading this perspective, I hope that my prayers of a more loving world for my boys, and all our children, will be answered.

Ama Yawson is a Brooklyn-based mother, attorney, writer and co-founder of the children's shoe line Joojos. She hopes to publish her first children's book, Sunne's Gift.

More:
Racismblack parentsColorismParentsparents-moms
Newsletter Sign Up
Raise the kind of person you'd like to know
Subscribe to our parenting newsletter.
Successfully Subscribed!
Realness delivered to your inbox