A "NOVEL" WAY TO READ A NOVEL! HuffPost has revolutionized journalism in the last few years by taking over the news and news feature delivery business. Now I'm using the blog to venture into the realm of story publishing. Starting this week, my novel Seeing Red 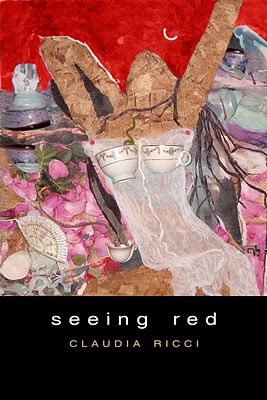 will be serialized, three times a week, on the Huffington Post. Here is the third installment of the book, a chapter called "Wretch!"

Tonight she's been sleeping, or trying to, right beside the toilet bowl. Because she is that desperate. Because she can't seem to get back and forth from the bedroom to the bathroom quickly enough. Because she has thrown up so many times that she's lost track. It is some time after midnight now and she has dragged her pillow and Noni's afghan to the tile floor and she is flat on her back, saying, "I'll die here, I'll die here," and her head is so close to the white porcelain toilet that she can feel its cool surface through her damp dark curls.

She is weaker than she ever remembers being before. She can barely lift her head up above the white ceramic rim. She screams out, "Help me somebody! Help me, I'm dying in here." Not that she really expects anybody - with him moved out and both boys asleep--to come to her aid. But then, her darling, Jack, she can always, always count on him, he comes stumbling through the bathroom door, groggy, eyes in a squint. Instantly he is crouching beside her, his warm hand pressing her arm.

In the very next moment, she thinks of Jack's father, and she throws up again.

And then she wipes her lips with a wad of toilet paper, and she leans into her cold sweaty forearms, the prayer position, and then she prays that she will simply pass out. But she doesn't, not yet. Jack kneels on the floor right next to her, and he places his hand on her back.

"Ma, let me...let me call somebody. Karen. She'll come. You know she'll come. At least then...I mean she's a nurse and she'll know...or at least she's somebody who can..." he shrugs, wrinkles his face. "You can talk to her at least."

He leaves, and now, cross-legged on the floor, her head twirling, she sees Ben Sr. the way he was that last night, as he threw a few gray under things into his frayed suitcase on top of an Irish knit sweater, on top of a polo shirt and a couple pairs of khaki pants. "Oh so you didn't plan it this way? So which way did you plan it exactly?"

And then later, just before he dragged the suitcase out the back door, when he stopped, came right up to her in the kitchen, stood no more than two inches away, close enough so that she caught the whiskey on his sour breath and the red threads in his haggard eyes and the twitch in his right eyelid and even the flecks of dandruff dusting his shoulders.

"So tell me," he whispered then, leaning even closer, his face so close that for a moment she half expected he would kiss her. "Now that it doesn't matter anymore, tell me who it is and how long you've been screwing him, huh, Ronda? A year? Two? Three? Tell me. Maybe it'll make me feel better."

She had turned away, had covered her eyes, but he had stuck with her, had circled around, had kept his face twisted so close to hers that his nose practically brushed her lips. And he'd continued the harangue, too, asking over and over again for her lover's name.

"Who is it, Ronda? Jeff French? Bill Antos? Ted Harris? Who? Somebody from Williams? A creep from the kids' school? Who? Who can I kill, huh?"

She raised her shoulders and kept shaking her head until finally, unable to keep quiet any longer, she looked up, and blurted out two words, softly at first, but when it was clear he hadn't heard them, she said them again, loud, she screamed them in fact, at the top of her lungs.

The words hung there, with no explanation, Ben just staring, open mouthed, him not asking what they meant and she not saying, but soon enough, she added the rest, in a voice made gravelly from crying. "For your information it's only been four months, barely four, but they have been the most wonderful months of my life."

She dropped into silence again, and looked down, glad suddenly that she had said it, and tempted too just to tell him who it was, because what the hell difference would it make? She might have told him, too, except that when she raised her eyes again, she saw that the menacing look on Ben's splotchy red face had dissolved, and his shaggy grey head was crumbling over into his hands.

In the next moment his beefy frame began to shake and he started breathing hard and coughing and making a rather pathetic snorting noise that sounded like it was coming from an animal stuck inside a drum. In the end, that sound is what started Ronda's own tears going.

"I'm sorry, Ben, I'm sorry but you asked," Ronda said, but by then, she was talking to no one, because just as suddenly as he'd started crying he had fled, outside, he was already lifting the garage door, and as he started the car backing out of the driveway he rolled down the window and gave her the finger. "You wait, Ronda," he'd called out. "You'll pay for this. You'll see. You'll pay."

And now she is paying, rather dearly, right here in the bathroom. And as she raises her chin barely over the rim and pukes into the bowl again, a thin green drool, it occurs to her that surely, Ben didn't mean it this way. Or maybe he did.

"I called her, Ma," Jack is saying, laying his hand on her back once again. She fumbles for his other hand and squeezes it. Hard, so she can feel the long bones of his fingers. He kneels. They sit there together in the bathroom on the floor, as if there were nothing more normal. If her mouth weren't so foul tasting, she would kiss him.

"Thank you honey," she whispers, curious now how Ben Jr., can possibly sleep through all this. Or maybe, she thinks now, he actually hears every single thing going on. Maybe he's just keeping to his room. Like he did the night Ben Sr. left. After it was all over, Jack had tiptoed out to the living room, had embraced Ronda, had kissed her on the face, had given her a Kleenex to blow her nose. Ben Jr., meanwhile, had remained holed up in his room, just like he had almost every other night since he'd come home from college for the summer.

When he emerged the next morning, he poured himself a glass of orange juice and left for work, his face revealing absolutely nothing.

"I never realized it was so hard," Jack says now. "You know, to have a baby."

"No Jack. It isn't. It doesn't always go this way," she is saying, thinking how the poor boy will be frightened away, permanently, from fatherhood.

"Isn't there...isn't there some medicine or something?" he asks. "I mean, for God's sake." Jack. Always so practical. So logical. Just like her father. Always thinking there has to be a solution. Money. Hard work. Guts. Determination. Only, there isn't always. The night her father died, there was no solution. No matter that the EMTs worked on him in the living room, with Ronda watching, crying, wishing for a miracle, for close to a half an hour. There was a massive rupture of the heart tissue in his chest. That was that.

"Oh maybe there is a medicine," she says wearily, weepy now, thinking about her father. And about how sad it is that Jack even has to know that she is pregnant. She was determined to keep the secret until she was sure what to do. But then, she became so terribly sick that she was forced to tell him the truth - no, it wasn't a stomach flu after all.

"I'm going...I'll call the doctor in the morning," she says now, her voice wavering. "Karen says her doctor gave her something once when she was sick like this."

READ THE CONCLUSION TO "WRETCH" on Sunday, February 13, 2011. Catch up with Seeing Red, and READ ALL THE NOVEL SO FAR AT "Seeing Red on the HuffPost!"