"A book itself is a little machine....Writing has nothing to do with signifying. It has to do with surveying, mapping, even realms that are yet to come."
Deleuze and Guattari, A Thousand Plateaus


Language has been called the first technology. A device for enframing, it condenses the complex, continually varying input of data that constitutes individual experience, making it available for use over time and space. Interactive fiction (IF) is a game form of literature in which the player uses a parser, a text-generating, text-accepting computer program, to control a character and move through an environment. As in the real world where language delineates objects and defines places, positions and relationships, in IF, the vocabulary of the parser defines the world in the game.

"The first step for the player is figuring out what language the game speaks...One of the joys of adventuring is that discovery of the extents and limitations of the game's vocabulary."Jim Menick, Basic Adventure and Strategy Game Design for the Apple (1984)

A delightful example of this is Emily Short's subversive take on the Cinderella story, Glass, in which the interactor assumes the player character of a caged parrot in the home of the evil stepmother on the morning after the ball. Here the parser recognizes "say," "sing," "poop," "fly," and "preen," but not "fold," "fluff" or "peck." The parrot can say "love," "Cinderella," but not "liar" or "stop." Figuring out how to "play" the parrot, and make it speak is part of the fun. 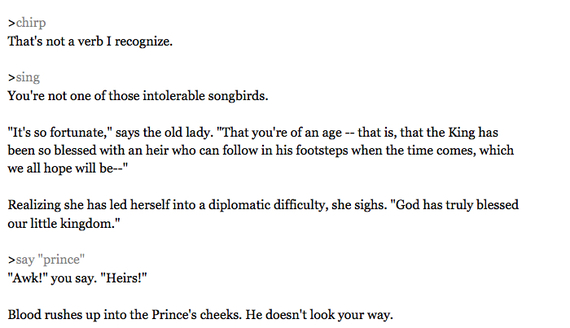 Interactive fiction makes the game-like quality of language overt. In this, it shares an affinity with poetry (see part 1 of this post) and with political rhetoric. Short's First Draft of the Revolution, with design and coding by Lizy Daly, wonderfully invokes how language is used as a tool for social and political control. Set in an alternative reality at the beginning of French Revolution, the story centers on the wife of a nobleman who is battling "anti-aristocratic forces" who have discovered "how to break the magical power that has kept the nobility in power for so long." By rewriting the language of letters exchanged between various characters, the interactor literally writes and rewrites history. 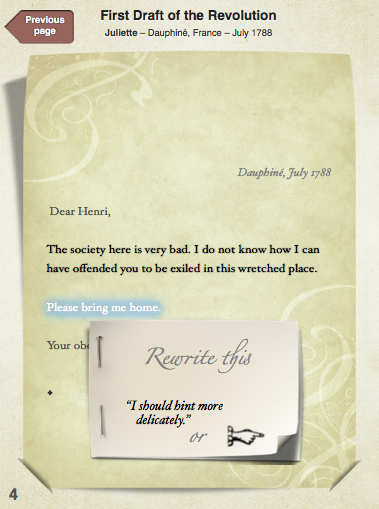 Screenshot of Emily Short's, First Draft of the Revolution

Like its video game cousins, many works of interactive fiction, like Short's reworking of the Beauty and the Beast story, Bronze: a Fractured Fairytale, are a journey through and exploration of the virtual spaces. ("Bronze" contains fifty-five rooms and comes with a map.) The reason for this is not merely that Adventure, the original IF, was modeled this way. Language, which is the sine qua non of IF, can be thought of as a form of mapping.

Some works of IF, however, eschew the referential function of language, focusing instead on its expressive capacity. For instance, Alabaster, a collaborative work, puts the interactor in the role of Huntsman wandering through a woods with Snow White. Here, the direction the conversation takes is far more important than the direction in which the characters walk.

It seems likely that the ongoing marginalization of IF is due not only to its orphan, cross-genre status as both computer game and literary work, but also because it demands real imaginative energy. Instead of presenting the interactor with a pre-synthesized world of sound and visuals, IF incorporates her as part of a cyborg story-telling machine. The interactor inhabits a dual position, not only as reader and writer, but also as self and other. In fact, most IF works begin with a scene in which the embodied self of the interactor is introduced to the virtual self of the novel. Moreover, objects in IF often disrupt the conventional symbolic order of "real life" in service of the internal logic of the story. Given this, it should come as no surprise that genres that evoke the "uncanny," such as science-fiction and fantasy, are among the most heavily represented in IF. Some, like Short's Floatpoint, overtly reference the alien-ated status of the interactor. Others, like Andrew Plotkin's Shade, gradually undermine one's sense of the familiar until reality "literally" dissolves.

I asked Short how she thinks about the uneasy position of the subject in her work.

Szilak:
In so far as the interactor's position in IF exists on the boundary between human/self and machine/other, it occupies what Julia Kristeva calls "the abject," a condition in which "there is a threatened breakdown in meaning caused by the loss of the distinction between subject and object or between self and other." Thus, what drives the interactor to explore/map the world, discover the story, and solve the puzzle is both a childlike desire to play and an adult imperative/compulsion to re-establish/find order through language. Any thoughts on this?

Short:
This self-other tension is at the heart of a lot of IF discussion and experimentation over the years. There's no single answer to how this should be resolved. Some games are all about allowing the player to shape the protagonist, to project his or her own views into the characters. Victor Gijsbers has written several games, notably "Fate" and "The Baron," that are about encouraging the player to explore his or her own ethical framework through projection into a difficult situation. Others -- Stephen Bond's "Rameses" is the classic example -- are about inhabiting a persona probably very unlike one's own, and experiencing that character's problems empathetically from the inside.

Because it overtly reveals the manufactured quality of language, IF has a unique potential to explore the social, political, and poetic aspects of it. Only a few hours of play should be enough to convince skeptical readers that interactive fiction is a fascinating, wide-ranging and relevant genre of literature. A good starting point for exploration is the Interactive Fiction Database. Writers interested in experimenting with IF, should read Short's post about tools for authors.