This is the 15th in a series on "born digital" literature.

No one has been able to pose the problem of language except to the extent that linguists and logicians have first eliminated meaning; the greatest force of language was only discovered once a work was viewed as a machine, producing certain effects, amenable to a certain use. -- Deleuze and Guattari, Anti-Oedipus

You are a blogger writing a series on electronic literature for The Huffington Post. One day, out of the blue, you receive an email from a well-respected academic asking if you are interested in writing a piece on interactive fiction.

>What do you want to write?

I admit it. I was a skeptic. When I was first approached to write a piece about interactive fiction (IF), my first thought was of a bunch of geeky teenage boys playing text versions of Dungeons and Dragons on their computers in a moldy rec-room. However, after reluctantly agreeing, I have been pleased to discover that IF has expanded beyond its "Adventure" origins. Moreover, after hours of play, I am convinced that this mode of writing still holds incredible potential. For those of us with video-game-obsessed children who show little interest in reading, the loss of words to graphics is vexing. Although some IF includes limited graphics, most consist of a text-accepting, text-generating computer program called a parser. As such, interactive fiction may be the first and, possibly, last bastion for "pure" written language in software-generated worlds.

In his book Twisty Little Passages: an Approach to Interactive Fiction, writer/scholar Nick Montfort relates interactive fiction to various literary antecedents including riddles, literary machines like the I-Ching and the algorithmic experiments of the Oulipo group, and poetry. The relationship to the latter is not as far-fetched as it might sound. Poetry pushes the boundaries of language. In making novel associations between words and between ideas, it alters our perception and, in doing so, re-creates/rearranges the world according to its own logic.

Unfortunately, until recently, parsers in IF could recognize only very limited kinds of language. Thus, the poetic potential of IF remains untapped. One notable exception is former U.S. Poet Laureate, Robert Pinsky's foray into IF, "Mindwheel" (1984), a sci-fi retelling of Dante's "Inferno" in which the interactor takes a journey through the minds of four deceased characters including an assassinated rock star, a war criminal, a scientist, and, of course, a poet.

Emily Short, whose work this post will focus on, recently published "Counterfeit Monkey," a book length IF. Though not an overtly poetic work, CM does reveal the possibilities for wordplay in IF. In CM, the player character is a smuggler trying to escape Anglophone Atlantis, "the world's greatest center for linguistic manipulation." Here, the interactor, utilizing a "letter remover device," acts as a kind of human parser, examining words for there inherent potential to become something else. For instance, progressing in the game might include recognizing the "ticket" in the "thicket" in an overgrown churchyard garden. 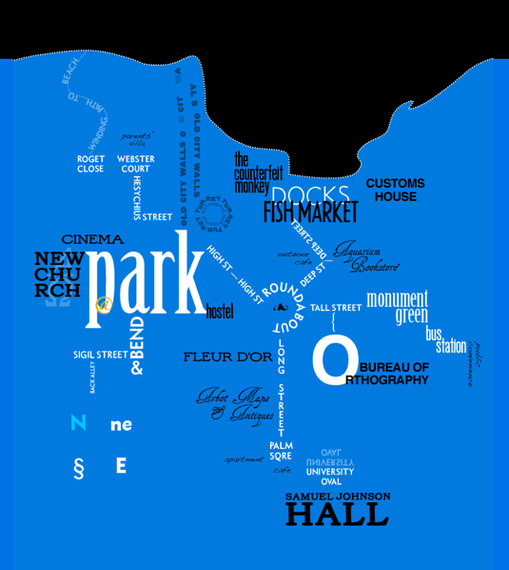 I asked Short, who has also designed video-games and non-parser based interactive fiction with the Versu project, to comment on the unique potential of text for storytelling.

The characterization of IF as a game points out a key element that distinguishes it from conventional fiction. Even if a work of IF does not include actual puzzle solving, as Montfort points out, it is always based on "a structure of rules within which an outcome is sought, also known as a game." This outcome may simply be retrieval of the story itself as in Short's first IF work "Galatea" which consists of a conversation with an animated statue in an art gallery.

Short describes it this way: "Galatea has what I call a multilinear plot: unlike traditional IF, it has no single path to victory. Instead there are a large number of endings, some more satisfactory than others, of which many could be considered "win" states. It takes only a few minutes of play to arrive at an ending, but considerably longer to find all of them."

I asked Short how puzzles and narrative interact in IF.

Szilak:
Is "winning" the game, a matter of finishing puzzles or accumulating story or both? What, in your mind, constitutes a "rich" IF experience?

Short:
This varies so hugely that almost anything I could say would be unhelpfully reductive. There's puzzle-less IF in the world. There's IF where the final ending is a downer, where there is no "winning" in the sense of getting a happy outcome.

But if one does choose to have puzzles, then I prefer to see puzzles that contribute in a meaningful way to the themes of the story. I think people accustomed to old adventure games (text or graphical) may be used to thinking of the narrative-puzzle relationship as an uneasy pairing. You do a tower of hanoi puzzle and then you're rewarded with a diary page that tells you some backstory, and the two experiences are unrelated to one another and badly synthesized.

This doesn't have to be the case. For example: in Lynnea Glasser's recent IF game "Coloratura", the protagonist is an alien with a form of empathic telepathy that lets it read and also project emotions. Many of the puzzles in the game are about manipulating other characters using this telepathy. Solving these puzzles doesn't just unlock more story; solving the puzzles is part of the story. The process teaches the player something narratively significant about all the characters involved.