The short story "A Boy's Life" was originally published in the November 2012 issue of Blazer Magazine, Israel
Translation edited by Katia Benovich
Illustration by Denis Zilber 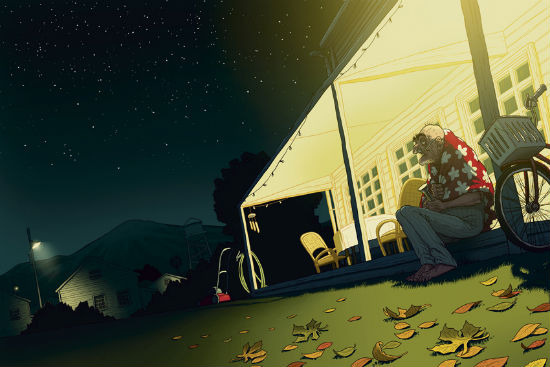 He stayed out all night again. Melissa couldn't remember when he hadn't stayed out all night. Wrapped in a blanket on the rusty garden chair in front of the tool shed, a bag of candy in one hand and a flashlight in the other. Night after night. Year after year.

"Elli," she called out through the open bedroom window. "Come inside. It's November. You'll catch your death out there."

He didn't answer. She looked at the clock on the nightstand next to the Geranium; 5:15. Nearly daybreak. He'll probably wake up soon and get inside all achy and sleep stricken. What was he thinking after 82 years? How much is that in nights of false hope in front of the shed?

You stubborn old fool. You should get Pneumonia.

Melissa walked out to the yard more enraged than worried, but the balance quickly shifted as she got closer to the wrapped figure. His snores sounded choked, gasping for air and not finding it.

They left the hospital in silence, processing the information separately. For one moment, only obvious after a lifetime together, he took her train of thought to the next station. I have to call NASA, Melissa thought and tried to recall the name of that nice scientist with the broad sideburns. Littleton, thought Elliott. He's gonna cut me to pieces before he lets me die quietly from this tumor.

NASA stayed in constant yet remote touch. At first, when Elliott was still that boy -- and that teenager, and that young man -- who made actual contact with an alien, hardly a week went by without a full physical or a brain scan. Eventually however there was nothing left to test and Elliott turned into that man -- and ultimately, inevitably, that strange old man -- who keeps saying that he doesn't know how to feel.

That was the one thing Melissa could never understand. She accepted it, like everything else about her husband's famous childhood, but she never got it. Once in a while, in intervals of five to nine years, she tried to wrap her head around that. To put aside the initial wonder -- the well documented yet mind-blowing fact that ten-year-old Elliott's feelings and thoughts got synchronized with those of an extra-terrestrial -- and grasp the secondary claim. What does it mean that he no longer knows how to feel?

Many years ago, perhaps to humor her after purchasing his mother's house and investing a small fortune in the detailed restoration of the place the way it was when he was a child, Elliott tried to explain it to her. There was a terrible moment, he told Melissa and his eyes clearly saw something that happened so long ago, that I thought I'd lost him. He was already packed in ice when they took me to say goodbye, and that was the first time I felt it. I think I actually said it out loud, in some childish hope that he'd hear me: you must be dead now, because I don't know how to feel.

But he didn't die, said Melissa. His heart started beating again and he went back home.

And I stopped feeling, said Elliott in a harsh voice. More accurately, he said, my ability to experience feelings diminished as the light years drove us apart.

It took some effort to ignore the implications on their marriage -- they got married when Elliott was 28, after almost two decades and who knows how many years of diminishing feelings -- and offer an alternative explanation. Maybe, she said, the real problem is that the biggest thing that ever happened to you happened when you were 10-years-old. Maybe it's just a matter of sensitivity threshold. Maybe you're the inter-planetary version of a child star spending his adult life desperately trying to relive his 15 minutes of glory.

She never spoke to him so bluntly. She did it partly out of vengeance of the implicated idea that he never loved her and the kids, or could not have loved them; another part of her, the psychiatrist, did it as an experiment. When confronted with being depicted as a modern day Shirley Temple, how will the man who doesn't know how to feel feel?

Elliott just smiled crookedly and went on removing the rust from his father's old Black and Decker saw, that improvised record on which his (what was that she said, inter-planetary?) friend carved a massage to his kind before beaming it to space using a primitive computer game and an umbrella. Decades have passed, but Elliott could still remember what it felt like to stand in the heart of the forest shouting "It's working! E.T., It's working!" Total awe; honest cheerfulness; a creeping fear. How is it possible to clearly remember feelings that you can no longer feel?

Maybe, he thought, I'm like a man who went blind but can still remember the color red. Maybe, he said to Melissa as he glanced over the carbon copy of his childhood home, it really is just a matter of sensitivity threshold.

The kids came, wept and went. Gertie came and stayed. She made it clear that she wasn't going to let the only brother she had left beat cancer on his own.

The cancer, for its part, made it clear that it wasn't going to just roll over and die. Elliott's contacts at NASA cleared the path to any treatment center and lab across the States, but no expert could stop the metastasis. Seven months after his diagnosis, Dr. Williams started speaking to his patient in terms of acceptance.

Elliott was as indifferent as expected. Gertie, who never got to properly say goodbye to Michael before his sudden heart failure, was determined not to leave loose ends with the family's middle child as well. She asked Elliott questions that she never asked before, and he tried to answer in his aloof fashion. Why were you waiting outside night after night? Because that's exactly what I did after the first time I bumped into him, and one night he came. It must have been the smell of candy. You know how he loved Reese's Pieces. Why did you redesign Mom's house back to the last century? Because I thought that if everything was back the way it was, maybe that would make him come back. Naive, I know. Elliott, why did you ever think he was going to come back? Because he promised me, Gert. He promised.

E.T didn't actually promise. Gertie was too young and too upset to remember, but the exact words he said before he got up the ship's ramp and went home were "I'll be right here." Elliott himself never took it as a promise to return; he waited in front of the shed with faith, not expectation. Only now, nearing the end, he allowed himself to offer a different interpretation. To consider himself cheated, simple as that.

He's the reason you don't have any friends, Gertie told him one night when Melissa was in the kitchen. Elliott knew she was right. NASA's scientists never managed to explain what made the hearts of a boy and an alien beat in perfect symmetry, fade simultaneously -- and at the last minute go their separate ways, one to life and the other to death, albeit temporary. Whatever it was, the sensation that your own heart is entangled with the bright-red heart of a creature who's powers you'll never understand was not an easy habit to kick, and not at all possible to replace. So Elliott never bothered trying, and Gertie thought: if it wasn't for the vigorous courting of Melissa, who first met him as a patient, it's doubtful her brother would have ever found anyone to share anything with in this world.

That night was Elliott's last in front of the tool shed. At 3:00 a.m. he went inside and told Melissa that that was that. He was done waiting for his inter-planetary friend. Then he tossed the bag of Rees's Pieces in the bin, put the blanket and the flashlight next to the shriveled Geranium, took off his clothes and got went to bed. Melissa set up beside him and stroke his head, and he told her for the millionth time how he cut his finger on the Black and Decker and said 'ouch' and watched wide eyed as E.T.'s finger lit up like a Christmas tree and cured the cut. I wonder if it works on Cancer, Elliott Said and laughed humorlessly. Melissa got up and walked quietly to the bathroom. She didn't want to cry in front of him.

The next morning he couldn't get out of bed. The sun was just setting when Gertie called an ambulance despite his feeble protests, and Melissa kissed his burning forehead and promised she'd get to the hospital as soon as she was done packing for a long stay. Elliott chuckled and choked. The paramedics gave each other a look that Gertie has already seen once, over Michael's bed.

Melissa finished packing and stood in the middle of the bedroom, trying to remember what it was she thought she'd forgotten. Gertie walked into the room, gasped and pointed at her. No, not at her; Gertie was pointing at the Geranium. Melissa saw the brown leaves turn green and the flowers raising their red heads before she fainted.

They were not surprised when a freaked out nurse called from the hospital and informed them that Elliott was missing. They were not surprised at dawn, when a police officer showed up at the door and said that his body had been found in the glade. Melissa mumbled that it didn't work on cancer after all. Gertie said ouch.

They only had a moment. A few hours of moonlit night, hardly any compensation for eighty two years. Melissa and Gertie never found out how they spent their time together, but between sunset and sunrise they enjoyed a guessing game."'I just hope," said Gertie, "that he's not trying to ride his bicycle again."

"I guess we worry about him differently," said Melissa and smiled. "I sure hope he is."