It is never an easy decision for farmers to adopt new agricultural technologies, such as a new crop variety. A season of lost or underperforming harvests can have dire consequences for households dependent on farming for their livelihood. That is why Joane Nkuliye's story is as much about her courage as it is about the impact of improved crops.

Joane was one of the earliest adopters of beans biofortified with higher levels of iron in Rwanda. Beans are the single most important staple in the Rwandan diet, and Joane appreciated the promise of improved nutrition inherent in biofortified beans, which can provide up to 60 percent of a consumer's daily iron needs. Across Rwanda, more than one in three children aged under five lack enough iron and, consequently, face increased risk of impaired mental development and learning capacity. Women are also especially vulnerable to iron deficiency, which increases their risk of dying during childbirth and impairs their capacity for physical labor. 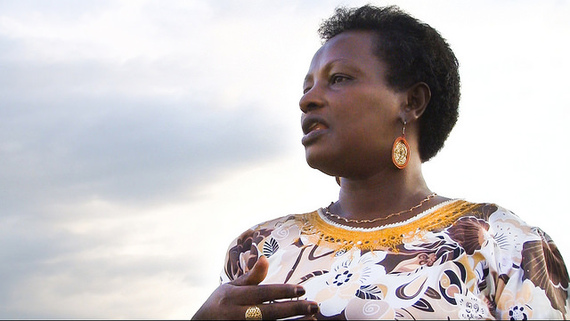 Increased yields quickly translated into increased earnings. Those earnings have allowed Joane to expand her farmland to 50 hectares, devoting more than one-fifth to iron beans alone and the rest to bananas, pineapples, papaya, and maize. Joane calls the iron beans "miraculous" for the impact they have had on her fortunes, and she enthusiastically champions their adoption in Rwanda. Today, three in ten bean farmers in the country have grown at least one of the ten iron bean varieties that have been released.

Joane and her Rwandan fellow adopters are just one of more than 15 million people now benefitting from biofortified crops, in eight different countries directly under the HarvestPlus program. More than 50 countries have either released or are currently testing biofortified crops, and the number continues to grow.

Biofortification is an agriculture-based strategy for combating micronutrient deficiency, a global public health concern of epidemic proportions. Some two billion people around the world are deficient in micronutrients (vitamins and minerals). Their condition is also known as hidden hunger, and results in mental impairment, poor health, low productivity, and even death. For children, the effects of hidden hunger on health are especially acute during the first 1,000 days between conception and their second birthday. More than one million children die annually due to hidden hunger.

Using conventional plant breeding techniques, biofortification develops staple food crops that are rich in vitamins and minerals. The breeding process also strives to make high yields a default trait. Once released, biofortified crops sell for the same price as non-biofortified varieties. Therefore, farmers and consumers who swap a non-biofortified variety for a biofortified one get the extra minerals and vitamins for free. The staple food crops targeted for biofortification are consumed regularly by populations in largely rural, remote areas in developing countries where micronutrient supplements and fortified foods are not adequately accessible or are deemed too costly.

Following an up-front investment in research and breeding, biofortified crops are made available as public goods, and countries can use them year after year without recurrent costs. Just as importantly, people grow and consume the crops over and over, improving their nutritional status through the foods they are already familiar with. That is a signature advantage of biofortification.
In addition to being nutrition-smart, biofortified crops are also increasingly bred to be climate-proof, piggybacking on plant breeding efforts to adapt crops to climate change. Biofortified beans, for instance, can tolerate drought and heat better than bean varieties introduced in years past. Drought tolerance is a trait also shared by vitamin A-biofortified maize and iron-biofortified pearl millet. All biofortified crops developed and delivered by HarvestPlus and partners also boast some degree of resistance to common diseases and viruses.

The impact of biofortified crops on consumers' nutritional and health status is now supported by a growing body of evidence. Recent peer-reviewed studies published in leading scientific journals demonstrate those impacts on children and women. Children in Mozambique who consumed vitamin A sweet potato experienced a significant reduction in the prevalence and duration of diarrhea. Indian children who ate bread made from high-iron pearl millet registered a reversal in iron deficiency and improvement in physical activity and cognitive performance within four months. In Rwanda, daily consumption of meals with high-iron beans helped young women prevent and reverse iron deficiency in just four-and-a-half months.

More studies are in the pipeline, but the evidence so far justifies the growing confidence in biofortification as an effective nutrition intervention. In nominating four scientists working on biofortification for its highest annual accolade, the World Food Prize has joined in recognizing the impact and potential of this novel intervention. I am honored to share the award with my fellow pioneers in biofortification. It has truly been a shared effort, involving hundreds of partners around the world.

HarvestPlus has set itself the ambitious goal of reaching at least one billion people with biofortified crops by 2030. To achieve that goal, HarvestPlus must continue to strengthen its partnership with crop research, breeding, and delivery organizations around the world. Scaling up biofortification also requires deepening engagement with national governments and multilateral organizations that set local and global nutrition agendas.

A major determinant of national health and wellbeing is the quality of diet and sound nutritional status. There are many ways that agriculture can contribute to reducing malnutrition. Biofortification is just one such intervention, albeit one that is highly cost-effective, proven, poised to expand, and has the potential to help reduce suffering for literally billions of people. Our hope is that its success will motivate agricultural policymakers to give a higher priority to the primary role of agriculture to give health.