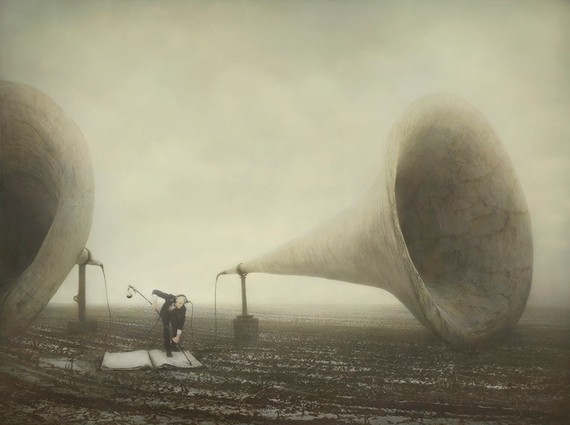 Robert & Shana ParkeHarrison, First of May, 2015, Precipice series, Pigment print, Total edition of 7, 30 x 40 in., 40 x 53 in. Courtesy of Catherine Edelman Gallery.
ParkeHarrisons' remarkable pigment print is a quintessential surrealist/dada/performance photographic document in which a man receives information over the airwaves and transcribes it at the same time.

Downtown West Palm Beach is a stone's throw from the tropical island of Palm Beach on the east coast of Florida, close to where the mighty Gulf Stream current of the Atlantic Ocean flows, which helps generate perfect weather during the winter season and makes the area's air quality arguably the best in the nation. Palm Beach County is one of most popular travel destinations on the Southeastern seaboard, with its pristine beaches, cultural attractions, outstanding restaurants, and distinguished museums and galleries all providing a lively supportive spirit to the vibrant local art scene, which continues to energize the downtown locale. In the last two years, West Palm Beach has received international attention with the annual CANVAS event, in which muralists from around the world are commissioned to create remarkable large-scale paintings on available building façades along the city center corridor, making the thriving arts district also one of the world's most ambitious outdoor museum shows. The community always has been encouraging of art initiatives, including the latest round of a $60 million expansion of the nearby Norton Museum of Art, while downtown West Palm Beach is experiencing a construction boom and a renaissance of sorts that has acted as an invisible magnet, drawing in thousands of people who want to enjoy the adventuresome vitality offered by its metropolitan landscape. So, it should be no surprise that the timing is perfect for Art Miami, one of America's premier art fairs, to set up shop in the very heart of downtown, taking advantage of the creative dynamism this exciting city provides and the traditional strong interest in serious art collecting that is a tradition in the Palm Beaches.

In what seems to be the most anticipated and talked about art event of the Palm Beach season, Art Miami, the longest-running continuous art fair in America, is presenting Palm Beach Modern + Contemporary, which will debut at the fair's downtown pavilion site on Thursday, January 12th (and run through Sunday the 15th). This highly respected and distinguished showcase for internationally renowned artists will open with a VIP Preview benefiting the Palm Beach Zoo & Conservation Society and sponsored by Christie's International Real Estate. With a worldwide reputation for excellence, there's no doubt that a fair from Art Miami coming to Palm Beach County during the height of the season undoubtedly will fill a welcome niche in the local art collecting landscape.

Palm Beach Modern + Contemporary, which will offer investment quality works from the 20th and 21st centuries as well as mid-career artists with impressive auction records, will take place in the modern setting of a 65,000-square-foot clear span pavilion located between CityPlace and the luxurious Hilton West Palm Beach. Centered at the major crossroads of Lakeview Drive and Okeechobee Boulevard at Dixie Highway, this fair city of 100,000 residents and visitors can enjoy at the pavilion a remarkable variety of exemplary work at a major art fair. It's about time.

A massive, towering white tent covers the entire city block, which is a masterpiece of engineering and a perfect accompaniment to the masterworks that will be on display. None of this would have been possible without the foresight of the City of West Palm Beach, and the welcome support of Mayor Jeri Muoio. Art Miami Founder and Fair Director Nick Korniloff said, "I started my career in Palm Beach, so it is an honor to bring back a much needed first class high quality Modern & Contemporary Fair that matches the culturally savvy lifestyle and philanthropy of the community." Korniloff's decades of experience is what makes this fair among the best in America and around the world. The fair also has partnered with the historic Ann Norton Sculpture Gardens, Alexander W. Dreyfoos School of the Arts, Cultural Council of Palm Beach County, Palm Beach Zoo & Conservation Society, Norton Museum of Art and Perry J. Cohen Foundation. Palm Beach Modern + Contemporary will present an exhibition curated by Jeffrey Deitch, featuring works by Francis Picabia from the Jeff and Mei Sze Greene Collection, with additional selected works currently on display at The Museum of Modern Art through mid-March. An impressive group of international galleries from cities around the world, including Paris, Amsterdam, London and Tokyo will complement the line-up from U.S. cities such as New York, Chicago and Los Angeles. While it's not possible to explore everything on view, the following is a selection of my favorite artworks:

Robert and Shana ParkeHarrison (work pictured above) have been taking the world by storm over the past six years by creating a totally unique genre within the history of contemporary photography. This talented couple fabricates remarkable fantasies under the guise of environmental narrative performances, using a strong dash of surreal imagination coupled with inventive theatrical constructed stage sets that they meticulously photograph with perfected panache and dynamic dramatic dioramas. Catherine Edelman Gallery, Chicago. (http://edelmangallery.com/) 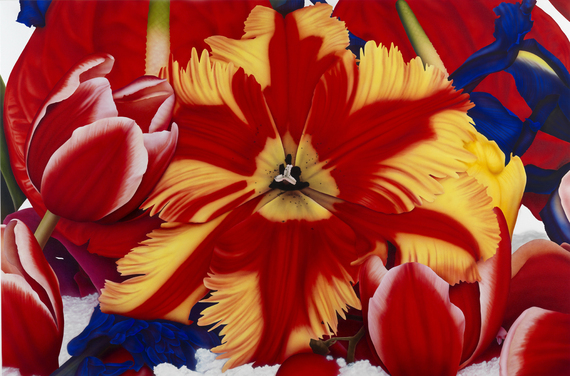 British artist Marc Quinn creates up close studies of floral compositions and organic materials that seem to transcend traditional conformity with oversized depictions of compositions that are bigger than life. This successful formula also has developed into large standing "flowering sculptures" of an impressive towering scale that are unforgettable. Osborne Samuel Gallery, London. (http://www.osbornesamuel.com/)

Ed Ruscha not only is considered one of the greatest contemporary artists in California, but is recognized throughout the world as a highly affecting innovator. Ruscha first came to prominence in L.A. in the late 1950s, making small collages that were influenced by those of Rauschenberg and Johns. As the collages were polished and refined, he began employing words and iconic images in unique ways, ultimately discovering a harmonious balance that through recognition allowed the artist to create paintings utilizing single words and phrases as an early pioneer of this genre. ARCHEUS/POST-MODERN, London. (http://www.archeus.co.uk/) 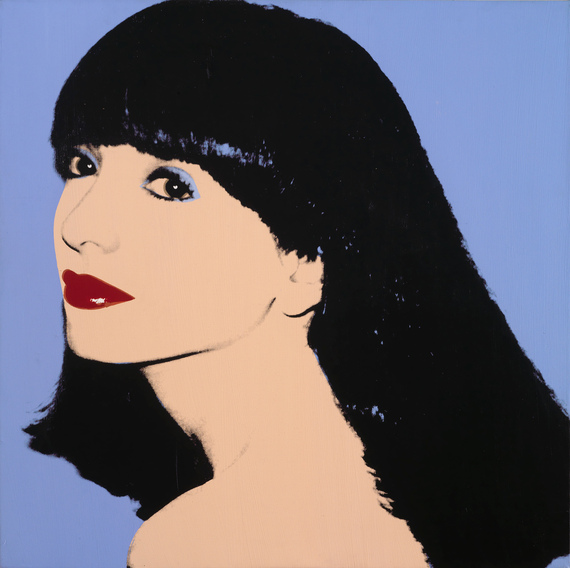 Andy Warhol's revolutionary style of taking ordinary commercial images and placing them on silkscreened canvas was considered preposterous at first, with his earliest show of Campbell Soup cans imagery eliciting vociferous, negative responses from both the art world and the general public. His early iconic silkscreen portraits of famous personalities like Marilyn, Jackie and Elizabeth Taylor were off-register purposely, but eventually became recognized as brilliant while adorning the covers of Interview magazine. Cordeiros Galeria, Portugal. (http://www.cordeirosgaleria.com/) 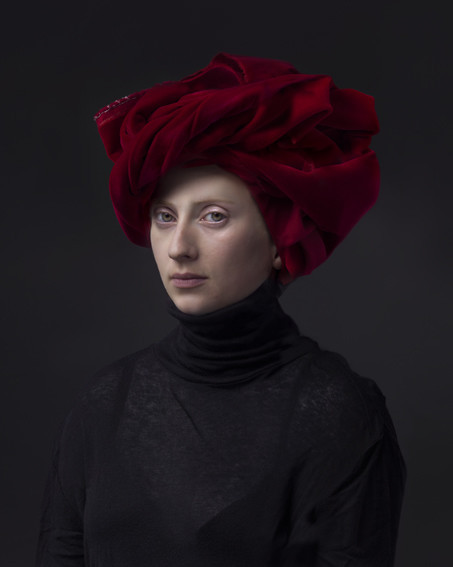 Another slant on portraiture is Hendrik Kerstens' twenty-year investigation of photographing his daughter in the style of classic 17th century Dutch painters. Occasionally, these graceful and skillfully composed portraits provoke conversation and curiosity, as he often uses non-traditional materials to recreate the Dutch portraits, such as a grocery bag or paper towels as headpieces. He also has the customary lighting and austerity in his photographs that are reminiscent of masters such as Vermeer. Amstel Gallery, Amsterdam. (http://www.amstelgallery.com/) 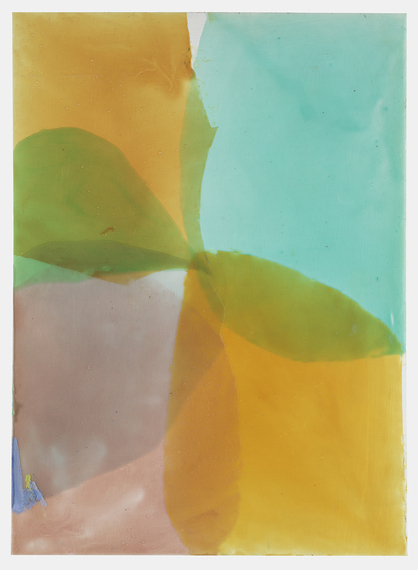 Jill Nathanson is a talented painter who makes magic on canvas by using a technique of poured polymer, which forms overlapping layers of translucency that provide unfamiliar albeit fresh gorgeous hues and are delightful to examine and savor. Over the last four decades, she has deepened her study of color dynamics through methodically delving into chance and risk to ultimately create unity. Berry Campbell, New York. (http://www.berrycampbell.com/) 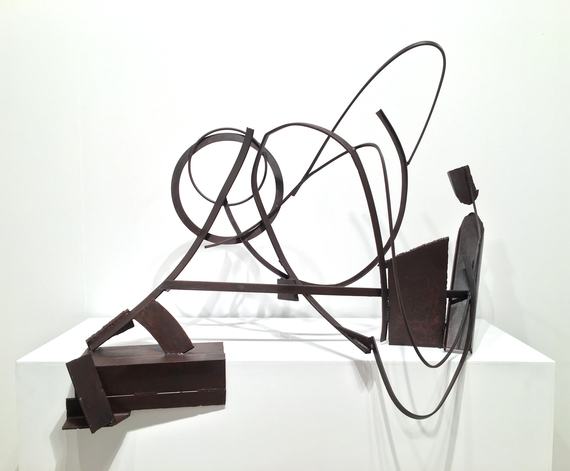 Anthony Caro is one of the titans who played a pivotal role in the development of 20th century sculpture. He is a well-respected abstract sculptor who came to the public's attention with a show at the Whitechapel Gallery in 1963, where he exhibited large abstract works that stood directly on the ground. He joins Mark di Suvero and Chamberlain in providing history with a completely new voice from the way sculpture was previously perceived, and he was remarkably influential in the development of three-dimensional art. C. Grimaldis Gallery, Baltimore. (http://www.cgrimaldisgallery.com/) 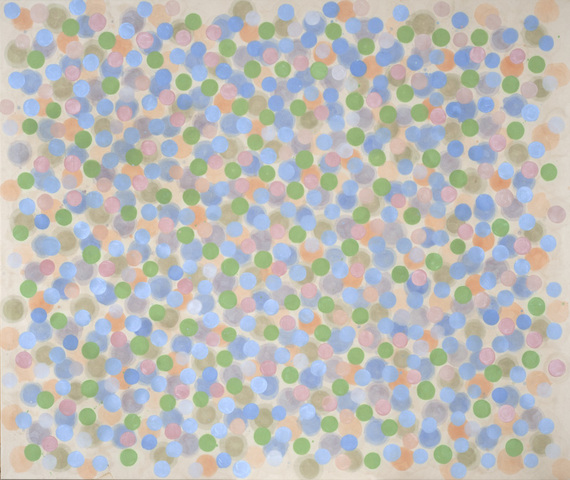 Thomas Downing, like Anthony Caro, was a great explorer of forms and movement, and this untitled painting on canvas of repeat dot irregular patterns is historically a fascinating picture when you consider it was executed prior to 1960, over forty years before Yayoi Kusuma's overall dot paintings and Damien Hirst's recent massive spot paintings. The only real difference is that the work illustrated here seems far superior and engagingly more handsome than others who incorporate spots. CONNERSMITH., Washington D.C. (http://www.connersmith.us.com/) 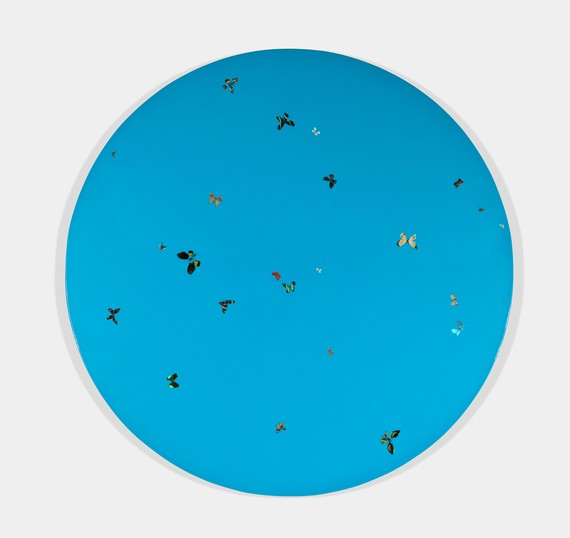 Damien Hirst has been the art world's enfant terrible whose eclectic vision and preoccupation with life and death have manifested itself in subjects such as floating sharks in formaldehyde to prescription pill cabinets that could either cure you or kill you. Fortunately, butterflies are safe and incredibly beautiful themes that like Hirst's identifiable spots, have become striking iconic monuments in contemporary art. Arcature Fine Art, Palm Beach. (http://arcaturefineart.com/)