1322
Artificial insemination (referred to as AI until the 1980s) was first used successfully by the Arabs on mares.

1425-1474
Unofficial history claims that the first attempts to artificially inseminate a woman were done by Henry IV, nicknamed "The Impotent".

1784
The first artificial insemination in a dog was reported by the scientist Lazzaro Spallanzani (Italian physiologist,1729-1799). This insemination resulted in the birth of three puppies 62 days later.

1799
This method of conception was first attempted on a human being in the year 1799 by the English physician Dr. John Hunter.

John Hunter (1728-93) was a brilliant Scottish surgeon known for pioneering research into venereal diseases, child development and the lymphatic system, among many other things. Although he liked to experiment on himself -- particularly unfortunate in regards to his research into syphilis and gonorrhea -- the official surgeon of England's King George III was also was known to instill within his patients an equal zeal for self-experimentation.

When a young married man, desperate to have a child with his wife, came to him in 1790 with a grim condition known as hypospadias, in which the urethra basically takes a wrong turn out the underside of the penis, Hunter developed a plan. He equipped his patient with a collection of large syringes and a prescription for frequent masturbation. He was to collect his semen and inject it into his wife's vagina. Tragically, the exact details of their bedroom antics are lost forever, but the fellow did reportedly follow doctor's orders over the course of two years. By most accounts, a single pregnancy resulted, and Dr. Hunter had proven the possibility of artificial insemination in humans. But it would be a while yet before any physician would formally take up the cause of assisted reproduction.

1866
The practice spread to the United States in 1866 when Dr. J. Marion Sims of North Carolina conducted a series of fifty-five inseminations with varying degrees of success.

1884
The earliest recorded AI in a medical institution took place at the Jefferson Medical College in Philadelphia by Dr. William Pancoast. It was so secret that even the woman being inseminated wasn't told that the sperm was from a donor, not her husband. A fascinating story worth telling here:

In 1884, Dr. William Pancoast of the Jefferson Medical College in Philadelphia went rogue and decided to have a little scientific fun with one of his patients, a Quaker woman who had long been unable to conceive. After many examinations, he decided that the fault in fact lay with her husband's low sperm count. The man, an elderly merchant many years older than his wife, was officially shooting blanks.

Rather than inform her and her husband of the sad state of affairs and move on from a point of full disclosure, Dr. Pancoast summoned the wife to one final "examination." As the woman lay unconscious and chloroformed on his table as six of Dr. Pancoast's students looked on, the good doctor injected into her cervix a large syringe full of semen - freshly donated by the student democratically deemed by the group to be the most handsome. 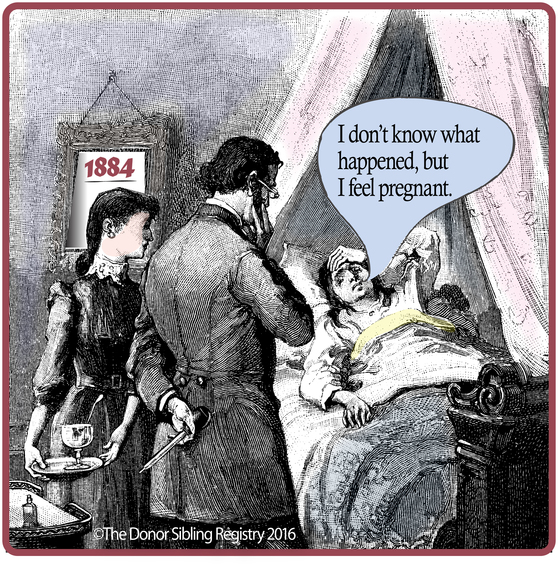 This unnamed woman delivered a healthy baby boy nine months later. Presumably, all were ecstatic. The only problem was that Dr. Pancoast never actually informed her about what he did to her on the table that fateful day. Whether it was to spare her the embarrassment of her husband's sterility, or whether it was simply to see if he could do it at all, Dr. Pancoast's experiment remained a secret success for 25 years.

It was only after Dr. Pancoast died -- a quarter-century after the successful insemination of his presumably pleased patient -- that the truth became known. In 1909, one of the students present that day, the suggestively named and incredibly handsome Dr. Addison Davis Hard, fessed up and published a letter in the journal Medical World containing all the dirty details. It is interesting to note that Dr. Pancoast did actually inform the woman's husband of what he had done, and that they had decided together to spare her the truth. In addition, before the letter was published, Dr. Hard took it upon himself to tell the by-then all-grown-up baby boy as well. Hopefully, his mother was not a subscriber of Medical World in her old age.

1890-1910
AI gained acceptance and popularity in Europe and Russia. In 1897 Dr. Heape, an outstanding reproductive biologist from Cambridge, reported the use of AI in rabbits, dogs and horses. And in 1899 the first attempts to develop practical methods for artificial insemination were described by Ilya Ivanovich Ivanoff (Russia, 1870-1932). Although Ivanoff studied artificial insemination in domestic farm animals, dogs, rabbits and poultry, he was the first to develop methods as we know today in human medicine.

1924-1928
In 1924, Rohleder in a survey; of the world's literature was able to find only 123 cases reported, whilst in 1928 Engleman, in a further survey was only able to increase this figure to 185, of which sixty-five had been successful.

1941
In the United States alone, AI resulted in ten thousand successful pregnancies. In England, the first publication of a modern account of what was then called 'Donor Insemination' (DI) was produced in the British Medical Journal. The doctor behind the research, Mary Barton, was vilified in the press and condemned worldwide. Dr. Mary Barton stated that over a period of five years about 300 children had been conceived as a result of artificial insemination.

1941
In 1941 it was reported that 9,489 women had been successfully impregnated, and that 97 per cent of the pregnancies had terminated successfully. These figures were compiled from a questionnaire sent to 30,000 doctors, of whom 7,643 replied, and of these 4,049 reported that they had carried out successful impregnations.

1940's and 1950's
AI was carried out discreetly by private medical practitioners. It was decided that it was best to leave unregulated (and remains so today). Parents were told to never tell anyone, not even the child. (This practice of secrecy continues on for decades, and is still recommended by some "experts", even today.)

1951
Further evidence as to the extent of the practice in the United States is the statement made by Ploscowe to the effect that by I95I the number of children born as a result of artificial insemination had risen to 20,000.

1953
As a result of this research, the first successful human pregnancy with frozen spermatozoa was reported in 1953.

1963
At the present time responsible estimates indicate the rate of one thousand to twelve hundred births per year, although higher estimates are offered.

1979
Of 711 physicians likely to perform artificial insemination by donor surveyed to determine their current practices, 471 responded, of whom 379 reported that they performed this procedure. They accounted for approximately 3576 births by this means in 1977. In addition to treating infertility, 26 per cent of these physicians used the procedure to prevent transmission of a genetic disease, and 10 per cent used if for single women. Donors of semen were primarily from universities, were only superficially screened for genetic diseases, and were then matched phenotypically to the recipient's husband. Most recipients were inseminated twice per cycle. Only 17 per cent of physicians used the same donor for a given recipient, and 32 per cent used multiple donors within a single cycle. Only 37 percent kept records on children, and only 30 per cent on donors. The identity of donors usually was carefully guarded to ensure privacy and to avoid legal complications.

These incomplete numbers from 1986-1987 are still used today by the media and by industry experts. This has led many to the false conclusion that there is some entity requiring record keeping on the children born from egg and sperm donations. While SART insists that they have accurate numbers on the number of egg donor births, research finds that more than 40% of parents were never asked to report the birth of their child.

The often-cited figure of 30,000 births per year is based on an extrapolation from a very small number of voluntary survey responses. These figures are further confounded by a sharp decline of practitioners at that time, due in part to increased quarantine requirements (including restrictions against fresh semen) resulting from the circa 1984 discovery that semen could transmit the HIV virus.

Prior to the AIDS crisis, donor insemination was likely much more prevalent in small clinics and doctor's offices in the absence of fresh semen restrictions. In the years following the OTA report, the prevalence of large sperm banks and increasing acceptance and popularity of the technology suggests figures have likely grown considerably. As a result, the OTA figures most certainly under-represent reality.