In recent years American voters are rediscovering a way of voting used during the country's first half-century of existence.

Since the early 1990s, the number voters who cast their ballots prior to Election Day has steadily risen from less than a tenth to about a third. The rise is fueled by two phenomenon. More states are offering early voting options, and once a state adopts early voting more people vote early a part of their election regimen. 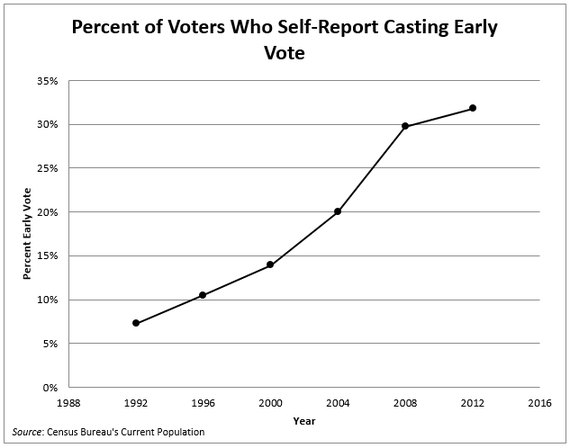 As voters cast their ballots prior to Election Day, they may be surprised to learn they are walking in the shoes of the nation's founders. At the founding, voting was held over several days so that rural voters could have ample time to travel to town and county courthouses to cast their ballots. An extended voting period could not be disrupted greatly by unexpected weather that made rural river crossings impassable. In other words, early voting was matter of convenience. Two centuries later, convenience continues to be the rallying cry of early voting advocates.

Just as an argument for early voting echoes through time, so does an argument against. In 1845, the federal government set a uniform, single day for voting for president: the familiar first Tuesday following the first Monday in November. Among the arguments for a single day was that it would prevent people from crossing state lines to vote more than once. Today, politicians speak of early voting as one way by which elections can be "rigged."

Early voting returned to elections through the military. During the Civil War, soldiers voted absentee by mailing ballots to family members for them to cast by proxy. Later, these practices were formalized through state laws during the early 1900s that allowed ballots to be mailed directly to election officials, and also gradually extended the same privileges to civilians. These laws required voters to have a state-approved excuse for voting an absentee ballot, such as travel or illness.

In a handful of states, primarily in the South and North-East, excuse-required absentee voting is still the only early voting option. In 1980, California pioneered the modern resurgence of early voting by lifting the requirement that a voter provide an excuse to vote by mail. Since then, California and other states, mostly in the West, have innovated permanent mail ballot status and all mail ballot elections. Any qualifying voter can request and cast a mail ballot at their local election office. Meanwhile in the East, Florida, Tennessee and Texas extended in-person early voting to special satellite polling locations in 1996.

There is now tremendous variation in early voting across states, mirroring the differences of states' options. A state, like battleground Pennsylvania, has excused-required absentee voting, and so we should see a single digit percentage of early voting. Other key battleground states, like Colorado, Florida, Nevada, and North Carolina, have more generous early voting. Two-thirds or more of the votes will be cast before Election Day in these states.

Early voting has transformed elections in fundamental ways. A frequent criticism is that early voters should wait until Election Day so that they can be fully informed about the candidates. This criticism would be foreign to voters two centuries ago and arises from the massive flow of information that is part of our modern lives.

I have three responses for those who say we should have no early voting.

First, there are two types of early voters, those who are in a situation where they must cast an absentee ballot and those who choose to do so. Surely, we must allow absentee voting when it is a voters' only option, such as our military deployed abroad in conflict zones.

Second, those who choose to vote early do so when they have made their decision who they will support. The earliest of early voters are people who follow politics closely and will not be swayed by new information. A good number of people could cast their vote today and will not regret their choice on Election Day. Others will continue to wait until they feel they have enough information. Indeed, many people will hold their ballot, and we will see the highest volume of early voting the week before Election Day.

Third, early voting has changed how campaigns release information. The fabled "October Surprise" - where a candidate unleashes a devastating attack the weekend before Election Day - is now mostly a thing of the past. If a campaign has damaging information about their opponent, they can't hold on to it. The target of the attack gets to respond, the media gets to fact checks the opposing claims, and voters can weigh the truth and importance of the information, rather than vote with a gut reaction. Early voting has thus transformed campaigns so that voters are more informed, not less.

Early voting has also fundamentally changed campaigns in other ways. Campaigns now run voter mobilization efforts during the entire early voting period. This gives them a chance to ask more voters to support their candidate, and these contacts have been well-established to increase turnout.

Presidential campaigns and the major parties have more than enough resources to conduct extended mobilization efforts and the run advertising during the early voting period. Where I worry about a negative effect of early voting is for state and local elections, which do not have the same resources. However, in states that publish election results by voting method, more early voters cast a vote in down ballot races than Election Day voters. This may be due to the fact that early voters follow politics more closely than those who wait until the last minute to vote.

Finally, early voting has changed how elections are run. Fewer people voting on Election Day means shorter lines and a better voting experience for voters. Election officials track early voting and share this information with the campaigns. An election pro-tip: if you vote early, the campaigns stop sending you mail, calling you, or knocking on your door.

Despite some naysayers, early voting is wildly popular among voters. More people take advantage of the convenience early voting offers every election cycle. There will still be people who wait until the end, and our election system should and does accommodate these people. But for many others, I would say the notion of an election "day" is antiquated, but it is how our country voted two centuries ago.