If I had a dollar for every time I've seen a social media comment along the lines of "why are Halloween costumes for women so sexy?!" I'd have enough money to march over to my neighborhood Halloween superstore and buy a sexy French fries costume. For young women these days, the process of choosing a Halloween costume usually starts with the question of "to sexy, or not to sexy?" (or in my mind, "to freeze, or not to freeze on a chilly October night?"), and while I can understand the arguments that sexy Halloween, now not-so-feministly dubbed Slutoween, offers benefits of indulging fantasy and it being socially acceptable to bear one's body in a sexually forward manner, it's nevertheless curious that the holiday has evolved such an across-the-board libidinous costume culture.

So, how did Halloween transform from a harvest tradition of apple-bobbing and candy-giving largely centered around children to a night of hangover-making, adult-themed throwdowns? Blame New York.

The Halloween parade in New York City's Greenwich Village began in 1973 as a family-and-friends promenade from house-to-house organized by a local puppeteer and mask-maker. It quickly became a neighborhoodwide party, however, and since the Village was New York's de facto gay district, the gay community cottoned to it. The event, with its drag outfits and otherwise rebellious costuming, became famous in New York and across the country, as did similarly bawdy Halloween parties in San Francisco's Castro neighborhood and in West Hollywood.

That it took a tawdry turn in the 1970s, which makes sense, since these baby boomers grew up when Halloween as we know it today was really starting to develop. And by "develop," I mean it was becoming far more commercialized as candy makers and retailers started realizing the profit potential of kids' costumes and trick-or-treating in the 1940s and 1950s. In that case, those Greenwich Halloween revelers likely had grown up with Halloweens more festive than ever before, and capitalistic sight lines were by then set on young and old alike. In her 2012 thesis, "The Rise of Slut-o-ween," Elizabeth A. Greer notes how "marketing began to increasingly target adults as stores sold both costumes as well as other Halloween products like carving pumpkins and house decorations to attract a broader audience with increased purchasing power."

Meanwhile on the costume front, popular options for boys and girls have long been gender-stereotypical, as baby boomer girls went to door to door as angels, brides and princesses, while neighborhood boys went candy begging as soldiers and hobos. In her 2006 study of 469 children's costumes, sociologist Adie Nelson found little has changed, with girls' options "clustered in a narrow range depicting beauty queens, princesses, and other exemplars of traditional femininity." When Greer looked at kids' costumes more recently on the ToyRUs website, the store served up 82 "occupation" category choices (i.e. fireman, doctor, police chief) for boys but only 44 for girls (i.e. veterinarian, nurse, cowgirl), most of which were designed with mini-skirt motifs. In many ways then, the ready-made Halloween costumes designed for women are simply grown-up, hyper-sexualized versions of what was sold originally to little girls.

But by far the most scandalizing twist in the history of Slutoween is that we have Tina Fey to thank for it officially entering the pop cultural zeitgeist via her 2004 masterpiece -- and I don't say that sarcastically -- Mean Girls. In it, Lindsay Lohan's character observes that "Halloween is the one night of the year when you can dress like a slut and no other girls can say anything about it." And, boom, Slutoween was finally, succinctly put into words.

A couple years later in 2006, the New York Times article "Good Girls Go Bad, for a Day" spoke with a costume merchant who said that since the early 2000s, sexy costumes had become so popular they comprised "90 to 95 percent of our female costumes." Another costume salesperson, in fact, told the paper her store required three different "sexy" categories to help customers sift through the expansive cleavage-happy inventory. So really, the reason Halloween costumes for women (and tween and teen girls) are so absurdly sexy is that women (and tween and teen girls) continue to buy them. Supply has merely ballooned to meet annual demand.

Today, however, I'd argue that we've crested peak "sexy " and are somersaulting now into an era in which "ironic sexy" is the only way to have fun anymore. For all the folks who claim empowerment from donning Halloween thigh high and hot pants ensembles, there are just as many who contend that the Slutoween ethos degrades and objectifies women, and ironic sexy sits uncontroversially (and coldly... again, it's late October!) in the middle of that Overtly Sexy Costume versus Not Overtly Sexy Costume Venn diagram inevitably debated and dissected around this time every year. So, if you're looking for me come Halloween, I'll be the sexy Walter White in a bald cap and neon yellow Hazmat cut-offs celebrating... oh, who knows anymore.

In case you need a last-minute costume idea... 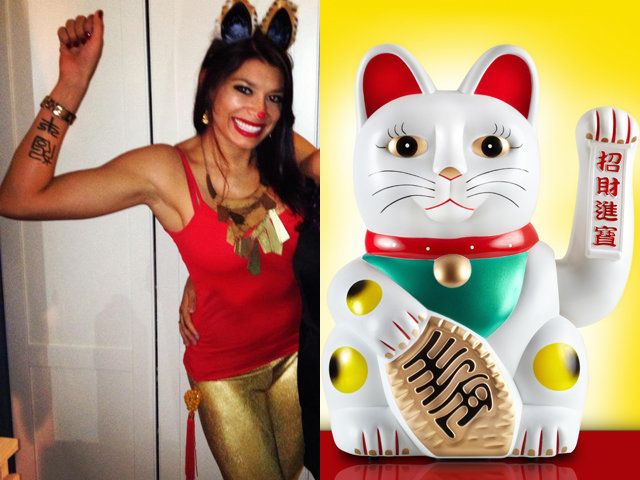 1 / 10
Lucky Cat
This costume is both creative and fairly easy to execute well. You need some gold leggings, decorated cat ears, a tassel and some Chinese letters on your forearm. (You also get an unintentional workout from lifting your arm up and down all night.)
Courtesy of Brittany Wallace