What comes to mind when you hear about Republic of Macedonia as a tourism destination? Unless you are from this region, a history buff or extreme travel junkie, you probably know very little about one of the newest European countries in the south Balkans. In fact, less than handful guidebooks have been written on Macedonia and current travel information is hard to find.

It is noted that civilization in Macedonia flourished between 7000 and 3500 BC. Over centuries, Macedonian kings, Greeks, Romans, Byzantines and Ottoman Turks ruled the nation. After public uprisings and peaceful demonstrations, Macedonia received independence from Federal Yugoslavia in 1991.

During ancient times, Macedonia was the largest kingdom of Alexander III the Great. Statues of Alexander and his father Philip II of Macedon are proudly displayed throughout the country. One of the two largest airports in Macedonia is also named after him.

Native Macedonians were mountain people who raised sheep, practiced agriculture and created handicrafts. Villages were spread out across mountainous terrains of the country, making them safe havens against foreign invasions. Their traditions are similar to those found in Eastern and Central Europe. The modern writing system in Macedonia, known as Cyrillic shares commonality with Russian, Serbian and Bulgarian.

Macedonians today are very peaceful, happy and friendly people. The most commonly observed religion in Macedonia is Orthodox Christianity, while a third of the population is Muslim. It is interesting to see how Christianity and Islam are practiced alongside without any conflict, when you hear church bells and Islamic call for prayers several times a day. 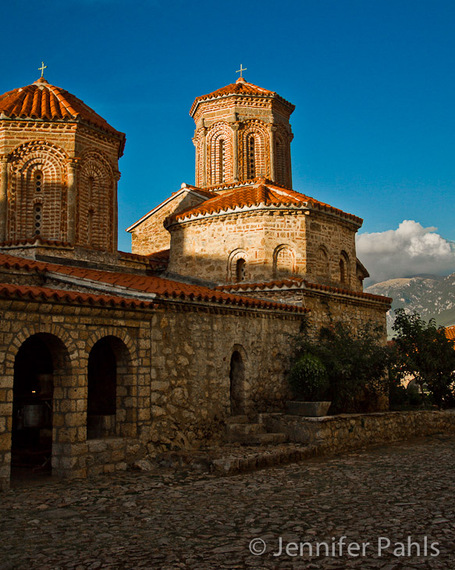 Skopje Alexander The Great International Airport offers daily departures to Austria, Croatia, Germany, Italy, Turkey, Serbia, Switzerland and UK. Many visitors drive from neighboring countries of Albania, Bulgaria, Greece, Kosovo and Serbia. Highways are modern and driving is quite easy. Gas stations and tollbooths are frequent but many offer free Wi-Fi. Only in the countryside, there are not many street signs and places can be hard to find. Even though the people are very friendly, language can be a barrier, especially in villages. You can drive by an interesting historic site or neighborhood restaurant, and easily miss it if you don't know exactly where you are going. It is advisable to hire a car with a local driver who can also double as a guide.

It is fairly cheap to travel in Macedonia as compared to other countries in Europe. Macedonian Dinar is the official currency in Macedonia, although most vendors will happily accept Euros. Credit cards are accepted at most places.

It is possible to visit Macedonia anytime of the year. It follows climatic patterns of the Northern Hemisphere. Certain areas can get cool even in the summer due to mountainous landscapes. Lake regions are busier during summers, while ski getaways are popular in winters.

The food in Macedonia is influenced by European, Turkish and Slavic cuisines. Use of herbs and spices add unique flavor to dishes cooked with care and precision. Macedonians tend to eat locally grown foods that are found in season. Practically everything is made from scratch in conventional ways. Sheep farms, vineyards and fruit orchards are found all over the country. 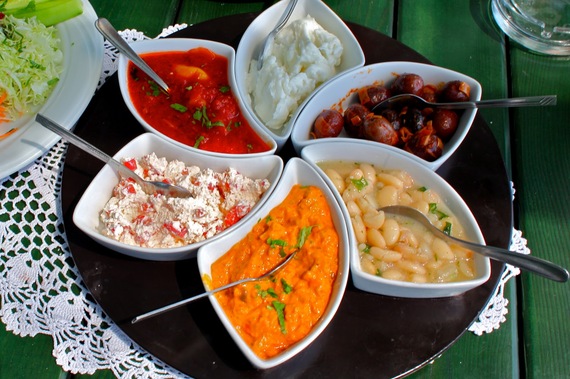 Wine production in Macedonia dates as far back as 13th century BC. From the time of Alexander The Great up until Roman and Turkish rules, wine consumption in this region has remained prominent. There are namely three wine regions in Macedonia - The Central (Povardarie), Western (Pelagonia-Polog), and Eastern Regions (Pchinya-Osogovo). There are altogether 80 wineries in Macedonia.

Although tour operators like Macedonia Experience are beginning to focus on showcasing the ancient culture, wine country, outdoors adventures and culinary highlights, the country remains largely underexposed to international tourists. If someone was looking for an off the beaten path destination with a largely preserved culture, unspoiled by herds of tourist buses, Macedonia is a good place to visit. Villages, lakes, churches, monasteries, mountains and parks scatter the entire country, so it's a good idea to spend a few days visiting several different regions.

Skopje - Capital of Macedonia and the largest city, most travelers make the mistake of stopping only in Skopje on their country hopping tour of the Balkans. Allow for a couple of days to visit the modern city's historic sites, savor ethnically diverse restaurants, and enjoy the vibrant nightlife. Some of the must see places to visit in Skopje are the Mother Teresa's museum and home, Stone Bridge in center of the city, the first railway station in the Balkans, Fortress Kale built in 6th century AD, Churches of St. Andreja -Matka and St Spas (Holy Salvation) and the Old Skopje Bazaar, the second largest Bazaar outside of Istanbul.

Mavrovo - Famous for protected forests, picnic spots, scenic views, and mountain shepherds, the Mavrovo National Park attracts year round adventure seekers. Private guides are available to take individuals and groups on hiking, biking, horseback riding, whitewater rafting and camping tours. Diverse variety of flora and fauna can be enjoyed at the park's numerous valleys, rivers, gorges, falls, glaciers and lake. The park is home to a rare species of lynx and ongoing research ensures the safety of these animals. 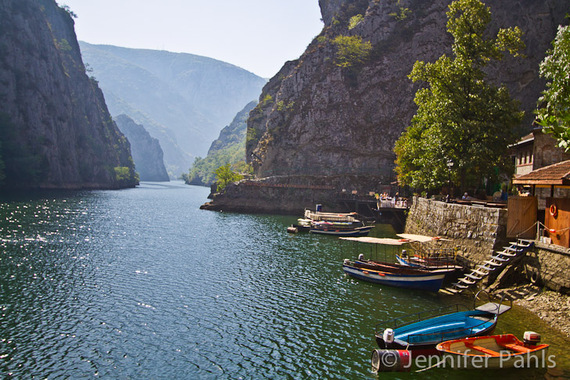 In mid-July, the national festival, Galichka Svadba (Galičnik Wedding Festival) is held in this area. The famous Village of Galichnik, located in the heart of Mount Bistrais a celebratory town for weddings where couples from all over Macedonia enter a competition to have a "Galička" style wedding. For two days, Galichnik becomes an important cultural and tourist attraction. The rest of the year, visitors can pay visits to St Peter's Church and a little museum at Galichnik.

Ohrid-The picturesque city with narrow cobblestone streets, red terracotta roofs, open-air cafes, and a crystal clear lake with a backdrop of mountains, gives the impression of charming lake towns in the Swiss Alps. Ohrid is popular with Macedonians and foreign tourists looking for a quick getaway. Ohrid is one of the 28 cities that is listed as both a UNESCO's World Heritage Cultural and Natural site. 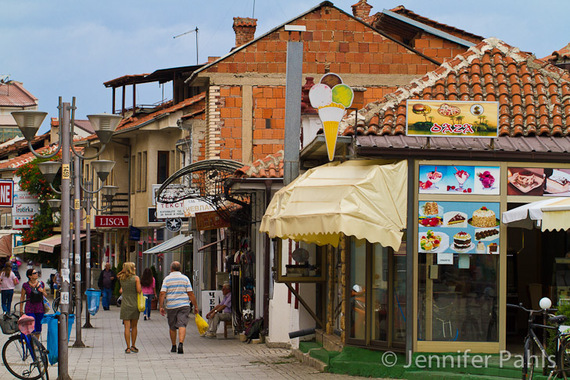 Ohrid is known to have 365 churches at one time, and referred to as "Jerusalem of the Balkans." Numerous hotels and restaurants dot along the lake, making the entire city walkable. Roman amphitheater, Church of St Sophia and St Clement, Tsar Samoil's fortress and Ohrid's marketplace are some of the places to visit.Daily ferries takes passengers from the city square to the nearby Monastery of St Naum. Originally built in the 10th century, the monastery is home to the body of Byzantine St Naum, who is known to have cured patients of mental illnesses.

Krushevo - Worth visiting for its architecture, political history and winter sports, Krushevo is the highest village in Macedonia, located at 4,429 feet (1350 m) above sea level. As the city was rebuilt, an interesting architecture developed. The old-style homes are freestanding, mostly symmetrical, with a well in the ground floor. Painted decorations in blue can be found on the main floor and on the windows. A small balcony with a triangular pediment adds symmetry to the second level of the house.

Traditional Macedonian Independence Day celebrations are held on August 2 every year in Krushevo. The President of Macedonia visits the spot of 1903 Ilinden Uprising, while people dress as Ottoman Turks and Macedonian revolutionary freedom fighters.

DemirKapija valley-No visit to Macedonia would be complete without visiting a winery or two. An overnight stay at Popova Kula Winery, located in Povardarie region in the DemirKapija valley is perhaps the perfect way to learn about Macedonia's wine production. Popova Kula (meaning Priest's Tower) began in the 13th century and resurrected in 2004. Hike and bike in the surrounding valleys, take a tour of the winery, enjoy a tasting dinner and relax in the comfort of the rustic hotel. 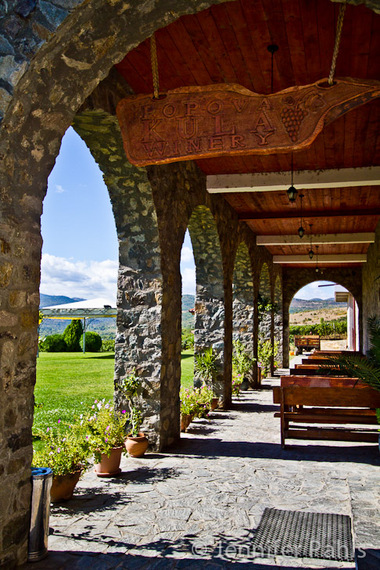 Read more about my travel in Macedonia.

For more information about traveling to Macedonia or to book a trip, visit Macedonia Experience.