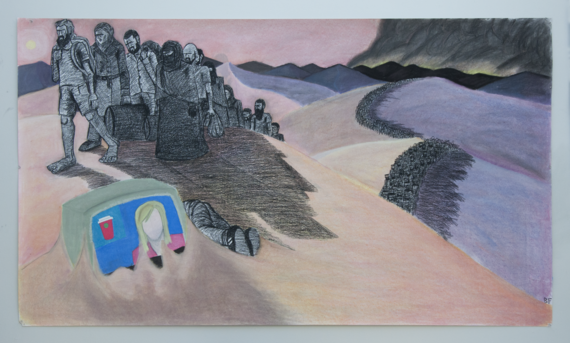 My money is on the Millennials. Particularly those at the edge of the generation, just now coming of age and venturing onto the world stage.

Faced with problems local, national and global that earlier generations could barely have imagined they remain undaunted. They take on mountainous debt to get good educations despite bleak job prospects, they resist any attempt to be told how to act or think or vote, and they expose themselves to the world on social media to an extent utterly frightening to their grandparents.

As one grandparent, this writer can only applaud.

This is a snapshot of one college student whom I applaud. I have never met emerging artist Brennen French; I was introduced to his art because despite the thousands of miles and several generations that separate us it speaks my language.

French, the son of a college professor and a retirement home administrator, grew up in one of the many American small towns that saw the economy tank and opportunities vanish in the last half of the 20th century, when plants closed and jobs went overseas. Though his own family was comfortably middle class, he learned firsthand about poverty, racism and injustice - and seems determined to confront those issues in the best way he can. As his website explains, he "found his voice for justice in his art."

Two works illustrate how that goal is playing out, as French pursues an art degree at Allegheny College in Pennsylvania. "The Rise of Feminism (Break the Chains, Rise Up, Be Free)" (below) is an homage to women from around the world who have made significant contributions to women's rights through their accomplishments in a variety of fields. With a powerfully drawn female figure centering the piece (while breaking her chains,) French has created a design with multiple interpretations, using profiles of some of the women he references. He includes initials just in case, but viewers could recognize many of them without clues: Virginia Woolf, Susan B. Anthony, Ruth Bader Ginsberg, nearly two dozen profiles rising from silhouetted crowds of anonymous others.

In America's Response to the Syrian Migrant Crisis, (above) French uses somber tones to portray an endless line of refugees, fronted by a garishly contrasting image of an American TV talking head, a red Starbucks cup on the screen behind her. "I created this in the winter of 2015," French explains, "to raise awareness of the current migrant crisis. At the time, American news feeds were flooded with the Starbucks Red Cup 'scandal.' I was shocked that news organizations felt this story was important enough to dedicate two weeks' worth of airtime, time that could have been given to discussing the Migrant Crisis."

Voices for justice may be around for a long time yet. 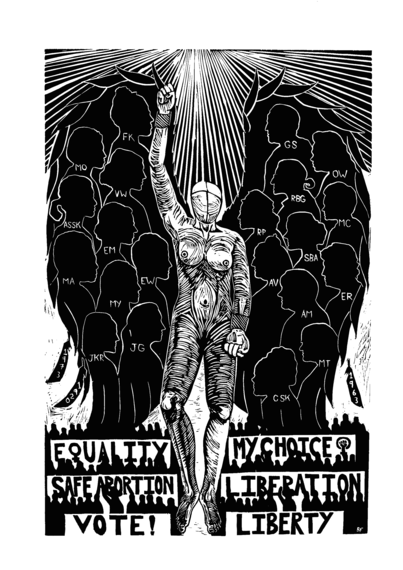