The first anniversary of Dad's death was looming. His ashes were still sitting in a generic plastic urn in his study, surrounded by photographs of his family. And we couldn't decide what to do with them.

We never knew how serious he was, because he didn't write this in his will, but Dad had always said (long before he died, aged 84) that he'd like a Viking send-off. His ashes would be put out to sea on a wooden boat. Then a flaming arrow shot from the shore sets the whole thing alight. A model boat would suffice, he'd said.

I reminded Mum of this as she was trying to think of a final resting place for her husband's ashes. She didn't like that idea at all. My brother, sister and I could also see the potential for disaster: none of us can fire a bow and arrow, and there was a strong chance that at least one of us would start giggling as we kept missing and the tide kept bringing the model boat back to shore, as it surely would.

While Dad may have seen the funny side, Mum was still grieving her love of 61 years and missing him terribly. She wanted his ashes to be treated with loving respect and a private, suitably somber family ceremony.

None of us could think of anything that Mum liked until my sister came across the Bios Urn while scouring the Internet.

The Bios Urn comes in three biodegradable parts. The lower cone holds the ashes, on top of that is a soil and compost mix into which you add a tree, plant or flower seed that's supplied depending on your local climate, or you can choose your own.

Dad loved his English country garden, so we decided to put some favorite flower seeds in the Bios Urn along with the ashes and buried them in a beautiful spot where we could watch life spring from our dear Dad's death. Mum loved the idea and she was sure Dad would have loved it, too.

The Bios Urn was developed by Spanish designer, Gerard Moliné. Since the launch in 2013 by Gerard and his brother, Roger, they have sold nearly 50,000 with little marketing or advertising. There's no sell-by date and it will last until you need it.The company's vision is to replace cemeteries with forests and change the way we view death. 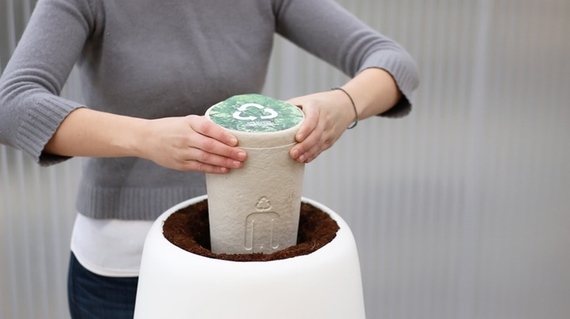 Now the Moliné brothers have designed a new product. The Bios Incube has been created for city dwellers with limited access to land, who want sustainable alternatives to cemeteries for their loved ones and pets. A Bios Urn is placed in the Bios Incube which then monitors your tree's vital signs and will automatically do the watering from the water tank inside the Incube. A phone app provides instant updates on the tree.

A Kickstarter campaign for the Bios Incube has been launched, with special offers for participants. The Moliné brothers will also plant a tree for every donation they receive. With 56 million of us dying every year, burial and cemetery space is running out fast. I know what will happen to me after I die: I'm going to be a tree.