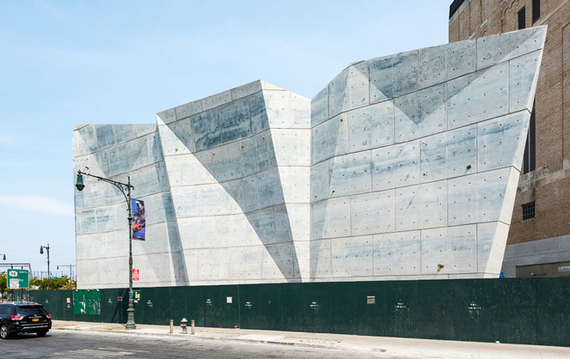 Last week, the New York Times ran a splashy article on Manhattan's new Spring Street Salt Shed. The $20-million, 6,300-square-foot facility will house up to 5,000 tons of sodium chloride, imported from Chile to de-ice the city's roads in winter. Titled "A Building That Resembles What It Stores," the Times feature praises how the architects elevated the mundane function by creating a monumental, origami-like sculpture inspired by salt crystals. Yet, while applauding the building's aesthetics and symbolism, the newspaper neglects to ask an important question about its purpose: Does the city need all that salt?

Road salt can damage both human and ecological health, according to many sources. After snow melts, chlorides from road salt remain in the environment, and there is no natural process by which they are broken down and removed, so they can persist indefinitely, polluting water bodies and hindering survival rates among various species of fauna and flora. Higher salt concentrations in rivers and lakes change their water density, undermining the circulation of nutrients and preventing oxygen from reaching the bottom layers. The US Geological Survey estimates that sodium concentrations in over 40 percent of the country's waterways exceed federal standards. Sodium that makes its way into drinking water supplies can be distasteful to all of us and quite harmful to the third of us who suffer from high blood pressure. Canada officially categorized road salt as a toxin over a decade ago.

More directly, if you've noticed how road salt damages your car, you get a sense of how corrosive it can be. The New York Landmarks Conservancy warns that de-icing products can cause "salt fretting," when masonry surfaces scale and flake, mortar joints degrade, and surrounding vegetation suffers. In a report released in January, the New York City Comptroller found that the city annually spends an average of $1.8 million per inch of snow on road salt--$132 million in 2014 alone. The report concluded that the city often uses more salt than it needs, so dollar for dollar the practice is quite literally doing more harm than good.

Many communities are exploring "nature-friendly substitutes" to road salt, including beet juice and sugarcane molasses. Using cheese brine, Polk County, Wisconsin, cut the amount of salt by 30 percent and the annual expense by nearly a dollar per capita. At that rate, with a population of 8.5 million, New York City could save almost $8 million a year and 175 tons of salt, or 35 times the capacity of the new shed. (I contacted the New York City Department of Environmental Protection to ask whether it has studied alternative methods, but I had not heard back at the time of posting this.) Nearly 30 years ago, in 1987, the New York Times itself encouraged substitutes for road salt, which it estimated caused the US an annual $5 billion in damage ($10.5 billion in 2015 dollars), 20 times the cost of the salt itself. Today the city's "Cut the Salt Campaign" promotes low-sodium diets. Why not low-sodium streets?

As for the Spring Street Salt Shed, the architect's website declares, "We believe that each project must ... tread lightly on the environment...." Does that include a building's contents, or just the building itself?

A perennial question among socially and environmentally conscious architects is whether we are responsible for the impact of our work beyond the building itself. Is it possible to design a "green" missile silo, or sustainable storage for plutonium? Should the use of my projects weigh on my conscience, or is that someone else's problem?

But even the empty shed raises questions about "treading lightly." The structure is composed of 6-foot-thick panels of concrete, an extremely energy-intensive material, since producing a ton of cement requires nearly 5 million BTUs of energy, the equivalent of about 400 pounds of coal. The second most consumed substance on earth (after water), concrete's manufacture is one of the primary producers of carbon dioxide emissions, a major contributor to climate change. Furthermore, the Times article highlights that the concrete was cast from huge molds of polystyrene (the generic name for Styrofoam), which the EPA considers the fifth largest source of hazardous waste in the US. The process of making it can causes many adverse health effects, including skin irritation, respiratory ailments, headaches, and fatigue, and it is classified as a possible human carcinogen. Made from petroleum, a non-renewable resource, polystyrene is not biodegradable and can take decades, even centuries, to break down in a landfill.

A veritable monument to sodium, the Spring Street Shed--and therefore road salt--could be around for a very long time. As quoted in the Times, the architect imagines "visitors in the distant future stumbling upon the shed in the way Charlton Heston's character encounters the Statue of Liberty ruins in 'Planet of the Apes.'" Why build such a functionally specific and long-lasting structure when the function it supports is already outmoded? A spokesperson for the city told the Times that future observers might wonder, "Why did these people worship salt?"